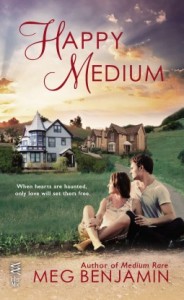 Today, my guest is Meg Benjamin, the author of the Ramos Family/Medium trilogy. Whatever you call the series, the books in that series (Medium Well, Medium Rare and the subject of today’s review, Happy Medium) are chillingly delicious paranormal romances.

But Meg’s post today is all about why she chose to take this walk on the spooky side.

I’m a newbie in the paranormal romance game. Paranormal romances work with a different set of emotions from, say, contemporary romance (where I’ve hung out up until now). Vampires can be scary but also very sexy. Werewolves can evoke that primal dread of being attacked by an animal. Zombies don’t do much for me in the romance department, but they’re really good at evoking horror. The same is true for the wide range of other paranormals, from Eve Silver’s Egyptian demi-gods to Laurell K. Hamilton’s fairy kingdom.

And then there are ghosts. For me, ghosts have a pretty straight-forward effect. They’re all about fear. If you think about classic ghost stories, the old-dark-house-in-a-thunderstorm type, it’s all about what happens on the periphery. The feeling of being watched, of sharing space with something or someone you can’t really see. Until, of course, you turn the corner and…gotcha!

I’ve always been fascinated by ghost stories, and I toyed with the idea of doing one of my own for a long time before I finally got around to it with my Ramos Family Trilogy for Berkley Intermix (the third book in the trilogy, Happy Medium, is now available). It may seem strange to go from writing about romance in the Texas Hill Country (as I did in my Konigsburg series for Samhain Publishing) to writing about haunted houses in San Antonio, but it’s not really that much of a stretch. I love ghost stories, particularly ghost stories that aren’t entirely serious. Even my contemporaries had a touch of threat (I love my villains) and that threat becomes simultaneously scarier and more elusive in ghost stories. Like I said, it’s all about the unknown.

My setting is the King William District of San Antonio, one of the most historic parts of the city. If a ghost is going to hang out anywhere in the San Antonio area, I’d say King William is a very likely spot, given the stately, slightly spooky homes, the San Antonio River with its hanging cypress trees, and those long afternoon shadows you get in South Texas.

My hero is Ray Ramos, the youngest sibling in the family. He has a good business renovating houses, but he’s up against a real money pit of a mansion in King William. He needs a quick infusion of cash to finish the repairs, and he gets it by renting the house out as a séance location for a television medium. Unfortunately, Ray and the medium’s assistant, Emma Shea, discover the house doesn’t just look haunted—it’s actually the home of a very nasty spirit with a real yen for Ray. Between trying to keep out of the ghost’s clutches while doing a bit of clutching themselves, my H/H are kept pretty busy.

Here’s a taste of Happy Medium:

“Join hands everyone,” Gabrielle intoned in her most resonant medium voice.

Ramos gave her a piercing look, then took hold of her hand, extending his other hand across the table to Emma.

Gabrielle’s fingers were faintly damp, but Ramos’s were dry and hard. His calluses rubbed against Emma’s palm. For a moment she felt something like a mild electric shock tingle through her fingers. She pulled her hand away, staring.

Ramos stared back, his eyes wide.

“Take his hand, Emma.” Gabrielle frowned. “We need to get on with this.”

Gabrielle raised her head, gazing up into the dim shadows overhead. “Is there anyone here? We call on you to come forth.”

Across from Emma, Ramos rolled his eyes. He had that sour look again. Just hold on a little longer, and we’ll be out of your way.

Ramos looked at her, then shook his head slightly.

And the candles went out.

Emma’s head shot up, and she turned toward the fireplace. There hadn’t been any flickering, any feeling of a breeze. One moment the candles had been burning, and now they weren’t. She gaped at Ramos, who was gaping back at her, his forehead furrowing. Somewhere overhead a door slammed.

At the head of the table, Gabrielle seemed not to notice. “Spirit forces, we call to you,” she crooned.

Something touched the back of Emma’s neck, a quick brush, so light she wasn’t sure she’d felt it. Then it came again, more definite this time, fingertips along the edge of her shoulder. She whipped her head to the right, but she couldn’t see anything in the gathering darkness.

Ramos’s hand jerked against hers. She turned back to him, but he was watching Gabrielle.

No, not Gabrielle. Beyond Gabrielle, toward the fireplace. The mantle glowed dimly in the twilight, as if there were lights beneath it. Then, one by one, the votive candles thumped to the hearthstone in front of the fireplace, bouncing lightly. Another door slammed upstairs. 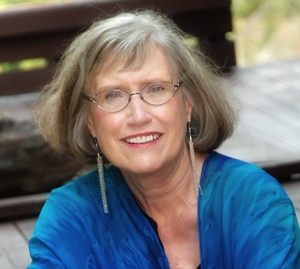 About Meg:
Meg Benjamin is an author of contemporary romance. Her Konigsburg series for Samhain Publishing is set in the Texas Hill Country and her Ramos Family trilogy for Berkley InterMix is set in San Antonio’s King William District. Meg’s books have won numerous awards, including an EPIC Award for Contemporary Romance, a Romantic Times Reviewers’ Choice Award for Indie Press Romance, the Holt Medallion from Virginia Romance Writers and the Beanpot Award from the New England Romance Writers. Meg lives in Colorado with her DH and two rather large Maine coon cats (well, partly Maine Coon anyway).
Her Web site is http://www.MegBenjamin.com and her blog is http://megbenj1.wordpress.com/.
You can follow her on Facebook (http://www.facebook.com/meg.benjamin1), Pinterest (http://pinterest.com/megbenjamin/), and Twitter (http://twitter.com/megbenj1).
Meg loves to hear from readers—contact her at meg@megbenjamin.com.

And if you want your very own taste of scary, Meg will be awarding an ebook copy of the complete Ramos Family Trilogy to one randomly drawn commenter during this tour.

To enter, just leave a comment on this post. For more chances to get your own copies of this terrific series, visit the other tour stops listed at Goddess Fish Tours. 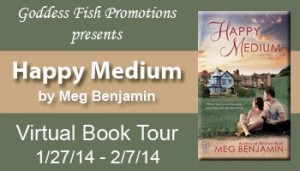