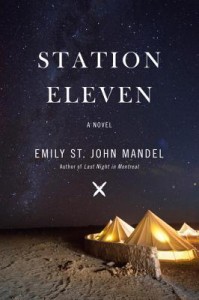 One snowy night Arthur Leander, a famous actor, has a heart attack onstage during a production of King Lear. Jeevan Chaudhary, a paparazzo-turned-EMT, is in the audience and leaps to his aid. A child actress named Kirsten Raymonde watches in horror as Jeevan performs CPR, pumping Arthur’s chest as the curtain drops, but Arthur is dead. That same night, as Jeevan walks home from the theater, a terrible flu begins to spread. Hospitals are flooded and Jeevan and his brother barricade themselves inside an apartment, watching out the window as cars clog the highways, gunshots ring out, and life disintegrates around them.

Fifteen years later, Kirsten is an actress with the Traveling Symphony. Together, this small troupe moves between the settlements of an altered world, performing Shakespeare and music for scattered communities of survivors. Written on their caravan, and tattooed on Kirsten’s arm is a line from Star Trek: “Because survival is insufficient.” But when they arrive in St. Deborah by the Water, they encounter a violent prophet who digs graves for anyone who dares to leave.

Spanning decades, moving back and forth in time, and vividly depicting life before and after the pandemic, this suspenseful, elegiac novel is rife with beauty. As Arthur falls in and out of love, as Jeevan watches the newscasters say their final good-byes, and as Kirsten finds herself caught in the crosshairs of the prophet, we see the strange twists of fate that connect them all. A novel of art, memory, and ambition, Station Eleven tells a story about the relationships that sustain us, the ephemeral nature of fame, and the beauty of the world as we know it.

If you enjoy post-apocalyptic stories that focus more on continuing a life that celebrates what is best in us despite conditions that travel well past hell in the handbasket, Station Eleven is utterly marvelous.

If you prefer the violent aspects of surviving in a world gone mad, try Dies the Fire by S.M. Stirling instead.

The apocalyptic event that creates the world of Station Eleven feels all too real, all too plausible. In 1918, the influenza pandemic killed 3-5% of the world population. The event was slightly less than a century ago, and some of the same factors apply in Station Eleven, especially the ones where governments underestimated the infection rate and communicability of the disease. Or simply chose not to communicate the communicability of the disease.

Another frame of reference is the Black Death in the 1300s. 30-60% of the population of Europe was killed, and it took 150 years for the continent to recover. The combination of these two real-life historical examples bear strange fruit in Station Eleven.

More than 90% of the world’s population is wiped out in less than a month by a particularly virulent strain of swine flu. The disease strikes so quickly and in such large numbers that the world healthcare system is overwhelmed instantly. And it also gains a foothold because the country of origin downplays the seriousness of the epidemic. It spreads before anyone has a chance to find a cure, and then everyone who is either not resistant or not isolated dies in days.

Station Eleven is about how the world tries to right itself, and how much we take for granted that can be gone in an instant. With 90% of the world’s population dead, there is no one to maintain all the hallmarks of civilization that we use without a thought. No electricity, no grocery stores, no internet, no police or fire services. No national government because there is no communication infrastructure.

But it isn’t back to the Stone Age, because all the adults remember the world before. Even in a fight for bare survival, people remember how things used to be. As time goes on, the people who remember are the ones who have the most difficult time adjusting, because now they know just how marvelous the world was, and they mourn for it, or want it back.

The story begins with an event that feels like the death of patient zero, even though it isn’t. But Arthur Leander’s death on stage in King Lear occurs just as the first cases are dying in New York. For the group of people who witness his last performance, it becomes their touchstone for the day the universe changed.

Everything from that point forward is reckoned in B.D. (before disaster) or A.D. (after disaster). No other time frame matters.

“Because survival is insufficient” is a quote from the Star Trek Voyager episode Survival Instinct. It is also painted on the canvas of the Traveling Symphony, a group of actors and musicians who travel around the Great Lakes performing classic works of music and Shakespeare in the small villages and hamlets that have survived the epidemic.

Kirsten Raimonde is one of the actors in the Traveling Symphony. She was also a child actress on stage when Arthur Leander fell, and she is one of the links between the pre-apocalyptic past and the dystopian present.

She and her traveling company tour a circuit of towns around the Great Lakes that, through trial and deadly error, they have determined to be a safe route. That route is disrupted when they return to St. Deborah by the Water to discover that it has been taken over by a cult leader who symbolically, or realistically, buries anyone who does not go along with his beliefs.

He is also the only other person in the changed world to have read an extremely limited run graphic novel that Arthur Leander gave to Kirsten just before the world ended. While Kirsten tries to resolve that puzzle, she and her friends also must journey to a Museum of life before the fall in order to find missing members of their crew who may be dead, or may just have fled the cult.

The cult, the symphony, and everyone’s memories of the late Arthur Leander travel back and forth through time and across a desolate Midwestern landscape to reach one isolated place that ties them all back together again.

Escape Rating A: Station Eleven is all about the journey. Both the literal journey that Kirsten and company take to find their missing crew, and the journey that humanity is taking from our world of overabundance to their world of scarcity. It is a journey that reveals the preciousness of human connection over all the technological distractions of contemporary life.

Using Arthur Leander’s coincidental death provides a mechanism for viewing the world as it was before, and the world as it is after. We see his life move from purpose to pointlessness to death. We also see the destruction through the eyes of the people who surrounded him in those last moments – his best friend, his child co-star, and the paramedic who tried to save him. Each of them takes a completely different journey to that point 15 years A.D. where they all meet again, along with his ex-wife and her son.

They each survive in different but quite possible ways. All equally traumatic and life changing as the universe changes. There is a world after, but the journey to get their is fraught with pain, and sorrow, and occasional sparks of joy.

Station Eleven has been lauded as literary fiction, but the story it tells is firmly within the post-apocalyptic genre of speculative/science fiction. Because it is set 15 years later, we get to see the story of how people survived, and not just the violence of the immediate collapse. It makes this a hopeful and sometimes lyrical tale, one well worth reading.

Because survival alone IS insufficient. To make us human, we must find ways to do and be more. And that is the story of Station Eleven.

p.s. Get your flu shot. It may not help but it can’t hurt.