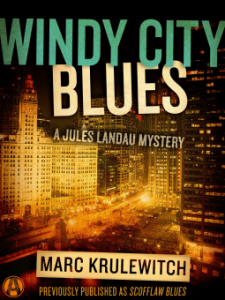 Jules Landau feels right at home in the ethnic stew of the Windy City, where he’s indebted to the hopes and schemes of his criminal ancestors. Street-smart and college-educated, Jules wants nothing more than to go straight and atone for his family’s past. But when he investigates a horrific killing, Jules uncovers a hidden world of lucrative corruption.

Jack Gelashvili had his head bashed in and no one knows why. The most obvious answer is that he was a parking cop, a universally loathed job—especially in Chicago. Turns out there’s a lot of money to be made on expired meters, and when Jules starts making noise, he starts making enemies—from the head of a media empire to the mastermind of a prostitution ring. When rumors of bloodthirsty Mob connections arise, Jack’s gorgeous cousin Tamar objects, and Jules is increasingly swayed by the logic and charms of the sexy baker. Following this beautiful woman into the cloistered world of Georgian immigrants, Jules brings his hunches, his family connections, and his gun. But he’s just one man against a pack of criminals with a million reasons to shoot first. 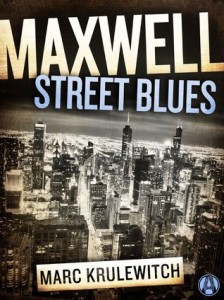 In my review of the first book in this series, Maxwell Street Blues, I said that the Chicago the author portrays feels right to me. I lived and worked in Chicago for a lot of years, and the place in the books feels like the place I knew.

That’s even more true in Windy City Blues. The murder that kicks off this story takes place four blocks west of where I used to live. It is stranger than you can imagine to find your old neighborhood starring in a murder investigation.

And what a murder investigation it is.

The dead body belongs to a parking enforcement officer. That’s a fancy term for what we used to call “meter maids”. Jack Gelashvili’s head was beaten to a pulp, and it killed him. The question that Jules Landau ends up asking starts out as “Why did the managing editor of the Republic (read that as Chicago Tribune) call the city desk to quash the human interest story?” The death of a meter reader shouldn’t have crossed the head honcho’s radar. Not that the city editor didn’t obey his boss’ whim, but that the whim sticks out way more than the crime itself.

And suddenly Jules has a case, looking into Jack’s murder. Of course, Jules discovers that nothing involved is anywhere near the way it seems, starting with the two dirty cops in their last days before retirement, assigned to pretend to stake out the most likely murder suspect. Who can’t possibly be a real suspect, but can certainly serve as a real scapegoat, especially if he dies too.

Jules, as always in Chicago, follows the money. Which weaves a very tangled thread between the City’s Department of Revenue and kickbacks from the private company who leases certain city territories for very lucrative parking meter enforcement.

In Chicago, one hand always seems to wash the other. But when Jules looks into the background of that first unfortunate dead victim, the trail leads to the internecine warfare between the Russian and Georgian immigrant communities. In Chicago, police corruption and political kickbacks are expected. Human trafficking is a whole other shipload of wrong.

A wrong that has claimed more victims than Jules can ever find – and may claim his life and the lives of everyone he is involved with to protect the dirtiest of dirty secrets.

Escape Rating B+: This is definitely the Chicago I lived in. And it makes the story even more fun to recognize sights and suss out which Chicago institution’s names have been changed to protect the innocent, or more likely the guilty.

The major newspaper that is described in this book may be called The Chicago Republic, but based on the description of its policies. its relationship to the other daily in town, and especially to its iconic North Loop offices, its the Chicago Tribune.

The mystery in this story is one that is definitely helped by its Chicago context. The Chicago of popular imagination is a place where city officials taking kickbacks from contractors doesn’t even cause a momentary eyebrow raise on the part of the general public. In Chicago, its expected.

And yes, Chicago has privatized some of its parking enforcement. Probably not exactly the way it is in the story, or we all certainly hope not, but the parking has been privatized and the deal made was definitely questioned. Not necessarily because of outright graft, although that’s certainly possible, but because it looked like either a sweetheart deal or a desperation move that probably would cost the city more than it earned.

So to make the crime something that people in Chicago would actually kill for, the author had to up the ante. Way, way up. The scary thing is that even as heinous as the crime turns out to be, it still seems all too plausible. That one man’s dogged determination would be able to uncover everything, maybe not so much, but the crime, unfortunately, yes.

The readability of this story hinges on its main character, Jules Landau. We’re following him, so he has to be likeable, and be someone we could imagine talking with. Jules is an interesting set of contradictions, in ways that also seem endemic to Chicago. He was brought up in an affluent North Shore suburb, but his great-grandfather was a crony of Capone’s, and his dad did time for bribery and other typical white-collar Chicago crimes.

Jules knows cops because he’s worked with them as a private investigator, and because some of them were responsible for his dad’s arrest. The love/hate relationship he has with his cop friend/informant is sad, funny and useful, all at the same time.

Jules also has a marvelous cat named Punim. Jules may be a vegan, but Punim gets the best bits of animal innards from a local butcher. Punim rules that apartment, but also keeps Jules from being totally alone. Jules’ loneliness, or at least “Lone Ranger-ness”, is also a theme of the stories. In Windy City Blues, he suffers a loss in his inner circle that is expected but still very touching, and leaves readers wondering who will fill that gap in his life and his investigations.

This tour includes a giveaway for a $25 gift card to the eBook Retailer of the winner’s choice + a copy of Maxwell Street Blues, the first book in the series! The giveaway runs until midnight of the last day of the tour, which in this case is January 28th. Enter below.