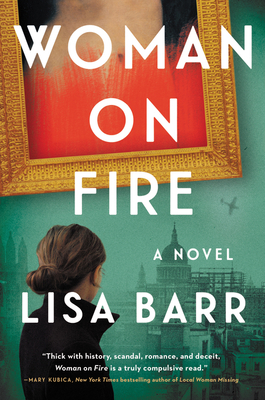 From the author of the award-winning Fugitive Colors and The Unbreakables, a gripping tale of a young, ambitious journalist embroiled in an international art art scandal centered around a Nazi-looted masterpiece--forcing the ultimate showdown between passion and possession, lovers and liars, history and truth. NOW A NEW YORK TIMES BESTSELLER! Actress Sharon Stone set to produce and star in the film adaptation of WOMAN ON FIRE.
After talking her way into a job with Dan Mansfield, the leading investigative reporter in Chicago, rising young journalist Jules Roth is given an unusual--and very secret--assignment. Dan needs her to locate a painting stolen by the Nazis more than 75 years earlier: legendary Expressionist artist Ernst Engel's most famous work, Woman on Fire. World-renowned shoe designer Ellis Baum wants this portrait of a beautiful, mysterious woman for deeply personal reasons, and has enlisted Dan's help to find it. But Jules doesn't have much time; the famous designer is dying.
Meanwhile, in Europe, provocative and powerful Margaux de Laurent also searches for the painting. Heir to her art collector family's millions, Margaux is a cunning gallerist who gets everything she wants. The only thing standing in her way is Jules. Yet the passionate and determined Jules has unexpected resources of her own, including Adam Baum, Ellis's grandson. A recovering addict and brilliant artist in his own right, Adam was once in Margaux's clutches. He knows how ruthless she is, and he'll do anything to help Jules locate the painting before Margaux gets to it first.
A thrilling tale of secrets, love, and sacrifice that illuminates the destructive cruelty of war and greed and the triumphant power of beauty and love, Woman on Fire tells the story of a remarkable woman and an exquisite work of art that burns bright, moving through hands, hearts, and history.

Every single woman in this story is surrounded by flame, from Anika Baum, the model for the iconic painting, to Jules Roth, the woman charged with tracking her down and bringing her home. While along the way, Margaux de Laurent is determined to possess the painting at any and all costs, no matter how many people she has to burn along the way.

If the women are fire, the men are ash – the ash left in the wake of those flames. Ellis Baum, Anika’s son, still haunted by his mother’s death; Dan Mansfield, determined to do his old friend one final favor, and Adam Chase, Ellis’ grandson, an artist burned in the web between Margaux and Jules.

Like all the best heist and caper stories – because that’s a big part of what Woman on Fire is, after all – this story starts at what seems like the end. An end where it looks like everything has gone totally pear-shaped.

And then we rewind back to the beginning. The beginning of the caper, at least. It takes a bit of recap to learn how the players of this high stakes game ended up in the positions they were in before we are able to understand why we need to go all the way back to Nazi Germany and the creation of this avant-garde masterpiece, Woman on Fire.

Ellis Baum, the premier shoe designer in the world, is dying. Before he dies, he wants to see his mother one last time. A task that should be impossible and might still be. But Baum has nothing left to lose. His last sight of his mother was of the Nazis humiliating her and then taking her away. Her crimes were falling in love with a Jewish man and bearing his child and serving as a model for the avant-garde painter Ernst Engel. Both crimes were punishable by death.

Somehow, among all the art the Nazis looted, the painting that she posed for, Woman on Fire, survived the decades. Ellis asks his friend, newspaper editor and investigative reporter Dan Mansfield, to help him get it back.

Margaux de Laurent has an equally personal desire to possess the painting. It was one of her beloved grandfather’s favorite paintings. Gallery owner Charles de Laurent owned the painting briefly in the early years of the war, before the Nazis confiscated it from him. Margaux wants it back in his memory, with the hope of finding enough other looted art to save her family’s art gallery from bankruptcy.

Margaux and Ellis may have equally personal motives for acquiring the painting, but Margaux is considerably more ruthless and considerably less ethical. While both bring all the resources that they and their associates can muster to the task of bringing the painting out of the shadows, Margaux doesn’t care who she has to ruin or kill to get what she believes is rightfully hers.

Escape Rating A: This is a story that started twisting me up from the very first page. I wanted so badly for them to succeed, even with just a few pages of getting into the action. And it was such a horrible let-down of a cliffie when it almost instantly looked like they failed. I knew that couldn’t be the end, but I was pretty desperate to figure out how they got there and how they got out.

Not that all of them do – but more than enough to make this a VERY satisfying read with just the right touch of bittersweet melancholy and righteous resolution.

I also have to admit that although the painting and the artist are not historical figures, I was so riveted and involved in the story that I had to look them up to be certain. It’s that good and it felt that real.

Going into this, I was expecting the early history about the Nazis systematic looting of the great art museums and private collections of Europe, but that initial theft – and theft – and re-theft was horrible and sad but not exactly unknown. What kept me turning pages were the twin searches for the painting, the painstaking research to find its trail from Ernst Engel’s studio through the de Laurent Gallery to its final resting place – and the manipulation and espionage of both parties to find the painting first and freeze out the other side. Each thinks they’re cheating the other and both are determined to win. Each thinks they know the truth about the other, but neither truly does.

And that race to a finish that they each see completely differently is what keeps the reader – or at least kept this reader – frantically turning pages to the very satisfying end.

One thought on “Review: Woman on Fire by Lisa Barr”