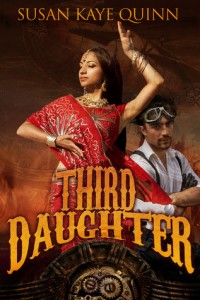 The Third Daughter of the Queen wants her birthday to arrive so she’ll be free to marry for love, but rumors of a new flying weapon may force her to accept a barbarian prince’s proposal for a peace-brokering marriage. Desperate to marry the charming courtesan she loves, Aniri agrees to the prince’s proposal as a subterfuge in order to spy on him, find the weapon, and hopefully avoid both war and an arranged marriage to a man she does not love.

Third Daughter is the first book in the The Dharian Affairs Trilogy (Third Daughter, Second Daughter, First Daughter). This steampunk-goes-to-Bollywood (Bollypunk!) romance that takes place in an east-Indian-flavored alternate world filled with skyships, saber duels, and lots of royal intrigue. And, of course, kissing.

Third Daughter is a first-rate fantasy. Especially if you like your fantasy mixed with a little steampunk and a lot of political machinations. It’s also the coming-of-age story about a fascinating heroine who goes from spoiled princess to smart operator through a trial by literal fire.

This fantasy is set in a land based on Indian-influenced customs and legends. Not Native American, but the Indian subcontinent. According to the author, Third Daughter is steampunk and fantasy with a lot of Bollywood.

However you describe the setting, it is refreshing to read a fantasy that uses something other than Celtic mythology and Medieval Europe as its starting point.

The story is the tale of the Third Daughter of the Queen of Dharia. Aniri has grown up in the mistaken belief that her mother does not have a political purpose planned for her, and that she will be able to marry for love the moment she turns 18.

Of course, it is not to be. And a good thing, too.

Aniri has fixed her heart on a courtesan attached to the household of the Samirian Ambassador. She believes that the Samirians are allies, and that Devesh really loves her and wants to help her. Aniri is politically naive, and doesn’t understand that courtesans are also spies.

But the Prince of Jungali arrives just before her 18th birthday, and promises her kingdom a peace treaty in return for marriage to the only unmarried daughter of Dharia. Meaning Aniri. Her mother wants peace with Jungali because the mountain country is rumored to be developing a skyship, a weapon that will change the balance of power between Dharia (currently on top) and Jungali.

Aniri reluctantly does her duty and accepts the engagement, but only after her mother lets her in on the real plot. Aniri is supposed to spy on her new country, and discover whether the skyship is real, or merely rumor. Once her mission is done, she will be free to return to her lover.

But the world is not as Aniri imagines it. Not just because it feels wrong to spy on the man she is supposed to marry, but because the Prince is much more than the barbarian she has been taught that all Jungali are.

Prince Ashoka wants peace. He wants to unite his people, and get rid of the warmongers who have been fomenting trouble between Jungali and Dharia with the help of the Samirians. But the young and handsome Ash also wants Aniri as his Queen. Not just for peace, but for real.

He’ll just have to navigate the plots and counterplots in his own court, and find the way to Aniri’s heart. But first, the would-be princess spy and the barbarian prince will have to cut their way through the secrets and lies that would keep them apart. And survive the assassins.

Escape Rating A-: Third Daughter is terrific fun! The setting feels fresh and new, in a way that makes you dive right into the story as you learn how the world is set up. It feels a bit like a fantasy version of India under the Raj, except that there are no British overlords. Each country is ruled by a Queen rather than the traditional male hierarchy.

Even Prince Ashoka of Jungali can’t unite his country until he finds a Queen who will rule. In Dharia, it is the First Daughter who will become Queen after her mother.

Aniri’s adventures are her coming-of-age story. She starts out rather spoiled, believing that the rules don’t apply to her. She also hasn’t bothered to learn about the conditions of the world around her, or the issues that make government such a burden for her mother.

Being sent to Jungali is the making of her. Aniri has a great adventure, but what makes her interesting to follow is that she learns from her mistakes, and does she ever make a lot of them! She wants to do the right thing, but starts out believing it is going to be much easier than it is.

She also discovers that a lot of people have been lying to her. Learning truths for herself is part of growing up. Aniri changes from willful child to self-sacrificing adult as she navigates her new and unknown country.

Ash is a great foil for Aniri, and also a swoon-worthy romantic hero. He will do anything for his country in order to bring peace. He thinks he’s sacrificing himself when he goes to Dhaira to bring home a bride, but he falls for Aniri and thinks its going to be unrequited. But he continues because he knows it’s best for his country.

It takes Aniri a long time to see the treasure that is in front of her, and to accept the life before her. Working with Ash, traveling with him and seeing his country through his eyes, opens hers. 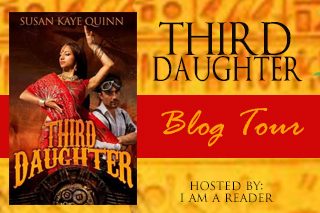 Susan is generously giving away a $25 Amazon or Paypal Gift Card to one lucky commenter on the tour. For more chances to win, follow the rest of Susan’s tour! The schedule is here at I Am A Reader. To enter, just fill out the Rafflecopter below:
a Rafflecopter giveaway