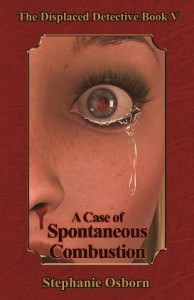 When an entire village on the Salisbury Plain is wiped out in an apparent case of mass spontaneous combustion, Her Majesty’s Secret Service contacts The Holmes Agency to investigate. Unfortunately Sherlock Holmes and his wife, Dr. Skye Chadwick-Holmes, have just had their first serious fight, over her abilities and attitudes as an investigator. To make matters worse, he is summoned to England in the middle of the night, and she is not — and due to the invocation of the National Security Act in the summons, he cannot even wake her and tell her.

Once in London, Holmes looks into the horror that is now Stonegrange. His investigations take him into a dangerous undercover assignment in search of a possible terror ring, though he cannot determine how a human agency could have caused the disaster. There, he works hard to pass as a recent immigrant and manual laborer from a certain rogue Mideastern nation as he attempts to uncover signs of the terrorists.

Meanwhile, alone in Colorado, Skye battles raging wildfires and tames a wild mustang stallion, all while believing her husband has abandoned her.

Who — or what — caused the horror in Stonegrange? Will Holmes find his way safely through the metaphorical minefield that is modern Middle Eastern politics? Will Skye subdue Smoky before she is seriously hurt? Will this predicament seriously damage — even destroy — the couple’s relationship? And can Holmes stop the terrorists before they unleash their outré weapon again?

Mass human spontaneous combustion–it sounds like something that would be reported in the tabloids at the grocery checkout stands. And that is what happens in A Case of Spontaneous Combustion. But unlike the usual tabloid stories, this one is true, and MI-5 calls in Sherlock Holmes to investigate.

If it sounds like I’ve sailed even further into tabloid-land, I haven’t. This story is the fifth book in Stephanie Osborn’s Displaced Detective series, where Sherlock Holmes has been brought to our world through quantum physics. (Read The Case of the Displaced Detective: the Arrival (reviewed here) for details.)

The difference is that the Sherlock Holmes in this particular pastiche is a real person, not a fictional construct as he was in our version of the multiverse. And being human and not literary, he does not completely resemble the literary version in Conan Doyle’s stories. Because this one managed to fall in love, and get married. Eventually, and with a lot of persuasion and adaptation from the 19th century to the 21st. (See The Case of the Displaced Detective: At Speed (review) and The Case of the Cosmological Killer (review) for the full story.)

A Case of Spontaneous Combustion is a story designed to showcase both sides of the Holmes that came to our world. On the one hand, he has a diabolical mystery to investigate, and on the other, he’s in the middle of a fight with his wife, and it’s affecting the case. It also becomes a minor case in its own right.

Holmes and his wife Skye have their first major argument. And it’s the kind of thing that looms large at the time, but could be quickly gotten over in the morning, when both tempers have cooled off a bit. Instead, Holmes gets hauled off to England, and his orders specifically exclude Skye and invoke the Official Secrets Act. He’s stuck and screwed (or not, as the case may be)

He gets to London, and almost immediately goes undercover to look for the terrorists who set off something in the middle of a small town that exploded all the inhabitants, and every other living thing for a radius of two miles, without harming any of the buildings.

Skye can’t reach him, and it’s literally more than his life is worth to call her. They both write letters trying to patch things up, but neither set of letters is getting through. Each thinks that they have been abandoned by the other, and that their marriage is over. They both descend into a certain amount of self-destructive behavior, while Holmes is undercover among the terrorists.

Things look like they are not going to end well. The case turns out to be much bigger, and considerably more dangerous, than was originally believed. By the end, Holmes and Skye’s bodies may be among the dead, if someone doesn’t solve their missing communications first.

Is it all part of the terrorist plot, or is there a spy in MI-5? Holmes needs Skye to save him from himself, and to figure out the high-level physics behind the mass spontaneous combustion.

Escape Rating B: I love this series. The whole concept of an alternate-world Sherlock Holmes works for me. He’s Holmes, but he’s not quite Conan Doyle’s Holmes, and that provides enough leeway for the ways that he’s different. In fact, a point in this story is that people keep equating the living Holmes with the fictional creation, and make assumptions that prove very, very wrong or hurtful, sometimes both.

There are two stories here; the marital tension being exacerbated by the missing communication, and the terrorist plot. I’ll admit that there were points where I wondered if they might somehow be part of the same plot, but there were different “baddies” for each one.

One issue with basing a series on whether or not a romantic relationship forms between the main characters is that a significant part of the dramatic tension can dissipate when the sexual tension is consummated. The depths to which both Holmes and Skye sunk as a result of their argument took over too much of the story. And it felt like a misunderstandammit that should have been resolved much more easily. The reasons behind the plot to keep them from communicating were a bit simplistic and it was easy to spot the perpetrator.

The terrorist case was much more nefarious, and it took longer to develop and to bring to a (temporary) close. Watching Holmes work his undercover magic in a contemporary setting was marvelous. Changing his identity and immersing himself completely in his role is a skill that translated well from one century to the next. But I think the ringleaders of this one will be back, and I’m looking forward to it.

5 thoughts on “Review: A Case of Spontaneous Combustion by Stephanie Osborn”