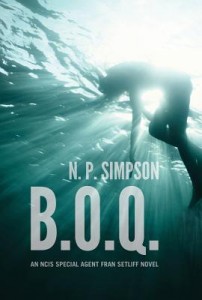 People like Ann Buckhalter, the wife of a retired Marine lieutenant colonel, often stay at the Bachelor Officers’ Quarter (B.O.Q.) when they return to Camp Lejeune to visit friends or shop at the Exchange. But their dead bodies don’t end up floating in the nearby New River.

When Special Agent Fran Setliff and her Naval Criminal Investigative Service (NCIS) team investigate Ann’s murder, they soon discover that more than one person’s life has been simplified by the victim’s death.

As Fran delves into Ann’s background, she begins to glimpse the unsavory things that go on behind the camouflage curtain—racial and gender discrimination, unethical medical practices, sexual indiscretions. As a freelance journalist for the local civilian newspaper, Ann was in a position to ruin more than one promising military career. But who killed her?

In addition to the strong female character of Special Agent Setliff, the book is filled with interplay among various colorful individuals in the military ranks. Readers also gain insight into the strict hierarchy set up for military men and women and their spouses and children. Besides providing a behind-the-scenes look at the inner workings of a military base, B.O.Q. is a compelling detective story with an ending readers won’t see coming.

The title is just a bit of a tease. Yes, I picked it up because it says its about an NCIS agent. While I knew perfectly well that it couldn’t represent any of the characters from the popular TV show (which I love) I was hoping for some of that same feel, even with a different set of characters.

What I got instead of was a good murder/mystery that involves military personnel and the closed culture that is created between a military base and the nearby town that is economically intertwined with it.

In other words, a case where everyone knows absolutely everyone, and everyone either owes everyone or hopes to get later favors from everyone. When there’s a “death in the family” under suspicious circumstances, the police come in as invaders to determine what went very, very wrong.

When the victim is part of the Navy or Marine “families”, or when the murder takes place on a Naval Base like Camp Lejeune, the special agents of the Naval Criminal Investigative Service, in other words, NCIS are the cops that come to investigate the crime.

Fran Setliff is the special agent in charge of this particular case. And it is a humdinger. The wife of a retired Marine Lieutenant Colonel dies under very mysterious circumstances while she’s staying in the Bachelor Officers’ Quarters (B.O.Q.) at Camp Lejeune outside Jacksonville North Carolina.

The death looks like a bad case of death by misadventure, except for some very weird things. Ann Buckhalter drowned in a relatively shallow river. Somebody hit her on the head either before or after she died, or possibly both. And she’s a newspaper reporter.

Even as Agent Setliff unravels the layers upon layers of secrets that surround Ann Buckhalter’s life, the mystery about her death seems to just get deeper. The number of people who might have wanted her dead increases at every turn, but no one that comes to attention of the investigators actually seems to be the one who done it.

And Fran isn’t sure whether the Navy lawyer who is supposed to be aiding the investigation isn’t really there to keep the Base Commander out of political, or possibly homicidal, hot water. Or if that lawyer’s romantic pursuit of her is real or just another way of keeping the case (and the agent) muddled.

The mystery entangles everyone on the base, and as it unwinds, nearly everyone is a suspect. By the time the answer is revealed, secrets and careers are as dead as the victim. But the conclusion absolutely will keep you guessing until the very end.

Escape Rating B+: Don’t let the NCIS label fool you, B.O.Q. is a solidly good police procedural-type mystery in a military setting with a corkscrew of a case to solve. Evaluate it on its own merits.

Fran Setliff is an empathetic point of view character. She’s not part of the military (neither are most NCIS agents) but she is an intelligent and well-trained police officer. She has a case to follow, and she goes where the evidence leads her.

Sometimes, being the only female NCIS special agent in her area is an advantage, but mostly, it’s a pain in the ass. Which seems completely logical. She’s enmeshed in the problem of needing to be twice as good in order to be thought equal with the male agents, and she has a difficult time letting herself relax or quit thinking about (and living) her job.

The complications of this particular case are compounded, because the Base Commander is being sued for sexism in hiring and promotions, and there seems to be proof to back up the claims. Those allegations make him just one of the many possible murder suspects. People who are willing to cover up for him only add to that list.

Solving the case isn’t helped by the ways in which the victim played her military connections against her journalism career, and revealed secrets from both sides as it suited her purposes.

In the end, it feels as if there are no truly “good guys” in this case, just a lot of grey areas. But that’s what kept me guessing until the very end. I hope that I get to see Agent Setliff investigate more cases.