On a remote, icy planet, the soldier known as Breq is drawing closer to completing her quest.

Breq is both more than she seems and less than she was. Years ago, she was the Justice of Toren–a colossal starship with an artificial intelligence linking thousands of corpse soldiers in the service of the Radch, the empire that conquered the galaxy.

An act of treachery has ripped it all away, leaving her with only one fragile human body. And only one purpose–to revenge herself on Anaander Mianaai, many-bodied, near-immortal Lord of the Radch.

Part of the fascination with Ancillary Justice is the hidden nature (or natures) of the first-person protagonist.

As the story progresses, we see how Breq got to be who and where she is, and why. But it’s all told from her multiple first-person perspectives, and the past flows into the present.

Time is not the only thing that’s fluid. We don’t discover whether Breq is male or female until the end. And it doesn’t really matter to the story, except that it’s unknown. Breq doesn’t seem to care, and it doesn’t affect how people treat her. She’s too busy worrying about whether or not she is faking being human well enough to give a thought to her gender or lack thereof.

Breq used to be a ship. She also used to be a person. She considers herself the last remaining ancillary of the ship Justice of Toren, and not an individual. Or a citizen. Or a lot of other things.

The fascinating thing about Breq is that the whole rationale behind her journey proves that she is an individual after all. She, and she alone, makes changes in the universe, because she is on a question to avenge a friend.

She just needs to take down an immortal emperor to do so.

The story feels like Breq’s quest for personhood. Somewhat the way that Data always wanted to be more human. The difference is that Breq used to be human, over 2,000 years ago, before she became an ancillary. She doesn’t seem to care who she was before, and she misses having all the other parts of herself that she had when she was Justice of Toren.

She’s on a quest, and that’s the only thing that matters to her. Also saving the galaxy, or at least the imperium.

The story gets bigger and bigger as it goes, even as Breq’s perspective narrows from the all-seeing ship to the one-seeing Breq. The irony is that as Breq comes to accept and even rely on her single-point of view, the multi-bodied emperor is fighting a civil war with herself. Unfortunately, the emperor’s divided mind is housed in multiple bodies, all of which are gathering adherents, and soldiers.

Breq’s quest to get the emperor’s undivided attention is bigger, badder and more convoluted than it seems. But incredibly awesome.

Escape Rating A: Now I understand what all the fuss is about. Ancillary Justice has been nominated for just about every SF award possible this year (it won the Nebula) and it’s definitely justified.

Breq’s story is part of the slow reveal of the plot, the characters, the universe and everything past and present. She always sees herself as an outsider, but she doesn’t always see herself. She’s so used to being one of many that she doesn’t quite accept herself as one of one.

There is a lot of fluidity to the way this story is presented. Not just that Breq doesn’t present herself as gendered, but that she has difficulty determining which gender others belong to. Her own language doesn’t have gendered pronouns, everyone is a citizen, or not. I found that some characters that Breq presents as “she” other characters name as “he”. Breq seems to see everyone as like herself, or thinks that female is the dominant gender, or just can’t see how it matters except as yet another way to make a mistake in address or behavior.

I will also say that reading this book gave me a terrible book hangover. The story wasn’t done, I wasn’t done, and I just couldn’t make myself leave. I ended up finally reading Fortune’s Pawn by Rachel Bach, because I wanted to stay in an SF-nal universe, even if I couldn’t go back to Imperial Radch just yet. 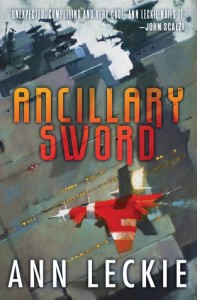 But I will. The next book in the trilogy, Ancillary Sword, is due this October.