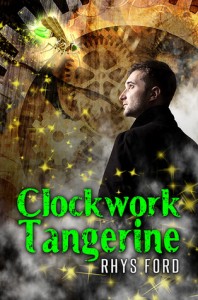 The British Empire reigns supreme, and its young Queen Victoria has expanded her realm to St. Francisco, a bustling city of English lords and Chinese ghettos. St. Francisco is a jewel in the Empire’s crown and as deeply embroiled in the conflict between the Arcane and Science as its sister city, London—a very dark and dangerous battle.

Marcus Stenhill, Viscount of Westwood, stumbles upon that darkness when he encounters a pack of young bloods beating a man senseless. Westwood’s duty and honor demand he save the man, but he’s taken aback to discover the man is Robin Harris, a handsome young inventor indirectly responsible for the death of Marcus’s father.

Living in the shadows following a failed coup, Robin devotes his life to easing others’ pain, even though his creations are considered mechanical abominations of magicks and science. Branded a deviant and a murderer, Robin expects the viscount to run as far as he can—and is amazed when Marcus reaches for him instead.

I was hoping that Rhys Ford had another Hellsinger book out. Even though I was disappointed in that search (until this Fall when every anticipated book in the universe will be released) I found this little steampunk gem, and decided to give it a try. I love Ford’s urban fantasy Black Dog Blues (want more) so the steampunk alternative seemed like a good idea.

The story takes place in an alternate Victorian era where Charles Babbage seems to have been part of a deranged organization that tried to change the structure of society by using golems and machina to wipe out the upper-crust. While it didn’t work, it left a hell of a mess, and everyone is still recovering decades later.

It also seems that the U.S. Revolution must not have succeeded, because the city of St. Francisco is still very much a part of the British Empire.

St. Francisco is a place where peers of the British realm govern a city of Chinese laborers and colonial upstarts. Being in the midst of the Victorian era, the world is all decorum on the one side, but those with money and connections pay for corruption in the shadows that they decry in the light.

Due to the failed coup, the laws against the use of the Arcane, especially when mixed with mechanical powers, are draconian and downright detrimental.

Into this mix the author throws two men, Marcus, Viscount Stenhill, and Robin Harris. Two men who should never have met. Marcus is a scion of the upper crust, and Robin is not merely an Arcane practitioner, but was the genius scapegoat behind the inventions used by the plotters.

While this is a society that considers sex between two men a perversion (the Victorians seem to have considered sex between two humans unspeakable), that Robin and Marcus fall in love is just part of the story. It’s the why of it that’s interesting.

Robin is still trying to save people, using a forbidden mixture of science and the arcane. He’s trying to continue to be a doctor, in spite of having his credentials stripped. Marcus wants to see the injustices done to Robin reversed, and his method of saving Robin is to take him under his sponsorship.

Money can reverse some of the damage that has been done. Love can take care of the rest.

Escape Rating B: The love story between Marcus and Robin was actually kind of sweet. Due to all the societal restrictions, it takes them quite a while to move their friendship to a deeper level.

But the worldbuilding is absolutely terrific. The mixture of Victorian surface prudishness combined with the hidden world of deniable sexual sadism felt all too possible, similar to the way that the Victorians vilified prostitutes while patronizing them. It was done, it just wasn’t talked about.

That the revolution seems to have been magical rather than industrial takes this world down a different track completely. I wondered why St. Francisco was still British. That’s a heck of a change.

Also, the revolution left behind the equivalent of dirty bombs, in the same way that UXBs are still found in England. That Marcus’ father was one of the last victims, while Robin’s ideas were co-opted to create the damn things, made an interesting juxtaposition.

Clockwork Tangerine is a neat little story, I just wish I could see more of the world in which it takes place.