It is my very, make that my extremely great pleasure to welcome Rhys Ford back to Reading Reality! Today is the Grand Opening for the tour for her latest book, the coming-real-soon-now first book in the McGinnis Investigations series, Back in Black. I’m thrilled to have her here today and so very pleased that Cole McGinnis, his partner (now husband) Kim Jae-Min, and their feline overlord Neko are coming back for more hair-raising adventures that I practically begged to be on the tour. My review of Back in Black will be posted next week, but in the meantime, here’s Rhys with the first part of a teaser short story, a few things to say, and a giveaway!

Take it away, Rhys!

Hello! And thank you for joining the Back in Black Blog Tour! My name is Rhys Ford and I will be your guide through this serialized short story featuring Cole McGinnis and his trip to the altar. Hit each blog stop for the next bit of the story AND as a special bonus, Greg Tremblay has narrated each “slice of cake” on this wedding tour!

As some of you know, Cole McGinnis is a former LAPD detective who found love again in a romance suspense series called the Cole McGinnis Mysteries or as I call it, the Dirty Series. It is there he meets and falls in love with Kim Jae-Min, a Korean photographer with a few secrets of his own and a tiny black cat with an attitude. I left Cole and Jae in quite a happy place five years ago in Los Angeles with a promise to come back and “reboot” Cole’s life in a mystery series.

(You can find the first series here at Dreamspinner Press, including a special free bonus collection of shorts in both ebook and audiobook format) 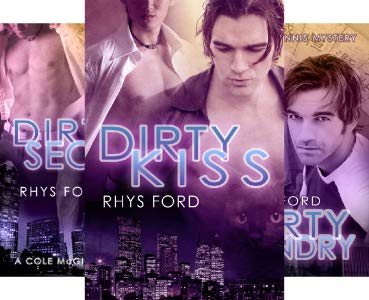 If you’ve already met Cole, well then I am happy to announce he’s back and well, while things are a little bit different… and he’s a hair older… his life is still as insanely jam-packed with action and more than a few mysteries to figure out. All of the old gang is back along with a few new faces and I hope you all enjoy Back in Black as much as I enjoyed writing it.

And as if Cole wasn’t fun enough to write, Greg Tremblay is back as Cole McGinnis in the upcoming audiobook which is supposed to be out on Feb 13th! If you aren’t a part of my Facebook group or follow me on social media, please be sure to find me to learn about any future stuff. Because 2020 is going to be a hell of a lot of fun.

As always, there is a giveaway! Please Please fill out the rafflecopter to enter to win a $25 Gift Certificate to the online store of your choice!

Nothing Else Matters: Part One

“I swear to God, Dawson,” I shouted over the gunfire. “If you get me killed before my own damned wedding, I’m going to come back and haunt you every time you have sex!”

“Since I’m married to your damned brother, pretty sure if I get you killed, I won’t be having sex ever again, asshole!” My best friend yelled back, grabbing at the back of my head to shove me down. “Stay down. They’re coming back around!”

When he wasn’t having sex with Ichi, my younger brother, or beating me up at JoJo’s Boxing Gym, Bobby spent most of his free time lifting weights or coaching young rugby players on how to bulk up and increase their stamina. He practiced what he preached and for someone nearly twenty years older than me, there was power in those muscular arms of his. Okay, even if he were my age or younger, his strength was plenty impressive and that shove to the back of my head? Brought my nose right down into the rough cracked asphalt.

I was never one to worry about my looks but something told me if I showed up at the altar with road rash all over my face, Jae was going to make me wish I had been shot in the middle of Chinatown.

The side of the minivan we’d chosen to take cover behind was taking hard hits, the metal punched through with round after round of whatever it was the two men across the street were shooting. Around us, the sidewalks were nearly empty, having moments ago been sparsely populated by early morning shoppers looking for a bargain among the stalls set up in a side alley.

Our one almost perfect escape route had been cut off by an old woman who’d taken one look out of her store, spotted what was going on and hastily rolled down the steel door, sealing herself in. Or possibly giving herself enough time to skip out of the back entrance and down the alleyway to get a cup of coffee. Either way, Bobby and I weren’t going to be able to cut through her shop and get out of the line of fire.

“Do you even know these guys?” I yelled into the road I lay face down on. The street sweepers hadn’t been by in years. Either that or someone nearby was still stocking orange Sno-bals and blue-papered cigarettes because that’s what was keeping me company against the curb.

“Might have arrested them a few times,” Bobby confessed. “Or maybe double crossed them when I worked undercover. Does it really fucking matter now, Princess?”

Sure, my stint with the LAPD lasted long enough for me to gain a few enemies but Bobby seemed to have gone out of his way to piss people off when he wore a badge. Okay, so he pissed people off long after he retired too but chances are, the two guys in hoodies and floppy pants weren’t ticked off because he sniped their boyfriends at a club. And while those days were long over following his marriage — or at least they should be over — there wasn’t any guy worth killing over.

Okay, maybe Jae but if I didn’t get out of Chinatown in the next hour or so, the angry guys with guns would be the least of my worries.

If you want the rest of the story – and you know you do – follow the TOUR! 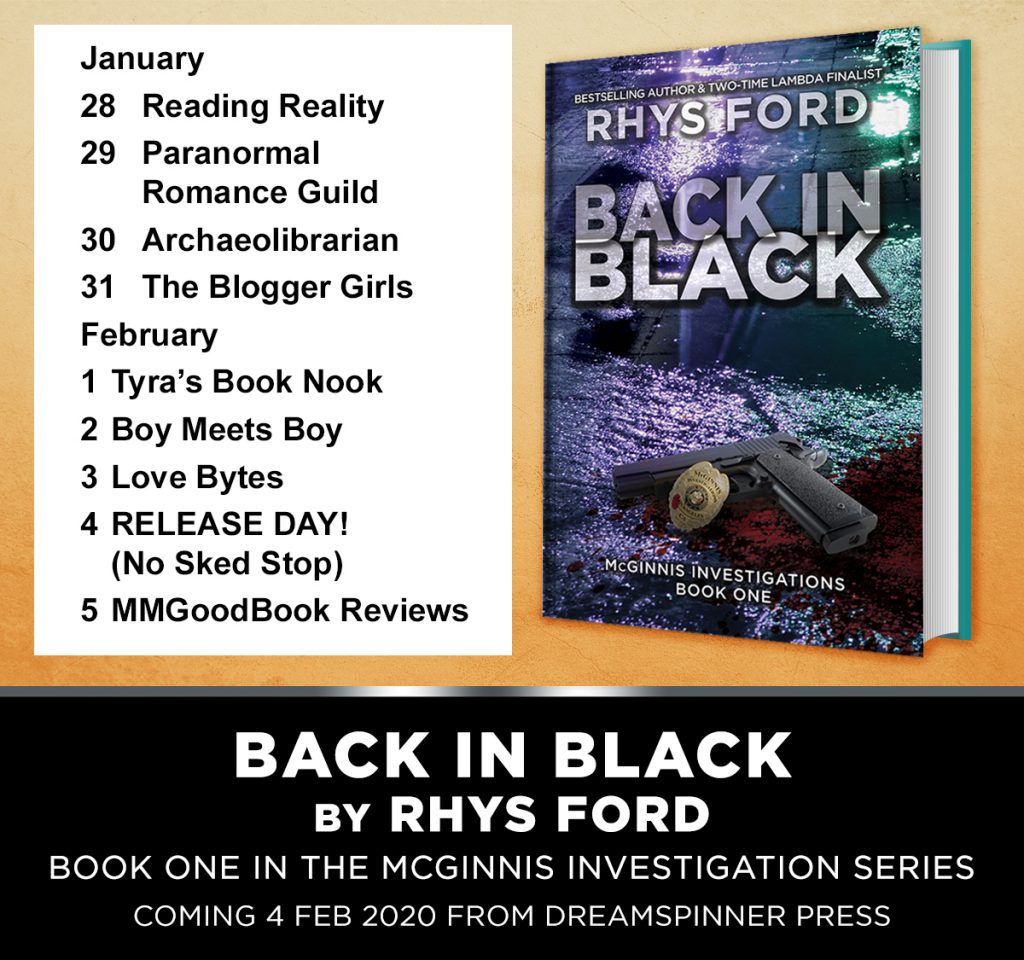 There are eight million stories in the City of Angels but only one man can stumble upon the body of a former client while being chased by a pair of Dobermans and a deranged psycho dressed as a sheep.

That man is Cole McGinnis.

Since his last life-threatening case years ago, McGinnis has married the love of his life, Jae-Min Kim, consulted for the LAPD, and investigated cases as a private detective for hire. Yet nothing could have prepared him for the shocking discovery of a dead, grandmotherly woman at his feet and the cascade of murders that follows, even if he should have been used to it by now.

Now he’s back in the dark world of murder and intrigue where every bullet appears to have his name on it and every answer he digs up seems to only create more questions. Hired by the dead woman’s husband, McGinnis has to figure out who is behind the crime spree. As if the twisted case of a murdered grandmother isn’t complicated enough, Death is knocking on his door, and each time it opens, Death is wearing a new face, leaving McGinnis to wonder who he can actually trust.

Purchase Back in Black at Dreamspinner, Amazon (Globally) and other online book stores:

Back in Black Audiobook can be preordered here: https://www.amazon.com/Back-Black-McGinnis-Investigations-Book-ebook/dp/B07YZLRMPG 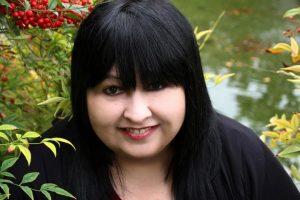 Rhys Ford is an award-winning author with several long-running LGBT+ mystery, thriller, paranormal, and urban fantasy series and is a two-time LAMBDA finalist with her Murder and Mayhem novels. She is also a 2017 Gold and Silver Medal winner in the Florida Authors and Publishers President’s Book Awards for her novels Ink and Shadows and Hanging the Stars. She is published by Dreamspinner Press and DSP Publications.

She’s also quite skeptical about bios without a dash of something personal and really, who doesn’t mention their cats, dog and cars in a bio? She shares the house with Harley, a grey tuxedo with a flower on her face, Badger, a disgruntled alley cat who isn’t sure living inside is a step up the social ladder as well as a ginger cairn terrorist named Gus. Rhys is also enslaved to the upkeep a 1979 Pontiac Firebird and enjoys murdering make-believe people.

Rhys can be found at the following locations:

For more information and to keep track of his upcoming releases, visit Greg Tremblay at: https://gregtremblay.com/

84 thoughts on “Back in Black by Rhys Ford: The Blog Tour”