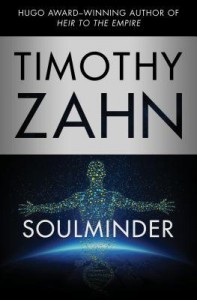 For Dr. Adrian Sommers, a split second of driving while distracted leads to tragedy—and obsession. His family destroyed, he devotes his entire being to developing Soulminder, a technology that might have saved his son as he wavered on the edge of death. Sommers’s vision is to capture a dying person’s life essence and hold it safely in stasis while physicians heal the body from injury or disease. Years of experimentation finally end in success—but those who recognize Soulminder’s possibilities almost immediately corrupt its original concept to pursue dangerous new frontiers: body-swapping, obstruction of justice, extortion, and perhaps even immortality.

Soulminder completely surprised me, and I mean that in a good way. It’s the first thing I’ve read by Timothy Zahn, but I doubt it will be the last.

This one makes you think, one of the goals that science fiction often aspires to but does not always achieve.

What if you could live forever? What if anyone could live forever, if they were rich enough, or lucky enough (or unprincipled enough)? How would society change if signing up for immortality was just an extension of your health insurance?

Soulminder is a story about the road to Hell being paved with excellent intentions. Even humanitarian intentions. But it also shows how, as another saying goes, power corrupts and absolute power corrupts absolutely. (And I realize I’ve probably corrupted the quote, but with good intentions).

Dr. Adrian Sommers spends ten years of his life searching for a way to preserve the human essence, call it life force or soul, while the body is being repaired. He sees it as a way of sparing other parents the anguish he suffered when his little boy died, not because he had a deadly disease, but because he suffered in his injuries in an accident where conditions meant that they couldn’t be reached in time.

If his Soulminder existed, David’s “soul” could have been trapped until his body could be rescued and treated.

The tragedy for Dr. Sommers is that when he finally brings his dream to fruition, it turns into a nightmare. A nightmare that presents him with daily ethical dilemmas and puts him in the direct path of every governmental bureaucracy and intelligence agency on the planet.

His engineer partner doesn’t care about the ethics, she just wants to make money and grab her own slice of immortality.

So Sommers watches as his dream is perverted from a better way to treat accident victims and cancer patients into, among other things, a way of creating mindless slaves and a rent-a-body industry.

Until he finally manages to draw a line in the sand, and make it stick. No matter what the cost. Money and power are, after all, not worth selling his soul.

Escape Rating A-: This is a hard story, because everything goes wrong. Even worse, it all goes wrong in ways that are easy to predict once the snowball starts rolling down the hill. It’s the cycle of action and reaction that kept me enthralled.

I knew things would only go from bad to worse, but it’s the way they go that’s inventive. Immortality as a commodity was, perhaps is, bound to produce some serious inequities, but the ways in which the original device is perverted sometimes beggar the imagination. Until they happen in the narrative, and then the reader thinks, “of course they would”.

And Sommers keeps saying that it can’t go on, or further down the path to hell, and then buries his head in the sand again. He’s a smart man but seldom owns up to the fact that his partner is keeping him distracted on purpose. It’s easier just to let her.

The political infighting, and the moral quagmires, kept this story interesting. Occasionally, it felt like the episodes of various events weren’t completely connected. They felt like snapshots more than a complete narrative, but the overall picture was stark and clear.