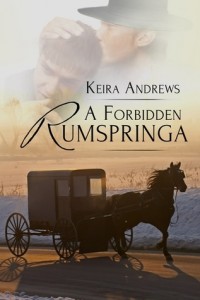 When two young Amish men find love, will they risk losing everything?

In a world where every detail of life–down to the width of a hat brim–is dictated by God and the all-powerful rules of the community, two men dare to imagine a different way. At 18, Isaac Byler knows little outside the strict Amish settlement of Zebulon, Minnesota, where there is no rumspringa for exploration beyond the boundaries of their insular world. Isaac knows he’ll have to officially join the church and find a wife before too long, but he yearns for something else–something he can’t name.

Dark tragedy has left carpenter David Lantz alone to support his mother and sisters, and he can’t put off joining the church any longer. But when he takes on Isaac as an apprentice, their attraction grows amid the sweat and sawdust. David shares his sinful secrets, and he and Isaac struggle to reconcile their shocking desires with their commitment to faith, family and community.

Now that they’ve found each other, are they willing to lose it all?

Note: Contains explicit sexual situations and graphic language. This is not an inspirational/Christian romance.

When two young men fall for each other in an atmosphere as circumscribed as the Amish town of Zebulon, there’s only a few branches on the decision tree if there’s going to be an HEA. So everything rides on the style and the details. Once in a while a chunk of research looks like a chunk of research, but for the most part the details are organic to the story.

Keira Andrews gives us a book that flows, in plain language that fits the community that Isaac and David belong to. This offshoot of a larger group is struggling to make ends meet in a new place, with less interaction with the outside, and tighter rules than ever before. Where these young people had expected to have a time of freedom and tasting the “English” way of life, now, no such chance exists. As for joining the church under these circumstances—it doesn’t feel like a choice. The families that emigrated to found Zebulon all seem to be touched by tragedy brought by the young people experimenting, and therefore, no one shall experiment again: it’s too dangerous.

But the young will test their boundaries, and some cannot fit within the narrow confines.

Finding out the details of why strict went to straightjacket took long enough to make me impatient, because there had to be a reason why an already austere group would do this to themselves and their children. When even an orange safety reflector on the back of the buggy is too worldly, there has to be a reason. It was a while coming.

Not for Isaac and David to question why, though; they’re young, not yet “following church” or slipping into the life path expected of them. Isaac eyes David’s sister with fear—she’d make him a fine, hard-working wife, and if people pushed them together any harder there’d be bruises. Meanwhile, down in the barn, David and Isaac make more than furniture.

The two of them dance around the growing attraction as long as possible, but once they acknowledge the heat between them, they can’t keep their hands off each other. There were a lot of sex scenes which mostly drove the plot, but no sense of fumbling or inexperience, and I really don’t believe one raunchy magazine read by David long ago was enough to make them as adventurous or skilled as they were.

The author put a lot of effort into understanding the culture she writes about, and the respect is clear and unjudgmental. The sense of following the Ordnung, the religious directions, as a way of life is strong, though for David and Isaac, the sense of religion as faith is almost absent. Thinking for one’s self is anathema, and difficult for the young men to do. To do so risks friendship, family, and all ties. Isaac’s older brother Aaron never came back after rumspringa, and the youngest brother doesn’t even know Aaron exists. The pain of such choices weighs heavily on Isaac, who is our only POV character.

Escape Rating B+: The author tackled a tough situation where the characters have few options, writing with skill and dignity. David and Isaac have another book following, where they could solidify as a couple, which should be equally good reading.

In a separate but related note, the ebook is very prettily formatted, with custom chapter headers and horse-and-buggy dingbats.