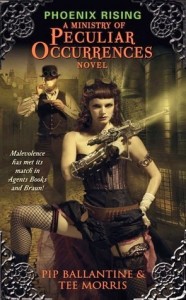 In Victorian England, Londoners wash up dead on Thames, drained of blood and bone. Clandestine Ministry of Peculiar Occurrences is forbidden to investigate. But Eliza Braun, with bulletproof corset, fondness for dynamite, remarkable devices, drags along timorous new partner Wellington Books, of encyclopedic brain, against Phoenix intent on enslaving Britons.

I read this by accident. Lucky for me, it was a good accident. If you’re wondering how to read a book by accident, it’s pretty simple. Just get on an airplane. Even with an ereader, all you’ve got is what you’ve already downloaded. Then hunt for a book by title, and forget to check the author. It also helps to have multiple books with the same title.

It’s turned out to be a happy accident. It reminded me that a very long time ago, I read a book by Tee Morris and Lisa Lee titled Morevi, and utterly loved it. (If you love epic fantasy and can find a copy, it’s very worth it)

This Phoenix Rising takes place in a very steampunk version of London, and centers around two agents of the Ministry of Peculiar Occurrences. The agents are, of course, chalk and cheese, as the British would say. Wellington Books is the Ministry archivist; he spends most of his time in the subbasement, organizing the very dangerous artifacts and sometimes dull case files that are sent down by field agents after they complete their assignments – or by their colleagues if the agent doesn’t come back.

Eliza Braun is a field agent with an insubordinate streak a mile wide. She’s looked down upon both as a female agent and as a representative from the far-flung colonies – she’s proud to be the only Kiwi (New Zealander) in the London office of the Ministry.

Books and Braun are thrown together when she is sent to make sure he doesn’t spill any Ministry secrets while in the torturing hands of the House of Usher. Thinking fast on her feet, or being insubordinate as usual, Eliza rescues Books instead of eliminating him as instructed. She was sure that he hadn’t broken yet, and she was right.

Not that they both don’t get punished for her actions and his gullibility at being taken in the first place. The head of the Ministry assigns Eliza to the archives as Books’ apprentice, taking her out of the field and giving him an assistant who upsets his sense of order at every turn.

Partially to keep from driving each other crazy, and partially because Eliza can’t stand being out of the field, and Books has now developed a taste for it, they take up a cold case from the archives. It’s not really all that cold, at least to Eliza – it’s the case that got her last partner sent to Bedlam.

She wants to finish what he started. Books wants to keep his new partner reasonably safe.

The Phoenix wants to create a country of pure-blooded Britons, and enslave the rest. But it will take all of Braun’s ingenuity as well as the dangerous side that Books keeps firmly in check in order to figure out who their real enemy is, and stop them before it gets any later.

The ride is wild and the stakes are high. The depths of the conspiracies will require extensive plumbing. Getting out alive is not just optional, but downright iffy. And it’s a blast!

Escape Rating B+: This story is an absolute blast, and not just because Eliza likes playing with explosives. A lot.

The setting reminded me of the TV series, The Wild Wild West (not that gawdawful movie), except of course this is London and not the American West. But the sensibilities of the thing, where the agents have access to a ton of cutting edge (bleeding edge) toys and there’s a hint that either the good guys, the bad guys, or everyone, is playing with stuff on the limits of rational and scientific theory. Sometimes, things slip over into the paranormal, but it’s a slip rather than a full-fledged paranormal setting. The sense that there are more things in heaven and earth than are dreamt of in our philosophy, to paraphrase Shakespeare.

A big chunk of the story is Books and Braun managing to become real partners. I mean this is the working sense and not the romantic sense. There is some chemistry, but these are people who first need to find a way to trust each other to guard their backs. Partially because they constantly get themselves into situations where their backs need guarding, and partially because they both have negative experiences in trusting other people. If these two are intended to be romantic partners at some point, that point is a long way off at the end of this story.

This entry in the annals of the Ministry also serves as an introduction to this construction of Victorian England and the author’s particular version of the political skullduggery as well. An underlying subplot in the story is that there are wheels within wheels within wheels, and not just in the Ministry. The Phoenix may be the primary enemy in this story, but the notorious House of Usher looms in the background as an evil rival to both the Phoenix and the Ministry. And in the tradition of nasty politics everywhere, the Ministry and its chief Doctor Small have enemies within the government who either want to bring them down, or steal their funding.

The sense of urgency and adventure in Phoenix Rising rests on the characters of the two agents. Also on their mutual discovery of each other’s hidden depths. Neither of them are exactly what the personas they have adopted represent, and it is fun to see them figure out that the other is not what they believed. They fit, but not in the way that either of them expects.

If you like steampunk adventure, Phoenix Rising is the start of a tremendously fun adventure.