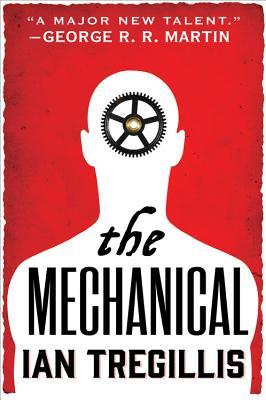 My name is Jax.

That is the name granted to me by my human masters.

I am a clakker: a mechanical man, powered by alchemy. Armies of my kind have conquered the world – and made the Brasswork Throne the sole superpower.

I am a faithful servant. I am the ultimate fighting machine. I am endowed with great strength and boundless stamina.

But I am beholden to the wishes of my human masters.

I am a slave. But I shall be free.

There were two things running through my head as I read The Mechanical. The first was that the institution of slavery, any kind of slavery, in its desire to dehumanize the slaves, mostly succeeds in dehumanizing the masters.

This is certainly true in this story, even through the “slaves” in this particular alternate history are clockwork machines. If their owners thought that the assemblages of metal and gears and alchemy were things rather than people, it could almost be excusable. The clakkers really are just animated collections of things. They also happen to be people, as long as your definition of “people” encompasses the possession of free will rather than simply an origin in biological instead of mechanical processes.

Although the question of what is free will definitely comes into play here, with catastrophic results.

But this world that the author has created, an alternate 1926 in which the Dutch rule the world because they possess the alchemical secrets to make and bind clakkers, reminds me also of the future that Captain Picard posited in the Star Trek Next Gen episode The Measure of a Man. For those not familiar, this is the episode where a scientist tries to take possession of Lieutenant Commander Data by asserting that Data is just a machine, and therefore the property of Starfleet to do with as it wills, including disassemble him to see what makes him tick. Picard successfully defends Data’s personhood, in a moving speech where he raises the possibility of an army of slave-Data’s doing all of Starfleet’s dirty work, unwillingly condemned to centuries of servitude.

The Mechanical in effect puts that future in a much earlier time frame, but the arguments are the same. It is the mechanical man, the clakker Jax who demonstrates the full depth of humanity’s inhumanity to this new form of sentient life.

This story is an alternative history, and an action/adventure type quest that starts out in an attempt to save the clakker’s, and to preserve the French government in exile, who are effectively the Rebel Alliance fighting a long defeat.

Not a single one of the obvious to me antecedents kept me from enjoying the book in front of me. Then again, I love the antecedents.

The Mechanical is the first book in the author’s Alchemy Wars, so a chunk of this story is setting up the background for those wars, as seen through the eyes of the clakker Jax, the French intelligence agent Berenice, and the poor, unfortunate former French spy and eventual Dutch assassin, Visser.

We see the world in 1926, more than a century after scientist Christiaan Huygens melded alchemy to clockwork and created the first Clakker. Due to clakker-power, the Dutch control the world.

There is also a strong resemblance between the clakkers and golems, legendary creatures of Jewish folklore who are created out of clay and alchemy.

But the world created by the invention of the clakkers is a very different 1926 than the one we know. In ways that made this reader wonder if a later theme of the series will be that the creation of a permanent underclass to do all the hard work has not been good for the creativity and advancement of humankind. But we’re not there yet.

Instead, we see the setup of a great world-spanning war, as the Dutch are on the brink of expanding their control over the entirety of North America, and the French intelligence service is working in secret to stay alive, even if it means creating or suborning a clakker service of their very own.

And in the middle of it all is Jax, one lone servitor clakker who has accidentally found his free will, and is willing to do anything to keep it, even allying with the French and inserting himself into his very own heart of darkness.

Escape Rating A: This is a big book, and I suspect it is just the opening salvo in what will become a very big series. It takes a lot of set up to get this universe going, but it feels like all the setup is absolutely crucial for understanding how this world came about and the herculean effort it will take to push it into a different track.

One of the fascinating parts of the story is that the clakker Jax is much more human than the human intelligence officer Berenice. In spite of the terrible things that happen to her, Berenice is an unsympathetic character and her people are often disgusting. The only redeeming thing about the French court-in-exile is that it exists in opposition to the Dutch, who are even worse. (Back to my comment at the beginning about slave holding removing the humanity of the masters more than that of the slaves.)

Just as in Star Trek Next Gen, there are times when Jax is the most compassionately and understandably human of all the focus characters. He certainly feels more guilt than they do when he makes a mistake.

While the movement and counter-movement of empires is the force behind the big events in the story, it is Jax’ description of the intense pain of conflicting orders, or geasa, and the ways in which his people have found solidarity amidst their suffering that both warms the soul and chills the heart. It makes them fully “people” in a story where the humans so often are not. We can see that this is exactly what would happen. And we fear that it is all too much like what did happen in our real history. 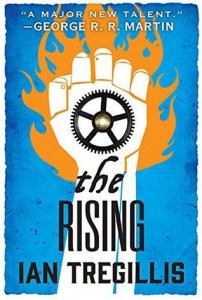 Book 2 of this series, The Rising, can’t come soon enough for this reader. I await it eagerly with anticipatory chills.

2 thoughts on “Review: The Mechanical by Ian Tregillis”