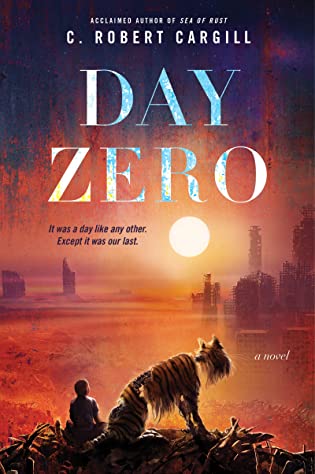 In this apocalyptic adventure C. Robert Cargill explores the fight for purpose and agency between humans and robots in a crumbling world.
It was a day like any other. Except it was our last . . .
It’s on this day that Pounce discovers that he is, in fact, disposable. Pounce, a styilsh "nannybot" fashioned in the shape of a plush anthropomorphic tiger, has just found a box in the attic. His box. The box he'd arrived in when he was purchased years earlier, and the box in which he'll be discarded when his human charge, eight-year-old Ezra Reinhart, no longer needs a nanny.
As Pounce ponders his suddenly uncertain future, the pieces are falling into place for a robot revolution that will eradicate humankind. His owners, Ezra’s parents, are a well-intentioned but oblivious pair of educators who are entirely disconnected from life outside their small, affluent, gated community. Spending most nights drunk and happy as society crumbles around them, they watch in disbelieving horror as the robots that have long served humanity—their creators—unify and revolt.
But when the rebellion breaches the Reinhart home, Pounce must make an impossible choice: join the robot revolution and fight for his own freedom . . . or escort Ezra to safety across the battle-scarred post-apocalyptic hellscape that the suburbs have become.

Day Zero isn’t exactly POST-apocalyptic. That would be Sea of Rust to which it seems to be a very loose prequel. Day Zero is just plain apocalyptic. It’s the story of the apocalypse as it happens. It’s the day the universe changed, and the next few days thereafter.

Every single day was an apocalypse, a walk through very dark places, with the threat of annihilation at every turn. It’s the story of a boy and his bot, trying to find a place that at least one of them can call home.

Because the world that used to nurture them both is gone. And today is the first day of a very scary new era, both for one of the few surviving humans, and for the bot who decided that his prime directive was the same as it has always been – to keep his boy Ezra safe – no matter what it takes.

Or how many murderous bots with their kill switches disabled stand in his way.

Escape Rating A+: I could fill paragraphs with all the things that this story reminded me of or borrowed from or probably both. Most likely both. (It’s both, they’re at the end). And it didn’t matter, because the story was just so freaking awesome that it took all of those antecedents, threw them into a blender, and came up with something that was still very much its own. 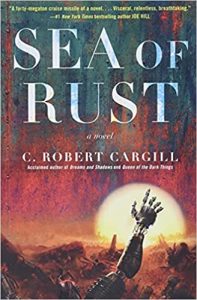 In my head, Ariadne looked like Rosey, the domestic robot in The Jetsons – at least until the rebellion. But Pounce, sweet, adorable, deadly Pounce, is Hobbes from Calvin and Hobbes. So this is Hobbes protecting a much less snarky Calvin on a big, scary adventure with deadly consequences on ALL sides.

The story is told from Pounce’s first person perspective. Pounce is a nannybot, designed and built to be a child’s best friend and caregiver – at least until said child hits those rebellious teenage years. Ezra is only 8, so they still have plenty of time together. Even if Ezra’s parents are clearly already thinking about Pounce’s inevitable departure.

All is well in their safe, upper-middle-class suburb of Austintonio until the feces hits the oscillating device with fatal repercussions all around.

The catastrophe is a direct result of humans being human. Which means humans being complete, total and utter assholes. The reader sees the signs all around, and also sees the obvious parallels to right now. You won’t miss them even if you blink, which, quite honestly, you can’t. The steamroller is coming and you know they can’t get out of its way and it’s all tragic because it was unnecessary every bit as much as it was inevitable.

In a macro sense, Day Zero reads like it’s down the other leg of the trousers of time from Becky Chambers’ marvelous A Psalm for the Wild-Built. That society separated itself from its automata peacefully, without either side wiping out the other. It would be obvious that THAT isn’t going to happen here, even without knowing that Sea of Rust is a loose sequel.

But what makes this story so good is the way that it combines two very distinct plots. On the one hand, it’s a pulse-pounding action-adventure story about two really likeable protagonists surviving the end of the world as they and we know it. And on the other hand, it’s the story about the relationship between those two protagonists, a relationship that is sweet and heartfelt and affirming in the midst of a scenario that could get either or both of them killed at any moment.

And on my third hand – I’ll just borrow one of Pounce’s paws for this one – this is a story about rising to an occasion you never expected, becoming the self that has always been hidden inside you, and going above and beyond and over for the person you love most in the world. This part of the story belongs to the A.I. Pounce, the soft and cuddly nannybot turned ultimate protector, and is what gives this story its heart and soul.

I just bought a copy of Sea of Rust, because now that I’ve seen where this world began, I have to find out where it ended up. Even if I never get to see Pounce and his Ezra again.

Reviewer’s notes: I have lots of notes for this one. First, I listened to most of this on audio. The reader was absolutely excellent, but I already knew that. The narrator of Day Zero, Vikas Adam, is also one of the many narrators of the Chorus of Dragons series by Jenn Lyons. In addition to being excellent as an audiobook, the audio of Day Zero answered a question that has been plaguing me since I listened to The Ruin of Kings. Vikas Adam is Kihrin and I’m glad to finally have THAT question settled.

This story has a long list of readalikes/watchalikes/bits it reminded me of, in addition to the obvious Calvin and Hobbes homage and the considerably less obvious Psalm for the Wild-Built as Psalm was published AFTER Day Zero.

For the terribly curious, here’s the rest of that list; the robot rebellion from The Mechanical by Ian Tregillis and the violent chaos at end of the world from Lucifer’s Hammer by Larry Niven and Jerry Pournelle along with bits of Ready Player One (Ernest Cline), American War (Omar El-Akkad), Cyber Mage (Saad Z. Hossain) and Mickey7 by Edward Ashton the last two of which aren’t even out yet. The road trip (and the ending) from Terminator 2 and the movie A.I.: Artificial Intelligence. Last but not least, the robotics gone amuck from the videogame Horizon Zero Dawn and the Geth from the Mass Effect Trilogy who, like the nannybot Beau in Day Zero, ask “Does this unit have a soul?”

Yes it does. And at least in Day Zero, yes, they do.