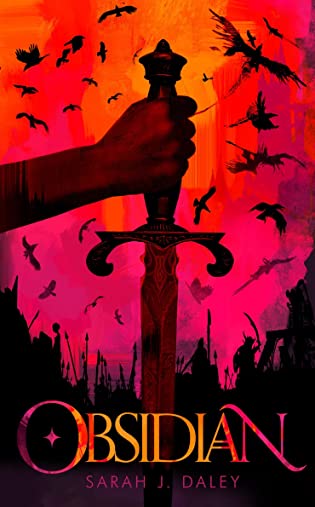 Shade Nox is a fiend, a rogue, and a wanted murderer, though her only true crime is that she chooses to dress like a man. Proud and defiant, she wears her tattoos openly as any bloodwizard would, and carries obsidian blades at her hips. Those who laughingly call her a witch to her face soon learn an unfortunate lesson: Shade Nox might be an abomination, but she wields her blades with devastating precision, gleefully shedding blood for elemental magic that matches any man’s.
Shade scratches out a dangerous living in the broken Wastes, but now that they are growing more unstable and dangerous, Shade and her people need their own Veil to protect them. She vows to raise one—a feat not accomplished in over a hundred years. But the Veils are controlled by the Brotherhood, who consider them sacred creations. They would sooner see all the Veils collapse into dust than allow a witch to raise one.
With the help of her friends and allies, and her own indomitable will, Shade stays one step ahead of her enemies. Her zeal is only tempered when she learns the true sacrifice required to raise a Veil—a secret even the centuries-old Brotherhood has forgotten. It is too high a price to pay. Nevertheless, she must pay it, or she will lose everything and everyone she loves…

Obsidian is just WOW! There, I’ve said it. Now I have to attempt to be articulate – and it’s not going to be easy.

Think of this as a post-apocalyptic story, but this is NOT our world, so this wasn’t our apocalypse. Just that there’s a point in the past that’s distant enough that civilization has regrouped while still present enough that effects are still being felt.

While the story opens with a somewhat disgraced former Captain of an Imperial Army, Raiden Mad is not our main character. That position is reserved for Shade Nox, who cuts her way into this story with her obsidian knives and holds onto the center of the narrative with hands dripping with blood – not all of it her own.

But some of it is, because the magic of this world is blood magic – blood magic that Shade, as a woman is not supposed to have or be able to wield. And doesn’t that sound all too familiar?

Especially since Shade seems to be much better at it than the blood wizards of either the corrupt church known as ‘The Brotherhood’ or the criminal ‘Capomaji’ who read like a protection racket run by Mafiosi – with magical enforcers along with the usual legbreakers.

Those traditional mages are losing their power – and, as the powerful often do – refusing to admit that loss while covering it up with even more repression of anyone of whom they do not approve.

Shade Nox is number one on all those lists.

But Shade has a secret. Of course, she has several, but one is big. HUGE. The size of an entire city. Or at least it will be IF she can manage to pull it off. And that’s where Raiden Mad and his Emperor come in – and why the Brotherhood is so desperate to take them all out.

Because at the same time the magic seems to be dying, the reason for that magic is becoming that much more of a threat.

Whatever the apocalypse was – it killed the ecology of the planet. The Brotherhood gained their power and their near-monopoly on so much more because their bloodmagic was the only thing that could carve out a safe bit of territory where life could thrive.

But power corrupts and absolute power corrupts absolutely. The Brotherhood has been so invested in maintaining their power that they’ve corrupted the way it is used for their own ends. Now it’s destroying them, the cities their power made possible, and the land that surrounds them.

Mother Nature bats last, and in this world she has a very big bat studded with thorns. So to speak.

Shade Nox has the power, most of the knowledge and all of the will to create a new, safe territory that won’t owe a damn thing to the Brotherhood. Who are bound and determined to stop her at all costs.

But not nearly so determined as Shade Nox is to beat them.

Escape Rating A+: If you’ve ever wondered what Dune would have looked like if someone took that climate catastrophe combined with precious resource planet and re-wrote the thing so that planet-native Chani was the protagonist instead of “white” imperial savior Paul you’d get something like Obsidian – although it probably wouldn’t be nearly as good. (I’m saying this and I loved Dune – at least the book versions.)

I think this is also going to remind readers more than a bit of the “Sapphic Saffron Trifecta” of 2021, The Jasmine Throne, She Who Became the Sun and The Unbroken, with their female-centered epic stories although Obsidian does not include much romance at all, queer or otherwise, until the very end.

There’s actually a bit of the Mage Winds of Valdemar series, in that the chaos magic that has wrecked most of this world seems to sweep in and alter everything it touches – people, plants and animals alike, with dangerous and deadly results. And it’s getting worse.

There’s also a bit of the blood magic of the Dragon Age series, although sideways a bit. Shade, and the magic she controls with her obsidian knives, is powered by her own blood willingly sacrificed. It does sound a bit bonzo when you read it, but it is self-limiting and those limits are dealt with. She can’t go too far or she’ll lose control, consciousness and die. She’s also not sacrificing anyone else to achieve her ends – which is one of the places where that Brotherhood has gone off the rails more than a bit.

The story here is about power, as epic fantasy so often is. The Brotherhood wants to keep the power they have. The Empire that Raiden Mad represents isn’t really a threat to local power, although they could be in the future. They just want to deal with some reasonable people – which the Brotherhood most certainly is not.

The empire could be a threat to local power later, but at this point, they’re at “the enemy of my enemy is my friend” stage of things. The Brotherhood has made itself the empire’s enemy. The Brotherhood is most definitely Shade’s enemy. So they are friends of expediency. The future may be different, but first they have to get there.

The heart of this story is Shade’s quest for the hidden knowledge that she needs to raise a protected territory of her own, and then making the sacrifices necessary to raise it. It’s a journey that takes her through a lot of dark places and even darker hearts – including her own.

And it’s not over when Obsidian ends. This feels like the start of a truly epic saga. I certainly hope so and am looking forward VERY MUCH to where the author takes us next!