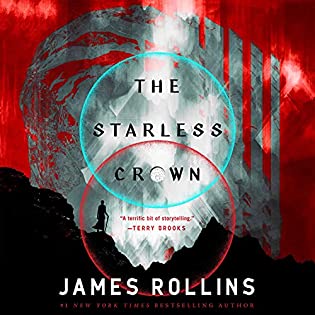 An alliance embarks on a dangerous journey to uncover the secrets of the distant past and save their world in this captivating, deeply visionary adventure from number-one 'New York Times' best-selling thriller-master James Rollins.
A gifted student foretells an apocalypse. Her reward is a sentence of death.
Fleeing into the unknown, she is drawn into a team of outcasts:
A broken soldier, who once again takes up the weapons he's forbidden to wield and carves a trail back home.
A drunken prince, who steps out from his beloved brother's shadow and claims a purpose of his own.
An imprisoned thief, who escapes the crushing dark and discovers a gleaming artifact - one that will ignite a power struggle across the globe.
On the run, hunted by enemies old and new, they must learn to trust each other in order to survive in a world evolved in strange, beautiful, and deadly ways, and uncover ancient secrets that hold the key to their salvation.
But with each passing moment doom draws closer.
Who will claim the starless crown?
A Macmillan Audio Audio production from Tor Books
©2022 James Rollins (P)2022 Macmillan Audio

“A fake fortune teller can be tolerated. But an authentic soothsayer should be shot on sight. Cassandra did not get half the kicking around she deserved.” At least according to Robert A. Heinlein in The Notebooks of Lazarus Long.

From that perspective, The Starless Crown is the story of Nyx, the authentic soothsayer – not that she would think of herself as such – receiving the full force of that kicking around. Deserved or not.

Definitely not – at least not in regards to anything that she personally has done. Not that she’s had a chance to do all that much when the story begins – as she seems to be just fifteen or thereabouts.

We meet her in school, in her astronomy class, as they study their “Urth’s” tidally locked rotation around the sun. A sun which they all refer to as the “Father Above,” the capital letters implied in the reverent way they speak of it. The Father Above is part of their pantheon of gods, along with the Mother Below (the Urth), the dark Daughter (the new moon) and the silvery Son (the full moon).

A catastrophe, shrouded in the mists of time, created the Urth that Nyx knows from the Earth that we now live on, locking our rotating world in a fixed position relative to the sun, so that only a relatively narrow circle is habitable for humans, in that relatively thin slice where the sun does not boil and its lack does not freeze. A circle that surrounds the Urth in just the same way that a crown surrounds the head of a monarch.

The story of The Starless Crown is Nyx’ story, as she breaks free of the shell she has been enclosed by her entire life. A story where she dreams of the destruction of her world – and the one thin chance where she might save something from the inevitable wreckage.

At a cost much higher than anyone is willing to pay.

Escape Rating A-: I listened to The Starless Crown from beginning to end. I enjoyed the listening – the narrator was very good and did an excellent job of differentiating the many, many voices of this story’s large cast.

At the same time, I didn’t feel compelled to finish it more quickly, so I didn’t pick up the ebook at all. The slower pace of listening worked better for me, because this is a slow burn kind of story. It takes a lot of chapters to get all the characters set up because they begin in far different locations under far different circumstances. We are seeing the plot come together from a great many disparate eyes.

And it takes a long time for all of those disparate – and sometimes desperate – parts to come together into the whole that is going to push this saga forward.

Part of my fascination with this story is that this is post-apocalyptic story that takes place in the far aftermath – an aftermath so far into the future that the people living it no longer recognize from whence they came – although we do.

Not that civilization as we know it wouldn’t break down and reform fairly quickly, messily and bloodily. In that sense it reminds me a bit of Aldiss’ Helliconia Trilogy, Stirling’s Emberverse starting with Dies the Fire, and the videogame Horizon Zero Dawn.

But the way the situation has evolved and devolved posits a corollary or an antonym to Clarke’s Law, the one that goes, “Any sufficiently advanced technology is indistinguishable from magic.” The Starless Crown is an example of something I’d want to call Harris’ Permutation if I were the person naming such things. Because this story is an example of a different principle, that “Any science sufficiently muddied by time or religious claptrap is indistinguishable from magic.”

They don’t know what they don’t know. Too much was lost in either the initial cataclysm or the long dark night that inevitably followed. What they’ve managed to find is now interpreted through a lens of religion, to which what we call science has become enslaved. And some of its methods are used to enslave others.

This is also a story of “Mother Nature bats last”. Whatever happened in the past that created the tidal lock, the coming moon fall feels like its inevitable result. The moon controls the tides. It can’t. So it keeps getting closer in order to try harder. Or something like that.

So we have a group that is not unlike the Fellowship of the Ring. A young seeress, a disgraced prince, a thief, an escaped slave, a living statue from the distant past on a quest to save their world – even if they don’t know it yet.

But the villains are fascinatingly – if occasionally stomach turning-ly – twisted, the heroes are plucky to the max and the escapes are nail-biting, hair-raising, edge of the seat last minute scrapes. The reveal of the past, the fear in the present and the desperate hope of even a fractured future are handled in lush descriptions and buckets of regrets, recriminations and tears.

I have no idea how this band of misfits is going to get themselves and their world out of the mess they are in, but I look forward to finding out.