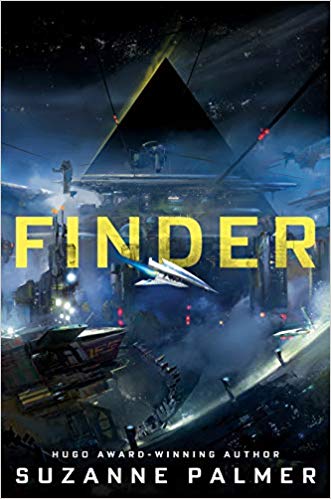 Fergus Ferguson has been called a lot of names: thief, con artist, repo man. He prefers the term finder.

His latest job should be simple. Find the spacecraft Venetia's Sword and steal it back from Arum Gilger, ex-nobleman turned power-hungry trade boss. He'll slip in, decode the ship's compromised AI security, and get out of town, Sword in hand.

Fergus locates both Gilger and the ship in the farthest corner of human-inhabited space, a gas-giant-harvesting colony called Cernee. But Fergus' arrival at the colony is anything but simple. A cable car explosion launches Cernee into civil war, and Fergus must ally with Gilger's enemies to navigate a field of space mines and a small army of hostile mercenaries. What was supposed to be a routine job evolves into negotiating a power struggle between factions. Even worse, Fergus has become increasingly--and inconveniently--invested in the lives of the locals.

Foolhardy. Eccentric. Reckless. Whatever he's called, Fergus will need all the help he can get to take back the Sword and maybe save Cernee from destruction in the process.

June is Audiobook Month, and Finder is one of those books that I picked up in audio and couldn’t wait to get into it. It’s one of those wild ride, thrill-a-minute stories that kept me sitting in my car in all sorts of places, just so I could hear just a bit more of whatever it was that Fergus managed to get himself into this time. Every time.

In the end I finished up with the book-book, or rather the ebook, because I just couldn’t start anything else until I discovered if/how Fergus finally managed to get himself out of both frying pan AND fire – and complete his self-imposed mission – without racking up too much more collateral damage along the way.

This is also a fantastic space opera, but not of the conquering star empires variety, which is cool and neat and different.

Fergus is the finder of the title. He’s kind of a repo man, but not exactly. He doesn’t repossess something because someone has missed a payment or ten. He finds things, big expensive things, that have been stolen and returns them to their rightful owners.

He’s at the ass-end of human-inhabited space, a collection of small-to-middling sized habitats strung out on power cables, named Cernee. The big thing he’s come to collect is a ship. Arum Gilger stole it from the shipbuilders, using an equally stolen ID, and the shipbuilders want it back. And it turns out that the locals are generally happy to help Fergus – up to a point – because they don’t like Gilger having that ship.

Fergus thinks the job is going to be easy. Get in, find the ship, steal the ship, fly it home to the Pluto shipyards, collect his pay. Get another job. Wash, rinse, repeat.

Instead, Fergus gets caught in the middle of a civil war. Arum Gilger wants to take over Cernee, and pretty much everyone and everything stands in his way. (Hence the reason that the locals are willing to help Fergus steal back the ship and get it the hell out of their space.) Especially the family Vahn, living on a remote habitat called “The Wheels”. It shouldn’t be Fergus’ business, but Gilger fires the opening salvo in his little war at the cable car that Fergus is sharing with “Mother” Vahn, and Fergus’ job has suddenly become personal.

Being nearly killed just for being in the same cable car as a seemingly inoffensive old lady is plenty of reason to get scared, to get angry, and to get to the bottom of everything that’s wrong in Cernee.

At least until everything that’s wrong in Cernee, including the mysterious alien ships that watch, and wait, and scare everyone three-quarters to death, decide that Fergus is their “true North” and all their ships start pointing towards him – wherever he goes, whatever he does – all the time.

Fergus may be the Finder, but something much bigger and much, much scarier has suddenly found him.

Escape Rating A-: First of all, this is one of those stories that naturally lends itself to audio. The story is told in Fergus’ first-person perspective, so hearing it in his voice from inside his head works well. The narrator does an excellent job of capturing Fergus’ world-weary (maybe that should be universe-weary), slightly deadpan voice. Fergus isn’t someone who gets really excited – because he’s been there and done that and is much too busy running away from the things that reach deeply into his emotions.

This doesn’t mean that the people around Fergus don’t get plenty excited, because the adventures that Fergus drags them into are generally frightening to the point of being downright life-threatening. Following Fergus is like being on one of those amusement park rides that barrels toward the edge of its track, to the point where you think the car is going to stop and you’re going to be thrown out of it, only to sharply turn – extremely sharply and very suddenly – and throw you against the sides as it madly careens towards the next near-disaster. (This ride in my childhood amusement park was the Wild Mouse, but yours undoubtedly had one too. They all did!)

Finder is very much one of those “out of the frying pan into the fire” stories. Fergus seems to be both a trouble and chaos magnet. They say that no plan survives contact with the enemy. It seems like no plan survives contact with Fergus, not even Fergus’ own plans. And yet, they generally manage to work in the end – for select definitons of “generally”, “work” and especially “end”. Either he has the devil’s own luck, as they say, or Cernee is connected to the Discworld, where “million-to-one” shots always come in.

There’s something about the way this story works, or perhaps in Fergus’ universe-weary voice, that reminds me of John Scalzi’s space operas. Especially The Android’s Dream, but generally the Old Man’s War universe. Fergus and John Perry would have plenty to talk about. That there’s a brief part of Finder that echoes Heinlein’s The Moon is a Harsh Mistress is totally fitting, considering the number of reviews that label Old Man’s War as Heinleinesque.

I digress just a bit, but not completely, as I think that Scalzi’s readers will also like Finder – very much. This one certainly did!