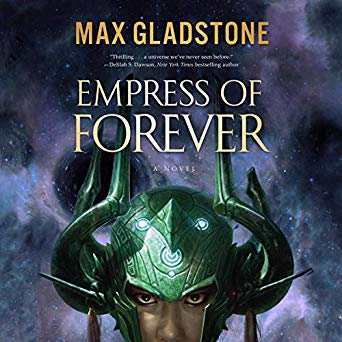 A wildly successful innovator to rival Steve Jobs or Elon Musk, Vivian Liao is prone to radical thinking, quick decision-making, and reckless action. On the eve of her greatest achievement, she tries to outrun people who are trying to steal her success. In the chilly darkness of a Boston server farm, she sets her ultimate plan into motion. A terrifying instant later, she is catapulted through space and time to a far future where she confronts a destiny stranger and more deadly than she could ever imagine. The end of time is ruled by an ancient, powerful Empress who blesses or blasts entire planets with a single thought. Rebellion is literally impossible to consider--until Vivian Liao arrives. Trapped between the Pride—a ravening horde of sentient machines—and a fanatical sect of warrior monks who call themselves the Mirrorfaith, Viv must rally a strange group of allies to confront the Empress and find a way back to the world and life she left behind.

Empress of Forever is an intergalactic space romp with a lot of interesting things to say – and a whole lot of fun to read.

Part of that fun is in the person of its heroine, Vivian Liao. In the story’s near-future opening, Vivian reads like a combination of Steve Jobs, Elon Musk and Alexandria Ocasio-Cortez all rolled into one hard-driving steamroller of a ball. Vivian is a rich and successful tech genius who may be distant from her friends but puts her money where her mouth is when it comes to her political viewpoints.

She’s made a lot of enemies, showing up the forces of the status quo for the greedy scumbags that they are. As the story begins, Vivian is on the verge of her greatest triumph. But she knows that it’s all just part of the show, to set her up for her greatest fall.

Vivian has a plan. Vivian always has a plan. She plans to wipe herself out of all the all-seeing eyes and all-knowing databases that her companies have created – and start again. In a new place, under a new name, building a new fortune.

Until her desperate raid of a Boston super-server farm brings her to the attention of the Empress of a galaxy-spanning empire that Vivian had no idea was even out there. A crystal jade goddess who literally plucks Vivian’s heart out of her chest and extracts her from the world she knows.

Vivian wakes up inside a viscous bubble, trapped in a world that might be the future. Or might be parallel. But is certainly deadly – and she has no way out except through the Empress who grabbed her in the first place.

So Vivian Liao does what she always does – she goes forward. Even when she has no idea where that forward will lead. She’ll figure it out. She always does. No matter what it costs. Or already has.

Escape Rating A-: I had an absolute ball with this. This was one of those books that I picked up in audio and was extremely glad I did. The story is told from Vivian’s first-person perspective, so we’re inside her head the whole way. And what a wild way it is.

The reviews are comparing Empress of Forever to Guardians of the Galaxy – albeit with a feminist bent. I’m not sure that comparison does either work justice.

Vivian certainly does collect a “Scooby Gang” of her very own, and some of the gang are a bit – or in one case much, much more than a bit – outside the law. And there’s a lot of manic humor in both stories. But Guardians has way more light-heartedness at its core (at least in the first movie) than Empress ever does. The humor in Empress has much more of a gallows tinge to it.

After all, the fate of the universe is at stake – even if Vivian doesn’t know it at first.

Then again, there’s a whole lot that Vivian doesn’t know at first, at second, or sometimes even at all. She is very much a fish out of water in this story – and we’re right there with her. For most of the story, she’s not sure whether the universe she has been thrust into is the future of the world she knew – or exists parallel to it. Either is possible, and both are completely alien to her.

She finds herself at the head of her little gang of outlaws, rather like Dorothy in the Wizard of Oz, trying to find her way home. But this is not a dream – and home isn’t quite what she thought it was.

Vivian thinks she’s trying to find a way back, but what she really does is find her way to friendship, one misfit at a time – with herself the biggest misfit of them all. Along the way, she tours this strange new galaxy that she has been thrust into, discovering both wonders and terrors, and learning so many ways that things have gone wrong.The story of Vivian’s exploration is a tour de force of as many SF tropes as the author could squeeze into one madcap adventure. It worked for this reader, but you have to be of the persuasion that too much of a good thing is wonderful, and not every reader is.

Instead of Guardians of the Galaxy, the story that Empress of Forever reminds me of the most is the Doctor Who episode Turn Left. This is a story where we get to see what would happen if one character made one seemingly insignificant choice differently – and the universe goes to hell in a handbasket.

The Empress is searching for an alternative to her own future, because her present has creatures like the Reapers in the Mass Effect Universe eradicating every galactic civilization that reaches a certain level of technological achievement being absorbed by the rapacious aliens – and they’re coming for the Empress.

Vivian has met the enemy, and to paraphrase the immortal words of Walt Kelly’s Pogo, “we have met the enemy and she is us.” I figured this out relatively early on, but was happy to settle in for the wild ride. What made this story special is that the big reveal was not the ending – only a spur to Vivian to go onward to a conclusion that I did not expect.

Vivian has the possibility of success because she turned left. It’s not the technological solution that the Empress expected to find. Instead it’s the human solution that she rejected long, long ago.

Like the Joe Cocker song made famous by the Beatles, Vivian gets by with a little help from her friends, because she finally figures out that she needs somebody to love. That home is where the heart is, and that she has one after all.