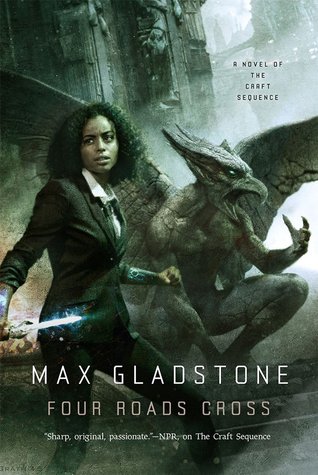 The great city of Alt Coulumb is in crisis. The moon goddess Seril, long thought dead, is back—and the people of Alt Coulumb aren't happy. Protests rock the city, and Kos Everburning's creditors attempt a hostile takeover of the fire god's church. Tara Abernathy, the god's in-house Craftswoman, must defend the church against the world's fiercest necromantic firm—and against her old classmate, a rising star in the Craftwork world.
As if that weren't enough, Cat and Raz, supporting characters from Three Parts Dead, are back too, fighting monster pirates; skeleton kings drink frozen cocktails, defying several principles of anatomy; jails, hospitals, and temples are broken into and out of; choirs of flame sing over Alt Coulumb; demons pose significant problems; a farmers' market proves more important to world affairs than seems likely; doctors of theology strike back; Monk-Technician Abelard performs several miracles; The Rats! play Walsh's Place; and dragons give almost-helpful counsel.

The world of the Craft Sequence is guaranteed to give any reader a lingering book hangover. This is a world that requires the reader to throw out all of their preconceived notions about religion, magic, gods, demons, law, order and chaos. Not necessarily in that order, and on a continuously repeating cycle.

In this universe where the gods are not only made real, but can be fought in real terms and killed, worship is power and power is money and money is power and the ends all too often justify the means. And the lawyers are necromancers. Or the other way around.

Seril was supposed to have been killed 40 years ago, at the end of the God Wars that brought The King in Red into power in Dresediel Lex. But she wasn’t. It’s hard to kill a god. Not impossible, but damnably difficult. Now that Seril is back, someone is using her as a lever to take down Kos. Even though taking down Kos will send not just all of his contracts, but all of the financial markets that use Kosite debt as a baseline, into financial chaos.

The mess that will ensue could make the Great Depression, the Great Recession and Brexit fade into a pinprick, even if they had all happened at once.

What happens is a race against time. Tara wants to save the city that holds her friends from the catastrophic bloodshed and chaos. Abelard wants his god to remain in control of his own fate, and to continue to be a real part of the lives of his citizens and worshippers. Seril wants to survive. And someone wants to cause the downfall of the last of the old gods, no matter who gets killed, or how many dark means they need to use to justify their grisly ends.

Escape Rating A: Nothing about the world of the Craft Sequence is anything like any fantasy you have ever read. Even the sequence itself was published out of order; Three Parts Dead is the first book, Four Roads Cross is the fifth.

But read them all, because the creation of this world fills in one complex layer at a time. Just like the series of interlocking contracts and agreements written by the Craft.

While Four Roads Cross sometimes seems as if it directly follows Three Parts Dead, the events of the intervening works also seem to influence the action. Or at least the knowledge that the reader gains about the world seems to influence either the action or one’s feelings about it and understanding of it. Read the series, and be prepared to sit and think for a while in between.

(The author has stated that the numbers in the titles reflect the internal chronological order of the books, as opposed to the publication order. Pick an order and dive in.)

There is a lot in this story about the way that humans create gods in their own image, and the way that those images in turn influence the humans who fall under their sway. Seril needs her worshippers every bit as much as her worshippers need her. What makes the relationship between gods and humans different in this world from our theology is that the benefits of the relationship are tangible for both parties. Seril gets power, and in return she provides real aid and assistance. 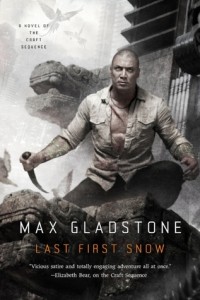 Like the other books in this series, this one rides on the strength of the different and surprising relationships that have formed, particularly in the wake of the events of Three Parts Dead. We also see a much different perspective on Craft and the persons who practice it than we have previously. Elayne Kevarian, the Craftswoman who carries much of the action in Three Parts Dead and Last First Snow, has stripped herself of almost all human relationships in her quest for the ultimate in Craft and eventual immortality. At the end of Last First Snow, we see her wondering about some of her choices.

Tara Abernathy, Elayne’s apprentice in Three Parts Dead, is choosing another road. In spite of everything her craft has taught her, she forges friendships, sometimes in spite of herself. The conflict in the end is about those who use others for their own ends, and those like Tara, and the goddess Seril, who take their strength from their relationships with others.

Virtue may not be its own reward, but at least in this story, there is strength in even a fractured unity. And it is a wonder to read, and to behold.

Tor Books is letting me give away a copy of Four Roads Cross to one lucky US/CAN commenter: