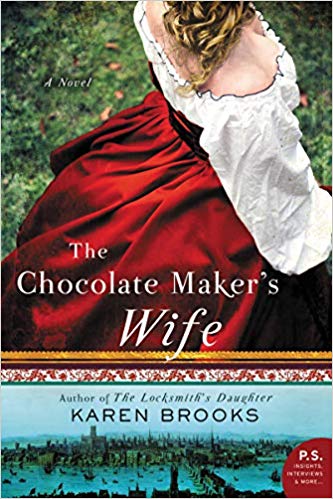 Australian bestselling novelist Karen Brooks rewrites women back into history with this breathtaking novel set in 17th century London—a lush, fascinating story of the beautiful woman who is drawn into a world of riches, power, intrigue…and chocolate.

Damnation has never been so sweet...

Rosamund Tomkins, the illegitimate daughter of a nobleman, spends most of her young life in drudgery at a country inn. To her, the Restoration under Charles II, is but a distant threat as she works under the watchful eye of her brutal, abusive stepfather . . . until the day she is nearly run over by the coach of Sir Everard Blithman.

Sir Everard, a canny merchant, offers Rosamund an “opportunity like no other,” allowing her to escape into a very different life, becoming the linchpin that will drive the success of his fledgling business: a luxurious London chocolate house where wealthy and well-connected men come to see and be seen, to gossip and plot, while indulging in the sweet and heady drink.

Rosamund adapts and thrives in her new surroundings, quickly becoming the most talked-about woman in society, desired and respected in equal measure.

But Sir Everard’s plans for Rosamund and the chocolate house involve family secrets that span the Atlantic Ocean, and which have already brought death and dishonor to the Blithman name. Rosamund knows nothing of the mortal peril that comes with her new title, nor of the forces spinning a web of conspiracy buried in the past, until she meets a man whose return tightens their grip upon her, threatening to destroy everything she loves and damn her to a dire fate.

As she fights for her life and those she loves through the ravages of the Plague and London’s Great Fire, Rosamund’s breathtaking tale is one marked by cruelty and revenge; passion and redemption—and the sinfully sweet temptation of chocolate.

The story of The Chocolate Maker’s Wife is every bit as lush and decadent as the bittersweet confection that she learns to make – and most definitely promote and sell – in her role as the young, pretty wife of an older man who owns both a revolutionary chocolate house and an entire bubbling vat of deep, dark, but not so luscious secrets.

As ubiquitous as chocolate is in the present day – and as much as its taste, aroma and flavor are loved or even craved, once upon a time in Europe chocolate was very much a curious novelty imported from the “New World” – as, for that matter, were both tea and coffee, although both had their origin in other places.

The Restoration period in England, the 1660s when The Chocolate Maker’s Wife takes place, was a time of great upheaval, of which the introduction of chocolate was perhaps the least if not the tastiest. This was the period when the monarchy was restored after Cromwell’s Protectorate, and Puritanism gave way to the Church of England.

Over 10 years of habits of life and thought changed overnight when Charles II took the throne that his father had been forced from – and later beheaded for occupying. This was a time when the universe as they knew it changed. And did again during the course of this story when the Great Fire of London consumed the city in 1666.

Each of these world shaking events had an equally cataclysmic effect on the life of Rosamund Blishwick, nee Tomkins. And it is her eyes through which we see this world, and hers, as it changes. And most definitely sparks.

At first it seems as if Sir Everard Blishwick is rescuing Rosamund not merely from tiny Gravesend, but also from multiple fates worse than death.

But of course, all is not as it seems. What seems like a rescue is only the first step in a long drawn out campaign of revenge that sucks Rosamund deeply into its web – and launches her into a future she could never have dreamed of.

Escape Rating B-: This is very much a mixed feelings kind of review. There were aspects of this book that I enjoyed, and others that drove me a bit bonkers. The Chocolate Maker’s Wife is the kind of lush, overblown historical epic that they don’t make any more. And as much as I loved just this kind of story once upon a time, it also reminded me both of why they don’t make them any longer and why I don’t look for them either.

(Something about this book reminded me a lot of Through a Glass Darkly by Karleen Koen. Which I read decades ago. I think it had to do with the lushness of the setting, the darkness of the secrets, the disposition of the heroine and the more than occasionly repetitive and slightly overblown language. But it’s been a long, long time. Still, the impression lingers. Make of that what you will.)

The strongest part of the story is the period setting. The author’s research into the Restoration period is exhaustive – and occasionally exhausting for the reader. The early years of the Restoration were a period of great change, capped off by the Great Fire which wiped out so much of London and wiped so many slates clean – except for the ashes.

It is a fascinating period in so many ways, as the parliamentary experiment failed, the monarchy was restored and everyone tried to go back to the way things were. Except that the genie never goes willingly back into the bottle, too much time had passed and too much had changed. But this story takes place during that change and we see the effects on the ground, so to speak, through Rosamund.

She begins the story as a young woman slaving away for her stepfather, ignored by her mother and routinely sexually abused by her stepfather and two adult stepbrothers. It’s a brutal life that Sir Everard rescues her from. Her “family” seem to be trying to erase their past as loyal Cromwell supporters, even her stepbrothers’ names betray their earlier loyalties.

But Rosamund was used and abused by her family, and then used by her new husband as well. Not for sex, but in his schemes for his chocolate house and his revenge against a family he claims wronged him. That Rosamund’s advent as a woman in the public sphere invites at least attempts at abuse from every man at nearly every turn seems a bit egregious. Not that it wouldn’t have happened, but there is a point where one wearies of reading about it happening again. And again. And yet again. (Wanting to hex them all seems to be a common response.)

At the same time, Rosamund seems a bit too good to be true. Everyone who comes into her orbit either wants her, loves her, or both. The degree to which she charms nearly everyone gives her the aura of a “Mary Sue”. Her times absolutely fascinated me, but her personality just didn’t make me want to follow her through them.

In the end, as much as I loved both the concept of this book and its setting, I didn’t love the book because I didn’t find its central character compelling. Or perhaps I simply had enough of the frequent repetitive descriptions of her tinkling laugh.

Your mileage may definitely vary. Meanwhile, I’m going to have some hot chocolate.

3 thoughts on “Review: The Chocolate Maker’s Wife by Karen Brooks”