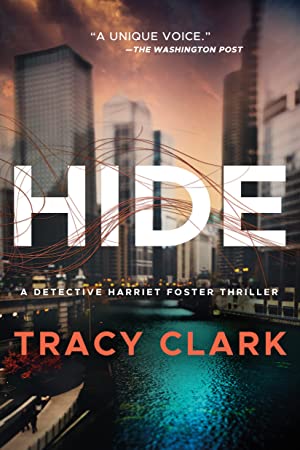 From acclaimed author Tracy Clark comes a page-turning mystery featuring hard-boiled Chicago detective Harriet Foster, who’s on the hunt for a serial killer with a deadly affinity for redheads.
When a young red-haired woman is found brutally murdered in downtown Chicago, one detail stands out: the red lipstick encircling her wrists and ankles.
Detective Harriet Foster is on the case, even though she’s still grieving the sudden death of her partner. As a Black woman in a male-dominated department, Foster anticipates a rocky road ahead acclimating to a new team—and building trust with her new partner isn’t coming easily.
After another victim turns up with the same lipstick markings, Foster suspects she’s looking for a serial killer. Through a tip from a psychiatrist, Foster learns about Bodie Morgan: a troubled man with a twisted past and a penchant for pretty young redheads with the bluest eyes. As Foster wades into Morgan’s sinister history, the killer continues their gruesome assault on Chicago’s streets.
In her desperate race to catch the murderer before they strike again, Foster will have to confront the darkest of secrets—including her own.

When we first meet Harriet Foster, we know two things. She’s a Chicago cop, and she’s a survivor. And at the moment, the one is inextricably linked to the other, both in the sense that it’s being a cop that gives her the tenacity to keep on living, and it’s being a cop that makes it necessary to have that sheer, driven stubbornness in the first place.

It’s late in the fall, it’s Chicago, it’s cold, and she’s having a damn hard time getting herself across the threshold of her new precinct. She’s just back from eight weeks leave after the senseless killing of her son, the subsequent death of her marriage and the suicide of her police partner in the parking lot of her previous precinct.

She’s thrown right into the deep end as soon as she gets through the door. Her new ‘partner’ is the department’s hard case, and they’ve just caught one. A naked, dead, butchered woman badly hidden under a pile of leaves in a park just off the Riverwalk.

It’s a spectacular mess, the scene is already a spectacle, and the lookie-loos and media are already out in force right along with CPD. Her partner is just so sure that the killer is the young black man who was found sleeping nearby with a single bloodstain on his lapel. Harriet is pretty sure it wasn’t him, because if he’d been the murderer there’d be way more than a single bloodstain on his clothes. He’d be drenched in the stuff.

And she’s certainly unwilling to rush to any judgment. Not just because the young man is the same age as her dead son. Harriet Foster just isn’t the kind of cop who rushes to judgment – even on her worst day.

Which this is already shaping up to be. Worst day, worst week, worst month, worst case. Someone is out there eviscerating redheads, managing to stay just one step ahead of the cops. The news media are baying for somebody’s blood and City Hall is looking for a scapegoat.

But Harriet Foster keeps putting one step in front of the other, one long day and even longer night after the other, using the frustrations of the case to keep her own demons at bay. In the end, she’ll at least have put one monster to rest – even if it’s not one of her own.

Escape Rating A+: This one absolutely had me from the very first page. While some of that was because I can still see most of the settings in my head, it was mostly because of Harriet Foster herself. She’s trapped like an insect in amber, still processing – slowly and badly – her recent losses and hoping that something in going back to the job is going to get her through the day and the one after that and the one after that.

At the same time, she is exactly the kind of protagonist that I read mysteries for, in that she’s questioning and human and oh-so-capable all at the same time. It’s so clear that she hasn’t remotely got her life figured out, but once the case begins she’s all there for it.

That she’s experienced enough to know when to push back on a shit-talking so-called partner and when to suck it up and stand in solidarity with the rest of the cops in her new cop shop just felt right.

And then there’s the case, which is just the type of twisted, humdinger that reminded me so much of the kind of case that Eve Dallas ends up trying to unravel in the In Death series. The bodies are gruesome, the clues are few, the perpetrator is clever and the media vultures are circling.

At the same time, we have alternating perspectives from people who might, or might not, be involved in the mess, from childhood memories of a murderous daddy to adult children trying to pretend they’re normal to a rogue psychologist looking for her next star psychopath. They bring both perspective and confusion to the mystery, allowing the real perpetrator to hide in plain sight.

As much as the case reminded me of many in the In Death series, Harriet Foster only resembles Dallas in her dogged determination to solve the mystery and put the guilty party either away or under. There’s no romance even hinted at here and there shouldn’t be. Harriet’s personal story is about her determination to find a way forward and to spot the light at the end of her personal tunnel of grief. She’s far from there yet, which bodes well for future entries in the series.

What we have in Hide is a case of one person unraveling, and one person, well, raveling. When the murderer starts coming apart, their descent is swift and sprays lots of collateral damage. Harriet Foster, on the other hand, is oh-so-slowly raveling herself back together, one day, one clue, and one paper clip at a time. And her progress, both on the case and on herself, is utterly absorbing to watch. 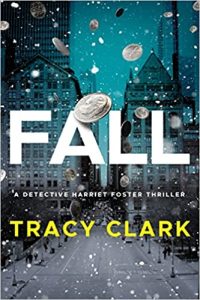 Hide is the first book in what looks to be a compelling mystery suspense series. While it isn’t officially out until January 1, it is available NOW to Amazon Prime members as one of the Amazon First Reads books this month. So if you are as impatient to read it as I was there is a way to get it this month.

The second book in the series, Fall, will be out one year from now. And I can’t wait to see how and what Harriet will be doing next winter. In the meantime, if you’re on the hunt for a series with a similar vibe, take a look at Harriet’s British counterpart, Inspector Anjelica Henley, solving the case of The Jigsaw Man.