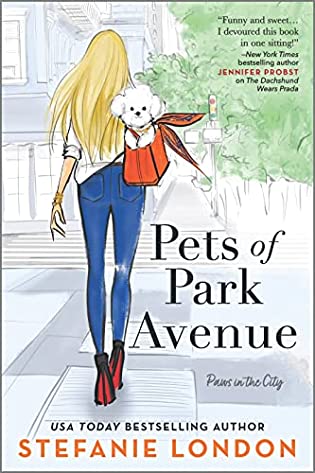 "One of the year's most delightful rom-coms."—New York Times bestselling author Julia London on The Dachshund Wears Prada
The perfect romcom for dog lovers! Pets of Park Avenue is the story of a self-confessed hot mess who learns that life is more fun when things don't go according to plan.

What do you do when The One is also the one who broke your heart?

Self-proclaimed hot mess Scout Myers is determined to prove she’s finally got her act together. Raised by grandparents who saw her as her wayward mother’s wayward daughter, Scout’s used to being written off. So when the opportunity for a promotion arises at Paws in the City, the talent agency where she works, Scout is desperate to rise to the occasion. With shared custody of her little sister also on the line, Scout can’t afford a single mistake…like suddenly needing a canine stand-in for an important photoshoot. Luckily (or not) she knows the owner of the perfect pup replacement: the estranged husband she walked out on years ago.
On the surface, it appears Lane Halliday’s life has been blissfully drama free without Scout, but she suspects her handsome-as-ever not-quite-ex-husband doth protest too much. Working together even feels like old times—except for all that lingering, unresolved tension. But Scout’s not sure she’s ready to confront the reasons she left Lane, and when their plans to finalize the divorce become very real, Scout starts to wonder whether second chances might be worth a little hot mess.
Paws in the CityBook 1 - The Dachshund Wears Prada

Pets of Park Avenue combines a second chance at love romance with a bit of a comedy of errors wrapped around the paws of an adorably fluffy little Bichon Frisé who seems to be experiencing nearly as much sad fluff as her people.

Both the one she still has and the one that only thinks she got away. 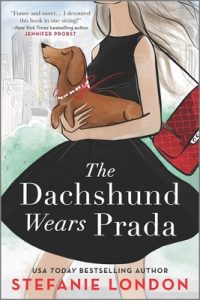 This followup to The Dachshund Wears Prada follows the second member of the Paws in the City media team, that self-proclaimed hot mess – and Isla’s best friend – Scout Myers. When the small agency’s star Bichon Frisé, Sasha, is accidentally dyed hot pink in the middle of a big opportunity for both the dog and the agency, Scout is the one sorta/kinda in charge of their canine charge.

At least, she’s the one who feels responsible for the accidental dye-job. Because being held responsible for every accident that happens in her vicinity and taking the blame for all the fallout is just what her cold, rule-bound, hidebound grandparents have conditioned her to do.

Theirs was not a house in which the phrase “shit happens” was ever even uttered, let alone believed. If Scout was nearby, it must have been her fault – whether it was or not. Because Scout was just like her mother, their wayward daughter, and had to be straight-jacketed into proper behavior no matter how much it broke her spirit.

Reining Scout in was the only way her grandparents could hope to save Scout’s little sister Lizzie from her terrible influence. So they did. At every opportunity. Until they kicked her to the curb at age 21. For not being properly obedient and respectful and for not following every last one of their stifling and arbitrary rules.

So Scout feels responsible for the temporarily pink Bichon, and needs a well-behaved substitute until the dye and the resulting buzz-cut grow out. Which is where her not-exactly-ex-husband, and his suddenly not-exactly-perfectly-behaved Bichon come in.

Scout ran out on both the man and the dog five years ago because, well, reasons. Reasons that they never told each other. They were together for one glorious month and have been separated for five years of limbo but Scout needs a dog just like Sasha, and Twinkle Stardust (yes, really) is her best chance to fix what’s broken.

With the agency and possibly with herself.

What she really needs is to either put her past behind her or, perhaps, put it back in front of her again. She’s a bit older, possibly wiser, and trying to be more responsible. Because she wants custody of her teenage sister. Because she needs to start adulting.

And because she’s never found anyone to remotely match the one that she left behind.

Escape Rating B: The thing about Pets of Park Avenue that made this one so interesting was that it’s Scout’s discovery that she doesn’t need to get it together because she’s had it together all along. It’s also about the difference between what is said and what is meant, and that’s a sad and often hard lesson to learn.

In other words, Pets of Park Avenue isn’t as light and fluffy as one of the Bichon Frisés. I missed The Dachshund Wears Prada, at least the social media account that both establishes Isla as a media influencer AND gets her in so much trouble. Because the voice of the Dachshund that Isla puts out there is wry, funny and so very sharply observant that it gives the book a lighter tone than this one in spite of just how much Isla also needs to overcome.

Scout IS a hot mess in this book, but not for any of the reasons she thinks she is. She’s a hot mess because that’s all she’s ever been told she can be, and she’s taken that lesson so very much to heart. Throughout the story, it seems as if her grandparents are the villains of the piece. And they kind of are. 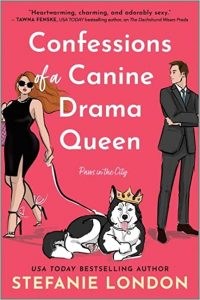 But they also kind of aren’t. Or at least, they didn’t intend to be. But what they meant versus what they said and how they said it, how much they saw AND treated Scout as if she was a carbon copy of her mother, sent their relationship and Scout herself off in some terrible directions that she spends the whole story dealing with.

The second-chance-at-love romance was, at first, heartbreaking. But as the story continues, they are both forced to acknowledge that they were just too young and too impulsive. The bitter turns to sweet as they look back at themselves and look now at each other in order to figure out what direction they need to go, together or apart. Either way would have made a satisfying ending, but I preferred the direction they chose – if only to give Twinkle Stardust her own happy ever after.

So The Dachshund Wears Prada had a whole lot more lightness in it. Pets of Park Avenue was leavened with a bit more bittersweet. I’m looking forward to seeing what just what kind of canine and human drama we’ll get in Confessions of a Canine Drama Queen next summer!