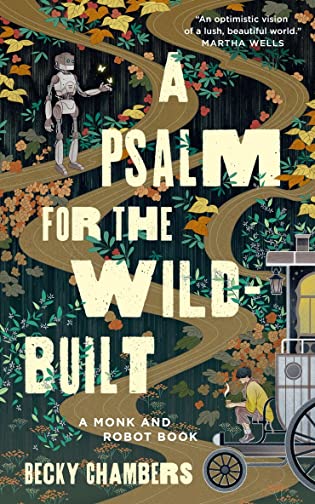 In A Psalm for the Wild-Built, Hugo Award-winner Becky Chambers's delightful new Monk & Robot series gives us hope for the future.
It's been centuries since the robots of Panga gained self-awareness and laid down their tools; centuries since they wandered, en masse, into the wilderness, never to be seen again; centuries since they faded into myth and urban legend.
One day, the life of a tea monk is upended by the arrival of a robot, there to honor the old promise of checking in. The robot cannot go back until the question of what do people need? is answered.
But the answer to that question depends on who you ask, and how.
They're going to need to ask it a lot.
Becky Chambers's new series asks: in a world where people have what they want, does having more matter?

A Psalm for the Wild-Built turned out to be a surprisingly lovely read about both finding oneself and finding friendship, even if there were plenty of times when I wondered where on earth, or rather where on Panga, the entire thing was going.

But that turned out to be the appropriate reaction, as there were plenty of times when Sibling Dex and Mosscap wondered, separately and together, where their journey was going, and if they’d recognize their destination when they finally reached it.

Assuming they ever did.

At first, this reads as a story of self discovery of one particular self, the person of Sibling Dex. Dex (If the name reminds you of Stargate: Atlantis you are not the only one.) Dex’ world is not our world. It may or may not have ever been our world, but it certainly isn’t by the point of their “now”.

Because Sibling Dex’ now is in a post-industrial age. It also seems to be in a post-consumerism age and certainly a post-robotic age. Money still has value, and people still work for wages or exchanges – Dex seems to work for exchanges as much as they do for credits – but it seems very different from our now.

And that’s because there doesn’t seem to be any artificially inflated “wanting” of stuff. The Joneses don’t seem to exist to be kept up with. There’s nothing in the story about how they got past our never-ending hunger for “more”, but somehow they did.

Or at least they did in the material sense. The emotional sense, the fulfillment sense, is still alive and well and eating Sibling Dex up more and more each day. They had a good life as a monk, a servant to one of the gods, but it wasn’t enough. So they started over again as a tea monk, traveling the countryside and dispensing special blends of tea, places to rest and relax, and solace when people needed it.

After a rocky start, Dex is very good at it. And it’s a fulfilling life, but it seems to fulfill Dex less and less with each passing day. So Dex turns off the road well-traveled for a trek out into the wilderness in search of whatever undefined something is not present in their life as it is.

And that’s where the story really begins, as the monk with no idea about what they really want meets the robot who has volunteered to discover what humans really want. Neither of them has a clue, about their journey, about their destination, or about each other.

Escape Rating A-: I really didn’t know what I was getting myself into when I opened this book. Kind of like Sibling Dex doesn’t know what they’re letting themselves in for when they take that road much, much less traveled. 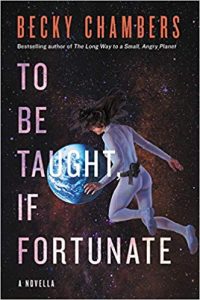 I was hoping that whatever I got would be as good as To Be Taught, If Fortunate. That hope was most definitely fulfilled. But there was a point – actually several points – where I was as much in the dark about the book’s journey as Sibling Dex was about their own.

The setup for this is fascinating – so I’m really happy that this appears to be a series and we’ll get to visit Panga again. Some of that fascination is in the way that human nature is either vastly different from the way humans behave here and now – or that they’ve evolved a long way from where we are now. Or both.

Because in Panga, in the not all that far past, in its factory/industrial era, the humans created robots to do the hard work for them. When the robots slipped over the line into self-awareness and asked to leave to pursue their own goals, the humans let them go. Without pursuit, without rancor, without warfare.

If you’ve ever played the Mass Effect Trilogy, then you may understand my astonishment. In that universe, one race created robots to do their hard work for them, but when the robots asked if they had souls, their creators attempted to wipe them off the face of the galaxy. And failed, miserably, for both sides and pretty much everyone else.

That’s the reaction we tend to expect, that humans or their equivalent will go to war to hang onto what they believe is theirs. But in Panga, we got enlightenment – and environmentalism! – instead. Or something damn close to it.

The robots have gone their own way, far into the wilderness, to find their own fulfillment. Or to spend decades watching stalactites grow. Whatever floats their individual and particular boat. They’ve learned to find purpose in just being, rather than endlessly doing.

But they do wonder what humans have done in their absence. Not out of fear, but out of curiosity. And that’s where Dex meets Mosscap, in that realm of curiosity. Dex wants to learn whether or not the life they have is all there is. Mosscap wants to explore what humans are.

At first they are more than a bit at cross purposes. Mosscap knows it needs a guide, while Dex refuses to admit that they do as well. What makes the story work is the way that they learn to come together in friendship. Their discovery that what they have both been looking for is each other – even if, like so much else of their journey towards each other – they had no clue.

The story asks a lot of questions that echo after it ends. It’s a story that asks, “is that all there is?” but slyly leads the reader to think about the meaning of that phrase. Because it’s never about anything we expect.

But at the end, what makes this story so very lovely is the friendship between two beings who have nothing in common, but who, in the end, have everything in common – along with a comforting mug of tea.

The second book in this series, which is being called solarpunk but feels more like hopepunk, is A Prayer for the Crown-Shy, and will hopefully come out sometime next year.

One thought on “Review: A Psalm for the Wild-Built by Becky Chambers”