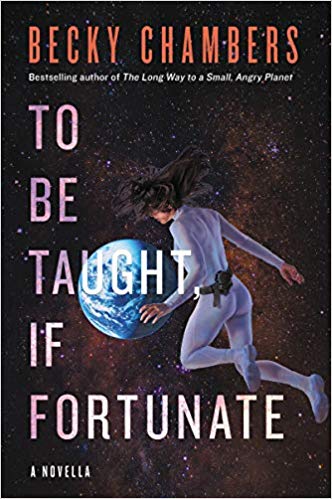 In her new novella, Sunday Times best-selling author Becky Chambers imagines a future in which, instead of terraforming planets to sustain human life, explorers of the solar system instead transform themselves.

Ariadne is one such explorer. As an astronaut on an extrasolar research vessel, she and her fellow crewmates sleep between worlds and wake up each time with different features. Her experience is one of fluid body and stable mind and of a unique perspective on the passage of time. Back on Earth, society changes dramatically from decade to decade, as it always does.

Ariadne may awaken to find that support for space exploration back home has waned, or that her country of birth no longer exists, or that a cult has arisen around their cosmic findings, only to dissolve once more by the next waking. But the moods of Earth have little bearing on their mission: to explore, to study, and to send their learnings home.

Carrying all the trademarks of her other beloved works, including brilliant writing, fantastic world-building and exceptional, diverse characters, Becky's first audiobook outside of the Wayfarers series is sure to capture the imagination of listeners all over the world.

This is the kind of story that we read science fiction for. It’s a story that asks big questions and gives very human answers.

If we take Star Trek as an example of large scale SF, this book is small-scale SF – in spite of its outside-our-solar-system travel itinerary. Where Trek moved through the galaxy at faster-than-light speed, ignored its prime directive of noninterference at pretty much every turn, and searched for “Class M” planets that could support human life as it is, Ariadne and the crew of the Merian do the exact opposite at pretty much every turn.

Starting from their very origins. The Earth that Ariadne and her crew leave in the late-21st century is recognizably a dystopian future of the world we know now. The coastlines are sinking, the economy is tanking, the skyscraper cities are on fire and climate change has turned worse and deadly. Governments are toppling, borders are redrawn at the drop of a hat and the situation is going to hell in a handcart at every turn.

But all is not hopeless, or at least not yet. There may be no longer be either a NASA or an International Space Station, but there is a worldwide volunteer effort to raise nickels and dimes and small amounts of every currency in large enough numbers to fund space exploration not just within this solar system but to the nearest exoplanets as well.

It’s a long journey – especially when limited to the speed of light. The crews of the tiny, self-sustaining ships of the Lawki expeditions are expected to go “out there” to a selection of likely planets, explore for months or years, and then move on to the next.

They are also expected to leave no footprints and to take only pictures, memories and tiny samples that will have as little effect as possible – ideally none – on the world they leave behind. The expeditions are not looking for worlds ideal for human life – actually the opposite. They are exploring purely for the science and are not looking for any “new civilizations” because they might disturb them with their observations.

They are also adapting themselves to each planet as they go. And the science and engineering of that are fascinating – as are the human consequences of those adaptations.

It’s not a one-way trip. The astronaut/explorers on the Merian, Ariadne, Elena, Jack and Chikondi are intended to return to Earth. But they will spend most of their journey – all of the time they are not planetside – in stasis. For them, the journey out there and back again will only take a few short years.

But on the Earth they leave behind, 80 years will pass. Their families and friends will be long dead by the time they return. Anything could happen while they are gone.

Escape Rating A+: To Be Taught, If Fortunate, turns out to be both a prophetic title and a thought-provoking look at big science wrapped up in a very human story.

I say prophetic, not because of the dystopian Earth it portrays, but because there’s a lesson in this story, and if we’re lucky, we get it before we reach that dystopia. Although that’s not the only lesson. There are plenty of marvelous little lessons along the way, about what it means to be human, how important it is to have purpose. How unimportant the package of “who we love” is vs. the importance that we love. How close a found family can be – even when it seems to be falling apart. That where we come from and who we stand for are more critical than mere self-fulfillment.

We experience the voyage of the Merian through the eyes of her engineer, Ariadne. Ariadne is not one of the science specialists, so her vision is not so tunnel-oriented as that of the rest of the crew; Elena the meteorologist, Jack the geologist and Chikondi the botanist. Ariadne’s job is to keep their little ship flying – and to pilot her when she is. She’s also an extra pair of hands for anyone who needs Petri dishes washed, or instruments checked.

But in a group of highly-specialized scientists, her generalist’s background gives her a perspective most like our own. She does see the forest for the trees – when there are trees – and doesn’t merely hunker down to count the rings.

We’re in Ariadne’s head every step of the way, so we get her hopes, her fears, her worries and her witty asides. We identify with her and her journey, both her excitement at the exploration and the depths of her despair when things go terribly, horribly wrong. And we see her come out the other side, scared and scarred by her experience.

One of the coolest bits of science in this story is the way that, instead of adapting the planets to meet human needs, the humans are adapted with reversible, changeable genetic engineering to the planets. Ariadne likens herself and her shipmates to butterflies in the way that they go into a chrysalis (their Torpor pods on the ship) and come out with completely different external attributes than they went in with. But, like the butterfly, they are always the same on the inside – except as their experiences change them.

The story of To Be Taught, If Fortunate, is both a big story and a small one. The Merian is exploring just a tiny portion of the great big galaxy, and they view that small bit through very human perspectives. The story is about the small ship, the tiny crew, and the little bit they see. But what they experience is huge – and the reader is right there with them every step, jump and squelch of the way.

And the question they leave us with at the end? It’s ginormous.

One thought on “Review: To Be Taught If Fortunate by Becky Chambers”