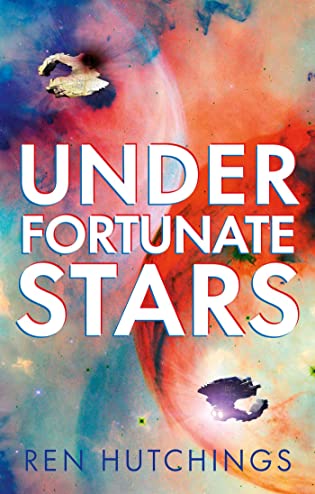 Fleeing the final days of the generations-long war with the alien Felen, smuggler Jereth Keeven's freighter the Jonah breaks down in a strange rift in deep space, with little chance of rescue—until they encounter the research vessel Gallion, which claims to be from 152 years in the future.
The Gallion's chief engineer Uma Ozakka has always been fascinated with the past, especially the tale of the Fortunate Five, who ended the war with the Felen. When the Gallion rescues a run-down junk freighter, Ozakka is shocked to recognize the Five's legendary ship—and the Five's famed leader, Eldric Leesongronski, among the crew.
But nothing else about Leesongronski and his crewmates seems to match up with the historical record. With their ships running out of power in the rift, more than the lives of both crews may be at stake.

When we first encounter the crew of the corporate-owned research ship, The Gallion, they are in the midst of the kind of dilemma that featured on just about every iteration of Star Trek. They’ve lost propulsion and communication, not flying blind because they’re not flying at all, all alone in the black of space.

The ship’s engineers, led by their chief Uma Ozakka, are desperately searching for the cause of their engines’ refusal to restart, reset or just re-anything. Something is suppressing their core power and the ship doesn’t have the equivalent of impulse engines – although their shuttles do.

But they are not alone. They pick up a distress signal from another, much smaller ship. And that’s where the adventure really begins.

The battered cargo ship they rescue, along with its motley-at-best crew, is a legend. But the legendary ship does not seem to contain its legendary crew. It’s also 152 years past its date with destiny. Or the Gallion is the same amount of time early for its normal anything.

Everyone aboard the Gallion believes it’s all a hoax. Buuuut engineer Uma knows all the history – along with most of the conspiracy theories – about the cargo ship Jonah and its crew. Because her dad was fascinated, and as a little girl she followed him everywhere.

And because the Jonah’s story was larger than life. After all, the Jonah and her crew, the Fortunate Five, came out of nowhere and negotiated a lasting peace between the human-centric Union and the alien Felen. A peace that came just in the nick of time to save both races.

Uma is fairly sure that the ship the Gallion has rescued is the real, historical Jonah. Which does not explain why the crew of the Jonah is only about half right at best. Nor does it even begin to explain the series of extremely fortunate coincidences that put the right people in the right place at the right time to save history.

It’s a story that proves that the heroes whose stories can NEVER be told are every bit as necessary as those whom history literally sings about.

Escape Rating A+: I loved Under Fortunate Stars, but then again, I also loved all the TV shows it pays homage to. OTOH, opinion in general seems to be a bit mixed depending on how the reader feels about what seems like an extremely long string of coincidences lining up perfectly to achieve the necessary outcome.

It does seem like an awful lot of surprisingly good luck after both ships have had the awfully bad luck to end up in this situation in the first place. But this is a story about causality and fulfilling the destiny that has been yours all along, and in the end turns into a Möbius strip of a story.

A lot of readers have compared the story to the Star Trek Next Gen episode “Yesterday’s Enterprise”, where a ship comes out of a temporal rift in front of Picard’s Enterprise and time suddenly slips sideways. The story of the episode is putting the correct timeline back into place – and it’s a great story.

But it didn’t have to be the Enterprise-D that met the mysterious ship from the temporal rift. A purist is going to come back at me about Tasha Yar, but she didn’t HAVE to go back. The only thing that HAD to happen to restore the timeline was for the Enterprise-C (because of course it was another Enterprise – it’s ALWAYS the Enterprise) to return to its own time to sacrifice itself for a Klingon colony to prevent the war that would otherwise have happened and that the Federation was about to lose.

Under Fortunate Stars is much more about what history records, what it hides, and how the sausage gets made to create heroes out of some very real and extremely flawed people. It’s also a deterministic story as everything that happens has to happen because it’s already happened, ad infinitum if very much not ad nauseum. The closing of this 152-year time loop also contains its opening.

What makes the story so much fun to read are not the ‘wibbly-wobbly, timey-wimey’ bits, but, of course, the characters. Uma Ozakka, the one who knows the history best, is expecting to meet bright, shiny heroes just like the images of the Fortunate Five that seem to be everywhere – including in multiple places aboard the Gallion. Who she meets, however, are people with some very dark pasts and some very big regrets, coming from a time when the aliens that have since made peace with humanity are a bitter enemy. They don’t want to become the ‘Fortunate Five’. Initially they want to take back any future technology they can pick up and destroy the hated, dreaded Felen.

The central characters of the whole thing turn out to be Jereth Keeven, the captain of the Jonah, who first of all isn’t the captain that history recorded and secondly is a con man on an epic scale. But he’s also Han Solo, complete with Han’s marshmallow heart under that tough, mercenary exterior. Eldric Leesongronski, the man who should be captain – at least according to history – is a mathematical genius filled with angst and far from the shining example of pretty much everything that Uma expects. Then there’s Uma herself, overqualified for her job, battling corporate bureaucracy as much as the temporal anomaly they have found themselves in, watching in real-time as her lifelong heroes display feet of clay up to their knees.

The way that the story bounces around in both time and point of view lets the reader see just how all the pieces get put together, leading to a finish that should be in the history books – and kinda is but also very much kinda isn’t. Just as it was. Just as it should be.

Under Fortunate Stars is the author’s debut novel, and it’s a surprise and a delight. I’m so very glad I read it, and I expect great things from her in her future work.

Reviewer’s Note: The popular comparison is between Under Fortunate Stars and ‘Yesterday’s Enterprise’, but IMHO the true comparison is between Under Fortunate Stars and the first three seasons of Babylon 5. There’s something set up in the PILOT of B5 that picks up weight and intention in the middle of the first season, at the end of the first season and the beginning of the second, and then finally pays off in the middle of the third season showing that all the history of the universe that we’ve seen so far was set up a millennia ago by someone who travels back in time with a stolen space station and a device that lets him change from a human into the founding leader and philosopher of another race entirely. Now that’s causality and a really BIG time loop!)

2 thoughts on “Review: Under Fortunate Stars by Ren Hutchings”