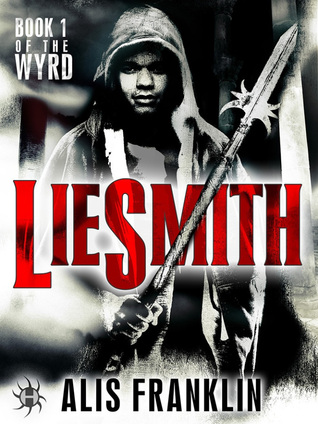 Working in low-level IT support for a company that’s the toast of the tech world, Sigmund Sussman finds himself content, if not particularly inspired. As compensation for telling people to restart their computer a few times a day, Sigmund earns enough disposable income to gorge on comics and has plenty of free time to devote to his gaming group.

Then in walks the new guy with the unpronounceable last name who immediately becomes IT’s most popular team member. Lain Laufeyjarson is charming and good-looking, with a story for any occasion; shy, awkward Sigmund is none of those things, which is why he finds it odd when Lain flirts with him. But Lain seems cool, even if he’s a little different—though Sigmund never suspects just how different he could be. After all, who would expect a Norse god to be doing server reboots?

As Sigmund gets to know his mysterious new boyfriend, fate—in the form of an ancient force known as the Wyrd—begins to reveal the threads that weave their lives together. Sigmund doesn’t have the first clue where this adventure will take him, but as Lain says, only fools mess with the Wyrd. Why? Because the Wyrd messes back.

For the first third of the book, I was afraid it was going to turn out to be a two-man grift. And it almost was, but not exactly the same two men and definitely not the same grift.

The above could be considered a spoiler for Neil Gaiman’s awesome American Gods, but it doesn’t begin to explain the complexity of the story in Liesmith.

However, the Liesmith in this title, and Low-Key Lyesmith in American Gods are the same Loki, for qualified definitions of “same” and possibly even of Loki.

Like I said, it gets complicated. For one thing, gods have erratic memories because they are made out of our myths and legends. When there are multiple versions of the same legend, the deity in the stories often has as much difficulty remembering exactly what he or she did or didn’t do as we do. Which is certainly a factor in the events in this book.

In myth, Loki was condemned for his part in the murder of the sun god Baldr to be chained to a rock with the entrails of one of his sons while a snake dripped poison into his eyes.. His wife Sigyn condemned herself to stand over him with a bowl to catch the poison. When he escapes, he is supposed to kill and be killed by other gods at Ragnarok, and then the world is supposed to end.

In this version, many people believe Loki cheated his fate, because, well, that’s what Loki does. In all of his manifestations, Loki is a trickster god. But Loki didn’t cheat, at least not then. Instead, the moment he escapes his loving wife conks him on the head and takes his place in the godly army, wearing his armor and pretending to be him.

Destiny is cheated, the world doesn’t end, and Loki wakes up to discover what his wife has done. That’s where things get interesting.

Because Loki sets up a huge dot.com in the middle of the Australian Outback, and sets himself up in his own exile. He’s had enough of gods and monsters and being both, and decides to just lay low and live out as many lifetimes as he can.

Then Sigmund walks into his life, and hell, also Hel, appear on earth, along with all the rest of the gods and monsters that Loki has spent the last several decades trying to avoid by submerging himself in the person of Travis Carter Hall, CEO of Lokabrenna Inc.

Baldr is back from the dead and out to get the god who connived at his death, and he doesn’t care how many civilians he has to destroy in order to make that happen. Geeky Sigmund discovers that he is the reincarnation of Loki’s lost wife Sigyn.

And Ragnarok is back on. The world is going to end after all, just so Baldr can punish his killer.

Except that nothing is as it seems. Or possibly ever was.

Escape Rating A-: A lot of Liesmith is urban fantasy of the horror school. If you’ve ever seen someone play Eternal Darkness: Sanity’s Requiem, the horror has that pulpy feel to it. It’s creepy and mucky and invades the “real” world in a way that almost breaks the fourth wall and certainly makes the characters wonder whether they have finally lost their grip on sanity. It grabs the reader enough that you get scared for them.

One of the other major threads of this story is Fate, generally referred to as the Wyrd in the book. The Wyrd seems to be the place that births gods and monsters and legends out of human beliefs and human stories. It also tries very hard to force the people stuck in the story to go down the same path every single iteration, where the characters, when they are aware, desperately attempt to find a way to create a happy, or at least a less awful, ending this time than they did the last time.

References to how this works are rather similar to the Mercedes Lackey’s stories of the Five Hundred Kingdoms. If you are meant to be Cinderella, the very universe itself will do its level best to force you to live out her story, even if you have no desire to be rescued by a prince, thank you very much. Fate can be a very cruel bitch, especially when you attempt to thwart her.

In the middle of all of this myth making and myth-breaking is a sweet and geeky romance between a man who used to be a god and a man who carries the soul of the god’s dead wife. Sigmund Sussman is an adorkable geek who works in IT support at Lokabrenna Inc. Loki falls so hard for the guy that he creates an entire new persona, Lain Laufeyjarson, just for the chance to get to know Sigmund better. And not just because Sigmund used to be Sigyn, but because there is something in the sweet, shy genius that draws the person Loki has become, as well as the god he used to be.

This part shouldn’t work. It’s a fascinating twist on the fated mate trope, and there is a huge difference in the power dynamic. For one thing, while it isn’t difficult to see what Sigmund sees in Loki, no matter which persona is at the fore, it is difficult at first to figure out what Loki sees in Sigmund besides Sigyn.

And while Sigmund seems a bit too naive about love, sex and even sometimes adulthood, it is his genuine goodness, and also his genuine dorkiness, that finally save the day. And the gods. And possibly even the future as we think we know it.

One thought on “Review: Liesmith by Alis Franklin”