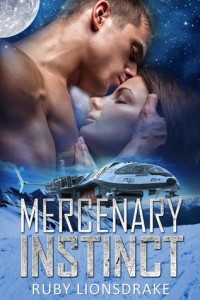 Skulking around in the ruins on a planet swarming with treasure hunters, slavers, and bounty hunters isn’t good for one’s health. But Ankari Markovich needs a few archaeological samples for her latest business venture, a venture that might prove lucrative enough to move her family off the impoverished planet where she grew up. Unfortunately, she has no sooner collected her samples than she’s captured by a band of brawny mercenaries. The captain might be handsome, but he’s intent on turning her over to some finance lord who has, for reasons unknown, put a bounty on her head, a ridiculously large one at that. If she can’t figure out a way to escape before she’s delivered to the lord’s home world, she could be forced into a life of indentured servitude—or worse.

Captain Viktor Mandrake doesn’t usually take on piddling bounty hunting gigs, but when his intelligence officer informs him of a criminal on a nearby planet, he decides it wouldn’t hurt to take a shuttle down to collect the woman. But Ankari Markovich is trouble from the start, nearly eluding his elite forces, then fighting and tricking his people left and right. He finds himself admiring her spirit, but according to her warrant, she’s a criminal. The safest thing is to keep her in the brig and ignore her until she can be handed off to the man who wants her.

But the situation grows more complicated when other bounty hunters show up, wanting to claim Ankari for themselves. Thanks to this woman, Viktor’s ship is in danger, his crew members are going missing, and he’s fighting enemies he never asked for in a jungle in the middle of a hurricane. He’s either going to strangle Ankari… or fall in love. Either scenario could get him killed.

Some of the reviews compare Mercenary Instinct to Firefly, and it’s a pretty fair starting point. Possibly an alternate universe Firefly. It’s not that Mal Reynolds couldn’t end up as cynical and universe-weary as Victor Mandrake (he pretty much did) but that I can’t imagine Mal creating or leading a successful mercenary company with 200+ people on its payroll. He wasn’t that organized, nor did he want to be in charge of quite that much. (Zoe, on the other hand, possibly yes)

But Mal would certainly have pulled the same stunt that Viktor does – taking a bounty for someone who seems criminal, only to change his mind when he discovers that the supposed criminals are every bit as much victims of intergalactic politics and chicanery as he is.

Upon which change of heart, trouble comes hunting him and his. So yes, Firefly.

Back to the actual book in hand (or on ereader), Mercenary Instinct. This is a combination unlikely love story and poke in the eye at intergalactic mercantile empires wrapped up in a fun package.

Viktor Mandrake is the Captain/Commander/Leader of Mandrake’s Company, a successful mercenary company with a fairly decent sized payroll and quite a bit of good space-faring equipment. He’s also a deserter from the GalCom Special Forces. GalCom isn’t a government or a planet, it’s a corporation. A universe spanning corporation that operates as a government. It’s also the entity that wiped out the entire population of Mandrake’s home planet because they didn’t want to join the company.

Only one other planet ever suffered the same fate, and for the same reason. GalCom also wiped Ankari Markovich’s home planet of Spero off the face of the universe. No other planet failed to heed those heart-breaking examples. But it does give Viktor something in common with Marcovich, the woman he is supposed to turn over to one of the more secretive Lords of Commerce on brutal but rather flimsy charges.

Ankari Markovich is the owner of a small biotech firm that plans to use ancient alien gut-bugs (try to say that three times fast) to make people healthier through gut-bug treatments. (As they are formally called, microbiota are real and research on changing or fixing them through injections from people with healthy microbiota is currently ongoing in our 21st century, which makes this plot not as far-fetched as it first appears)

Lord Felgard creates a “Most Wanted” poster for a very nasty crime using very shaky, almost “photoshopped” evidence so that he can put a very hefty bounty on Ankari and her two partners, Jamie and Lauren. All women in their early to mid-20s who have never even heard of Lord Felgard.

Their capture, in fact, the wanted posters themselves, come as a total surprise to Ankari and company. So much of a surprise that Viktor Mandrake starts to question the purpose of this bounty he has hunted. When Felgard double-crosses him, Viktor is certain there is more to this story than appears, in spite of, or perhaps because of, Ankari’s repeated escape attempts.

She may be trouble, but she isn’t a cold blooded killer. So what is she and why does Felgard want her in such a huge, expensive hurry?

And why can’t Viktor manage to resist letting her trouble all the way into his formerly regimented life?

Escape Rating B+: In spite of, or perhaps because of, its similarity to Firefly, Mercenary Instinct is a whole lot of fun. It has that same blend of space opera combined with rooting for the underdog that made Firefly so much fun.

In the science fiction side of this book’s roots, we have two themes that make for an interesting “man and woman against the evil corporation” plot work. The idea of an intergalactic corporation becoming the effective government is unfortunately all too easy to believe. After all, corporations now have rights to free speech in the U.S. Also, considering the current mess between Sony and North Korea, we have a corporation that either hacked, was hacked, and censored or was censored or refused to bow to censorship in the face of an actual government. The future where corporations are as big and powerful as countries may already be here.

And we’ve already talked about the gut-bugs. As funny as they sound, there’s real science hiding in those microbiota.

Markovich and her friends make an interesting bunch of would-be entrepreneurs. Lauren is the scientist who focuses on her work to the exclusion of everything else, including self-preservation. Jamie is a self-taught pilot and engineer desperate to escape her home planet, and Ankari is the brains and guts of the outfit. She’s the one who keeps going when it would be logical to stop trying. She rescues herself, over and over.

The double-cross by Felgard creates a dramatic tension as every mercenary company in the area swoops in to attempt to re-kidnap Ankari and her friends from Mandrake. The more odds that are stacked against them, the closer that Ankari and Viktor become.

I’ll confess to not being 100% sold on their romance. While it made sense that they banded together in the face of so much opposition and danger, it smacked a bit too much of insta-love to sell me. I could see insta-lust in this situation but not true love. YMMV.

Felgard was a bit of a cookie-cutter villain, if the cookies were made out of man-eating plants. He’s a bit bwahaha at the end, and seemed to exist mostly to create the situation rather than have real motives of his own. 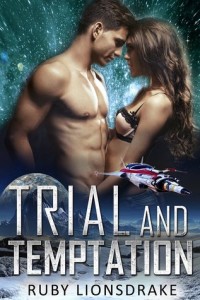 But I still had a ball with this book, and have the entire series so far on my iPad waiting for the next time I need a treat. Trial and Temptation is already tempting me.

Reviewer’s note: Ruby Lionsdrake is possibly one of the cheesiest pen-names I have ever giggled over. But when I discoverd that Ruby is actually Lindsay Buroker, author of the marvelous fantasy/steampunk Emperor’s Edge series, I couldn’t resist seeing how she did in a new genre. I’m very glad I did.