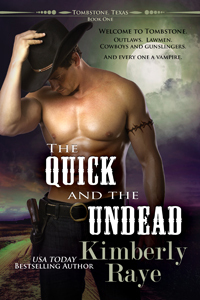 Welcome to Tombstone, Texas, where anything is possible, even your wildest fantasy. Once a haven to outlaws, Tombstone is now a tourist town that gives travelers a taste of the old West. What visitors don’t realize, however, is that the super-hot cowboys, gunslingers, and lawmen walking the streets aren’t actors—they’re originals. These ancient vampires claimed Tombstone two centuries ago.

So step right up, folks, and book your trip today! The outlaws of Tombstone will be waiting . . .

Boone isn’t just the law in Tombstone, Texas. He’s also an ancient vampire and the target of a crazed killer. He certainly doesn’t have time for romance. But a temporary fling? Now that he can handle.

Unfortunately, their first night together ends in disaster when Riley witnesses a murder. And to protect her, Boone forces her into hiding. Only her “captivity” ends up becoming the realization of her wildest, most carnal fantasies. Still, Riley’s not going to fall for him, at least that’s what she tells herself.

But as she gets to know him—the man and the vampire—she starts to wonder if she can hold out . . .

The town of Tombstone that you’re probably thinking of, the one with the O.K. Corral? That’s in Arizona. Not that I’m not pretty sure that the name Tombstone isn’t designed to blend your memories of that Tombstone with this Tombstone. Using such a familiar name in popular Old West legends brings a whole lot of atmosphere to this new one, and it makes perfect sense both from the author’s standpoint and in the context of the story.

In this new Tombstone, some old gunfighters are bringing in tourists for a taste of the real West. The one that they lived in 150 years ago, when they were all feared outlaws. Becoming vampires back in the day made them faster, stronger and of course, virtually immortal.

There were 10 of them, but in this modern day, there are only nine. Nine men and women who remember the west as it was, because they lived it. They should have scattered to the four winds, but in this particular version of vampirism, the vampires have to return to the place where they were turned on the anniversary of that life-changing event. For all of them, that place is Tombstone.

In the 21st century, they have become entrepreneurs of an expensive and exclusive Wild West resort (Think of Westwood without the rampaging androids). The Tombstone Ten (minus one) need the money from the resort to buy the land they need for their annual pilgrimages – and just plain because Tombstone is home and they want to preserve it.

The Quick and the Undead, while it sets up the scenario of Tombstone and gives us peeks at the previous lives of the vampires who run the show, is also a romance between a travel blogger and a man she thinks is just an actor plying the part of Sheriff Boone Taggart. It’s also the setup of a long-term suspense plot about the certainty that other vampires know who they are and where they are, and that the old vampire who made them is on his way back with unknown and probably unwelcome intentions for the gang he created and the town they made.

Back to that travel blogger, Riley Davenport, and Boone. Riley has been on the run for three years from an abusive ex. Her travel blog keeps her moving, and therefore difficult to track. She posts on a time delay, so by the time her posts on location X are being run, she’s already at location Y or even Z. She lives out of suitcase but it makes her feel safe. Also tired.

Boone and his vampire friends (and enemies) upset all of Riley’s carefully made plans. Tombstone offers as real an Old West experience as they can make, so there is no electricity and no internet. Which doesn’t mean that the vampires running the show don’t have all the modern technology available to track their very modern business, but that tech is NOT available to the guests.

Riley has avoided relationships while she’s been on the run. She’s lonely but afraid of finding herself attracted to another alpha male who will take over her life and kill her personality if not her actual self. While she is attracted to Boone from the moment she sees him, it takes her a lot of story to figure out that while he may be as alpha as they come, he doesn’t want to control her.

Especially since his drive to keep her safe from a crazed killer vampire is to lock her up in a cave until things are safe.

Escape Rating B-: I love the setup of the town and the series, but I’m not so certain about the romance between Riley and Boone.

The idea that they might experience a whole lot of insta-lust and decide on a short-term fling for the time she’s in Tombstone makes sense. That she decides she really loves him while she is trapped in a cave, even if it is definitely for her own safety, smacks a bit of Stockholm Syndrome. That she calls herself on it doesn’t make it any less true.

Riley’s ex is also a bit of a failed ‘Chekhov’s Gun’. She has lived her entire life for the last three years in rightful fear of this bastard, but he’s neither the big baddie nor even the little baddie in this story. He’s swept out with the trash in a brief mention at the end that he’s in prison for battering some other woman. (The irony is that this feels ‘real’ in a real world sense while at the same time being disappointing in a story sense.)

The suspense angles of the story, the question about who is after the vampires and why, worked well both as suspense and as a way of illuminating a whole lot more about Boone’s character and his past. The way that his closure gets delivered worked well for me.

I will say that the all-inclusive tourist town run by vampires setup reminded me a lot of Nina Bangs’ Castle of Dark Dreams series. Bang’s series is lighter and Raye’s is spookier/darker, but the idea of vampires creating fantasies for tourist consumption is fun either way.

3 thoughts on “Review: The Quick and the Undead by Kimberly Raye”