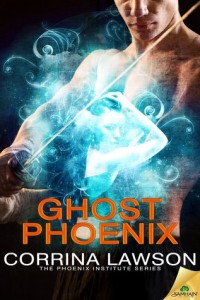 Richard Plantagenet, self-exiled prince of an immortal court, is content living the uncomplicated life of a California surfer. Until his brother’s sudden death and his Queen’s wasting illness wrest him from his ocean-side solitude for one last quest.

The Queen needs a cure. To get it, Richard needs assistance from someone with a singular—and slightly illegal—talent.

As the latest of a long line of ghost-walkers, Marian Doyle can, literally, walk through walls—bringing objects with her. Her gift comes in handy for her family’s shady antiquities business, but Marian’s had it with breaking the law. She wants a life of her own choosing.

Instead, she gets Richard.

Their mission seems simple: Find the body of Gregori Rasputin and procure a small sample of his DNA. But when they discover the Mad Monk of Russia is very much alive, the prince and the phantom must form a bond to battle a man who desires to remake the world in fire.

I read The Phoenix Institute series all in one giant binge, and I’ll admit that Ghost Phoenix is the point where it almost jumped the shark. But the romance between the hero and heroine was so much delicious fun that it pretty much jumped back. 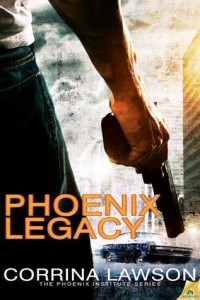 The evil dude in the previous book, Phoenix Legacy, went by the name Edward P. Genet V. At the end of the story we discover that his real name is Edward Plantagenet, briefly King Edward V of England. Back in the late 1400s.

If the name rings any bells at all, it’s because Edward V was also one of the famous Princes in the Tower. Shakespeare claimed that Edward and his brother Richard were killed by their uncle, the recently discovered Richard III. (Contrarians say that the Princes were murdered by their sister’s husband, King Henry VII. We may never know)

But it turns out that the people that the Phoenix Institute has discovered are not the only folks out there with special gifts. The Plantagenets have a strain of self-healing in their DNA, making some of them effectively immortal. Edward was one such, as was his brother Richard. In this scenario, they weren’t killed after all – they disappeared into the shadow court of their immortal queen, who turns out to be Eleanor of Aquitaine.

Eleanor is wasting away of some unknown malady that is preventing her from accessing her healing talents. Edward’s pursuit of Delilah and Drake’s genetically engineered baby was all part of his plan to create someone with the talent to heal others. However, messing with Drake’s family was a guaranteed way of getting killed. A sword through the heart will kill anyone. Even a self-healer can’t heal around a big honking piece of sharp metal in a truly vital organ.

Richard is forced back to court by his duty to his brother, and to his queen. He never approved of Edward’s methods, but now he has to find out what truly happened to his brother, and find a cure for the queen. Since Drake and Delilah’s baby is now out of reach, the court has discovered another possible method – studying the corpse of the mad Russian monk Rasputin, who was also had the power to heal others – as well as being a charismatic and nuttier than a fruitcake. Legend has it that Rasputin was poisoned, shot and drowned, so it is assumed that one or all of those methods overcame his self-healing ability.

Richard thinks he’s looking for a valuable corpse. So he hires Doyle Antiquities, especially Marian Doyle, to dig up (if necessary literally) the body of Rasputin. The Doyle family is known for possessing a rare psychic gift – the ability to turn to mist and go through walls. Marian is the only member of the family in this generation to possess the gift – as well as a talent for researching where lost treasures might be found.

Richard discovers that Marian is the most pleasantly surprising person he has met in centuries. She is intelligent, beautiful and talented, and always manages to do the unexpected. As they hunt what they think is an artifact, they discover that in spite of the centuries, they belong together. If they can survive the mess they have gotten themselves into.

Escape Rating B+: The combination of the immortal Plantagenet court with Rasputin went really too close to the “believe three impossible things before breakfast” idea. In a world where multiple people have some kind of psychic/telekinetic talent without having had the equivalent of a mutated spider bite them in a lab, it is logical that there would be others with some talent.

There are so many stories about Rasputin, that it isn’t a stretch to believe he had some real power. He and his followers certainly thought he did. But adding the Plantagenet court into the mix almost went over the top.

But Richard Plantagenet is surprisingly empathetic as the surfer dude who could be king. He has rejected much of the isolation of the court and become a surfer in California. He may love the queen, but his attachment is to contemporary life. Watching him straddle both worlds makes him more human. He is still an autocrat at times, but he also knows how to value the short-lived human lives around him – and he knows there are lines that can’t be crossed, a lesson his brother never learned.

Richard meets with the Institute and Philip Drake, yet everyone walks away with their organs intact. He mourns his brother, but acknowledges that Drake’s actions were more than justified. He would protect himself and his to that same extreme – he can’t fault Drake for doing the same.

However, it is Richard’s relationship with Marian that grounds him and makes him human enough to feel for. He needs to win her love and approval, and she keeps him on the relatively human straight and narrow.

It is also her talents that discover the truth about the Queen’s illness. He needs her, and she needs him to boost her confidence so she can break away from the family that uses her and takes her for granted. In the early scenes, where Richard puts her overbearing grandfather in his place, that makes the reader first see him as “one of us” and not “one of them”..

One thought on “Review: Ghost Phoenix by Corrina Lawson”