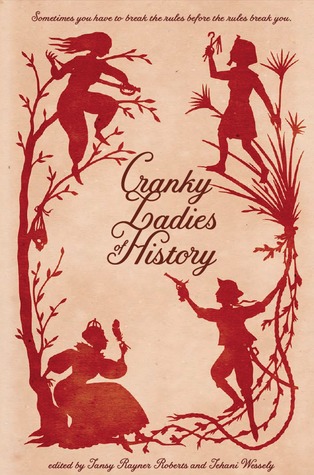 Throughout history, women from all walks of life have had good reason to be cranky. Some of our most memorable historical figures were outspoken, dramatic, brave, feisty, rebellious and downright ornery.

Cranky Ladies of History is a celebration of 22 women who challenged conventional wisdom about appropriate female behaviour, from the ancient world all the way through to the twentieth century. Some of our protagonists are infamous and iconic, while others have been all but forgotten under the heavy weight of history.

I think this book is titled Cranky Ladies of History because “Angry Women of History” doesn’t put the same smile on your face, the one that would open wallets for a successful Pozible crowdfunding campaign. (I would have helped fund the thing if I had heard about it sooner. But I didn’t. So I bought the book instead.)

March is Women’s History Month, which makes this a perfect time to review a book that covers the gamut of women’s history, from the point of view of women who were angry enough to buck the rules that are supposed to keep women high up on a pedestal where they can’t get shit done.

The historical women in these stories kicked ass and took names. Sometimes literally, sometimes just figuratively. They are individually and collectively awesome, even if they are not all familiar.

Cranky Ladies of History is a short story collection built around this central theme – stories of women who did not just sit back quietly and bear whatever got thrown at them. Usually the throwing was done by men, but not always.

Like most short story collections, it isn’t all of uniform quality or interest to any reader, including this one. I loved the theme, and at least liked most of the stories. There were a couple that were far enough outside of my own cultural bailiwick that I would have loved a longer treatment of the person – I just didn’t know enough to feel like I got all of the context, but there were only a couple of stories that really didn’t engage me.

The collection is bookended by two stories about the daughters of Henry VIII, both of whom had more than enough reasons to be angry at their father, his court, the machinations of politics and pretty much everything else.

Queenside by Liz Barr is about Mary, later Queen Mary I, also sometimes known as Bloody Mary for her religious purges. This little gem takes place much earlier, where she manages to give a right proper comeuppance to the woman who stole her mother’s throne and her life. As Anne Boleyn is on her way down, Mary puts her in her place and rises above her, all at the same time. It was fascinating to see the exchange from Mary’s perspective, because history has seldom been kind to her.

The last story is Glorious by Faith Mudge, and it is Elizabeth I’s point of view. Elizabeth, later called Gloriana, was at one of the lowest points in her life, when her sister condemned her to the Tower because of a rebellion that was fomented in her name. The question was always whether or not Elizabeth had been an active participant in the treason. This story takes place in 1554, and we see Elizabeth’s private thoughts as she prays to live long enough to take the throne. She is frightened and resolute, while calculating the best way to save herself and her supporters.

Two of my other favorite stories also take place in England, or are at least about English nobility. The Company of Women by Garth Nix is a marvelous and fantastic reinterpretation of the Lady Godiva story. Little Battles by L.M. Myles gives us the indomitable Eleanor of Aquitaine late in her incredible life, giving lessons in queenship to her granddaughter on their way to the younger woman’s betrothal to the King of France. Eleanor reflects on her life, her journeys, and most especially, her part in the war between her husband and her sons.

The Pasha, the Girl and the Dagger by Havva Murat is a wonderful story of a woman warrior who has to navigate the games within games of her father’s court. It was great to see a story where the female wins everything, including her father’s approval, by defying the stereotypes that define women’s roles in her society.

All the women features in this collection defy stereotypes, and often defy their society. They are not all heroines – Elizabeth Bathory is known to history as one of the first serial killers. Even those women in this collection who are mostly fable are totally fascinating.

Escape Rating A-: All the stores in this collection were at least interesting, and I can’t always say that about a short story collection. Bathory’s story gave me chills, but then, it was supposed to. 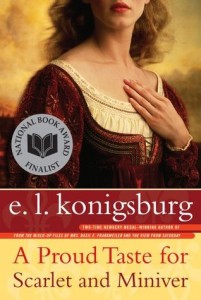 I did mostly love the English history stories the best, but that’s a personal thing – I read a lot of English history in high school and college, and still find it interesting. Eleanor of Aquitaine was an incredible woman. I still fondly remember reading A Proud Taste for Scarlet and Miniver eons ago.

But the stories overall show the power of women, not just individually but also in concert (The Company of Women does this well). So often, we stand together or we fall together. And we fall separately.

It says something about society that the phrase “Cranky Ladies” gets a smile and a laugh, but “Angry Women” is a turn off, and of a considerably larger scale than “Angry Men”. It is still a truth that men are allowed to get angry, where women’s anger is denigrated or dismissed outright.

On the other hand, as Laurel Thatcher Ulrich so succintly said in 1976, “Well-behaved women seldom make history.” The stories in this collection all feature women who did not behave well according to the rules of their society, but they all got shit done.

Reviewer’s Note: if you are interested in how this collection came to be, the creators did a terrific “Big Idea” post on John Scalzi’s blog Whatever earlier this month.