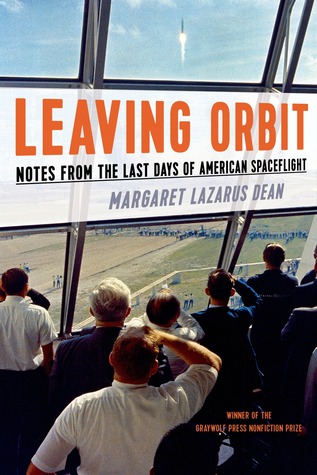 In the 1960s, humans took their first steps away from Earth, and for a time our possibilities in space seemed endless. But in a time of austerity and in the wake of high-profile disasters like Challenger, that dream has ended. In early 2011, Margaret Lazarus Dean traveled to Cape Canaveral for NASA’s last three space shuttle launches in order to bear witness to the end of an era. With Dean as our guide to Florida’s Space Coast and to the history of NASA, Leaving Orbit takes the measure of what American spaceflight has achieved while reckoning with its earlier witnesses, such as Norman Mailer, Tom Wolfe, and Oriana Fallaci. Along the way, Dean meets NASA workers, astronauts, and space fans, gathering possible answers to the question: What does it mean that a spacefaring nation won’t be going to space anymore?

There’s a comment often made about sad posts on Facebook or Twitter, that there is “dust in the post” that made the reader’s eyes water. For this reader, there was dust, perhaps space dust, in this entire book.

But then, I’m at least a borderline member of the group that the author refers to as “space people”. I wish I had been there. I wish I had been able to go. I envy the author her chance to see the last shuttle launches in person, and I wish with all my heart that they had not been the last, as I wrote in my own post at the end of the Shuttle Program, Dreams of Space.

Like the author of Leaving Orbit, I also cried while touring the Kennedy Space Center. It wasn’t until I had nearly finished the tour that I figured out that my tears were for me, because I would never get to take that big ride for myself.

I think a lot of us who were raised on Star Trek probably had some of those same dreams.

But this book, Leaving Orbit, is the author’s personal journey of witnessing the end of the Shuttle program, and trying to figure out what it means, not just for herself, but also for America, that we no longer have a space transport where we can send our astronauts to continue our exploration of space.

We stop at the International Space Station, and we get there on other countries’ ships. We were the first and only country to land on the moon, but we no longer have the infrastructure to go back. And if we’re planning to go to Mars or anywhere else, those plans are still space dust in dreamers’ eyes. 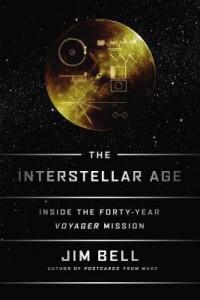 In Jim Bell’s The Interstellar Age (review), he writes of the current space robot program, and there is joy and enthusiasm in his work, and the work of everyone in the program. People have “gotten aboard” the journeys of these cute, seemingly plucky, and fortunately for NASA relatively cheap, robots. And they do good science.

I’m having a difficult time reviewing this book as a book. As I read it, the story felt very personal to the author. While she was witnessing the events surrounding the final three shuttle launches, her feelings of triumph at the successful launches and grief that they were over was very much in evidence.

She is very conscious of bearing witness to events that mark an ending of the dreams of so many people, including herself. I felt her sadness, and it echoed my own. She finds herself caught between two extremes, giddy excitement that she gets to walk in the footsteps of so many authors who have written about the space program, that she gets to see so many places that very few people get to see, and at the same time her continual sorrow that this is the last time that these places will be used for the purpose for which they were built.

Because this was such a personal journey for her, it became a personal one for me, too.

Reality Rating A-: The author does a great job of interspersing a condensed history of American space flight with her observations of its end. By the time we finish, we see where we came from, how we got here, and also the author’s observations of why it hurts so much.

Some readers will think that the author injects an awful lot of herself into this book that purports to be about the Shuttle program. I found it gratifying that her personal feelings echoed so much of what I feel, and what I would have felt had I stood beside her.

The question that the author keeps asking herself and others, “What does it mean that we went to space for fifty years and then decided not to anymore?” is one that is never completely answered. It only produces more questions.

One of those questions is about future programs that are still on the drawing board. While those nascent plans to revive the program do exist, they are contingent on funding by future congresses and future administrations, and NASA’s track record in such cases is that the funding is scaled back or never appears at all. Apollo was unique, and unless those circumstances arise again, the dreams of space remain curtailed and under- or un-funded.

But in conclusion, the author writes that “The story of American spaceflight is a story with many endings.” This ending feels final and it’s the one that sticks in the heart. Or at least, in my heart.