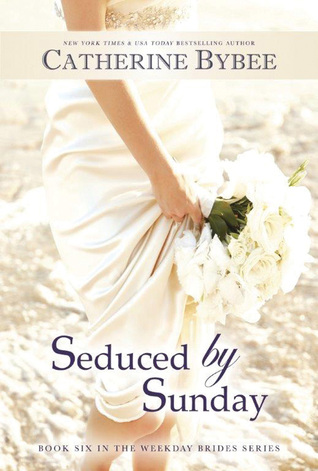 She swore off love forever…but he just might change her mind.

Meg Rosenthal: Matchmaker by day, realist by night, Meg is not about to get swept away by a charming, darkly handsome businessman in a designer suit. She’s come to a beautiful secluded resort to evaluate the private island’s potential for her agency, not to ogle its owner. But there’s something about the magnetic man that’s hard to resist, even for a woman who refuses to fall in love.

Valentino Masini: A successful and drop-dead sexy businessman, Valentino is used to having the finer things in life. Yet he’s never wanted someone the way he wants Meg, who’s stirring up a hurricane of trouble in his heart. But just as he decides to convince her to stay, someone else decides it might be time to get Meg off the island…permanently.

The romance in Seduced by Sunday is marvelously sweet and super hot, but what got me in the end was the intense feeling of danger that is faced by all the characters involved in this story. There were a lot of times where I was reluctant to read further, not because I wasn’t enjoying the story (because I absolutely was) but because I was so afraid for the characters that I didn’t want to see anything else bad happen to them.

Another very strong factor in this story is the power of friendship. Not just women’s friendships, although that is in full force and is the ultimate saving grace for several of the characters, but the strength and importance of true friendship, particularly in very stressful lives.

And last but not least, there is an element about the healing and saving power of being self-sufficient and self-reliant. It feels as if all of the women in this series have been through their own personal hells, have rescued one another by giving each one an important and fulfilling job, and then letting romance happen later as the icing on an already quite satisfying cake.

No one seems to get rescued by Prince Charming. It looks like occasionally they rescue each other, or the woman does the rescuing. I love that.

I’m saying all this even though I haven’t read the earlier books in this series. I loved Seduced by Sunday, and was on the virtual edge of my seat during some of the nastier events, but the sense that these people are all there for each other through thick and thin, because they’ve already been through hell together, shines strongly through the story even though there are only hints of the previous books. Those hints are more than enough to carry the reader along into their world.

Which doesn’t mean I don’t now have a yen to read the rest of the series, because I most certainly do. These women (and the men who deserve them) are awesome.

When Seduced by Sunday begins, the skullduggery that Meg Rosenthal hopes not to find at Valentino Masini’s modern-day version of Fantasy Island is not the evil she eventually uncovers. Val turns out to be one of the good guys, but he has been hoodwinked, and so has most of his family.

Meg is currently running the Alliance, an agency that very, very discreetly arranges contract marriages for people who need to fake being married in a way that no one can discover. Discretion isn’t just the Alliance’s middle name, it’s their first and last names too. These contacts are not about sex, they are about appearances. At the end of the year, the women walk away with a divorce and a sizable settlement. No one is supposed to fall in love with their contractual spouse-in-name-only, but occasionally they do.

Val Masini owns a private island resort that just might be secure enough for the Alliance to send their fake married couples on their equally fake honeymoons. Meg decides to investigate by taking her friend, and former client, Michael Wolfe to the island. They are not a couple, and Michael is gay. No one would care, except that Michael is a very successful leading man in Hollywood, and no one is quite sure whether Hollywood is ready to embrace a gay romantic/action-hero.

So the test is to see whether Val’s security is tight enough that no one is able to find them on the island, and that no one comments on their non-relationship. Meg doesn’t count on her attempted subterfuge being severely tested by her slightly officious host. But behind Val’s anal-retentive desire for security is a man who has been too buttoned up for far too long, and Meg has him breaking all too many of his own rules.

It all starts going sideways when Val discovers he has a security breach. What he can’t see, although the reader will figure it out long before he does, is that what he really has is a security blind spot. One that nearly gets both his sister Gabi and Meg, the woman he has come to love, nearly killed. That it also nearly ruins his entire business stops mattering the instant he is certain what went wrong. Which doesn’t help him save them. It’s all up to Meg to save the day – with a little help from a lot of her friends.

Escape Rating A-: I did figure out who was responsible for the security breach relatively early on. But the reason was way more convoluted, and much more dangerous, than I (or any of the characters) suspected.

I loved Meg as the heroine. She is tough and sassy and takes no nonsense from anyone, including Val. In spite of her need to monitor her own health due to her asthma attacks, she never sits on the sidelines and waits for stuff to happen. Her job with the Alliance is to investigate people and their potential weak spots, and she brings all of her skill and attention to bear the minute she starts thinking that there’s a problem at the resort.

Her “spidey-senses” tingle the minute she meets Val’s sister Gabi’s fiance. There’s something not quite right about Adolfo, even if she can’t pinpoint anything specific. He seems slimy, and Meg knows slimy is as slimy does. That Gabi and Val’s mother can’t stand the man is just another reason to dig and dig deep.

Meg is a force of nature. Once she gets rolling, all that the others can do it come along on the journey and help contain the fallout. She doesn’t just drag Val along (not that he isn’t willing to be dragged) but Michael is right in there digging beside her, even though he knows that the hornet’s nest they are stirring up will unmask all of his secrets. His friendship with Meg is more important than staying in the closet, no matter what the cost.

That all of Meg’s very influential friends pitch in and help when the true evil starts being uncovered is a testament to how much these people care about each other. It really shows. 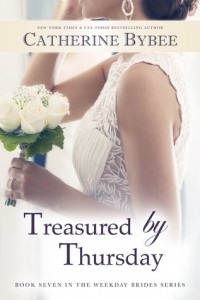 I like Val, but he just doesn’t come off as strong as Meg. This is her show, and it’s a winner. So is she.

In the end, it is really Meg who rescues poor Gabi. Not just by sweeping in with a virtual army, but by befriending her and giving her hope and purpose at a point in her life when everything has been stripped away.

Gabi’s story is next in Treasured by Thursday, and I can’t wait.

There are two separate giveaways available. The first one is for a Kindle and several gift cards. The second is for 3 ebook copies of Seduced by Sunday. Enter both for more chances to win!

5 thoughts on “Review: Seduced by Sunday by Catherine Bybee + Giveaway”