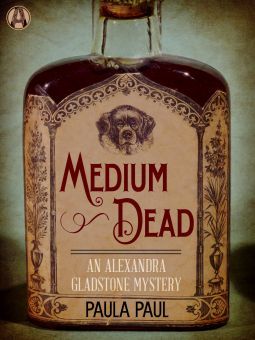 Under Victoria’s reign, women are barred from calling themselves physicians, but that hasn’t stopped Alexandra Gladstone. As the first female doctor in Newton-upon-Sea, she spends her days tending sick villagers in the practice she inherited from her father, with her loyal and sometimes overprotective dog, Zack, by her side.

After the corpse of village spiritualist Alvina Elwold is discovered aboveground at a church boneyard, wild rumors circulate through the charming seaside village, including one implicating a certain regal guest lodging nearby. Tales of the dead Alvina hobnobbing with spirits and hexing her enemies are even more outlandish—but as a woman of science and reason, Alexandra has no doubt that a murderer made of flesh and blood is on the loose.

Finding out the truth means sorting through a deluge of ghostly visitors, royal sightings, and shifty suspects. At least her attentive and handsome friend Nicholas Forsyth, Lord Dunsford, has come to her aid. Alexandra will need all the help she can get, because she’s stumbled upon dangerous secrets—while provoking a deadly adversary who wants to keep them buried.

Medium Dead is the 4th book in Paula Paul’s Dr. Alexandra Gladstone series. I can say with absolutely assuredness that it is not necessary to read the other books in this series to enjoy Medium Dead, because I somehow totally missed that there were earlier books, but I very much enjoyed this one.

I could tell that all the characters had history together, but the author did a good job of giving readers enough background to ensure that this story was an interesting and enjoyable one.

Of course, as soon as I discovered the truth, I went and bought the first three books. I liked this one so much that I wanted to read more of Alexandra’s adventures.

Alexandra Gladstone is an unconventional heroine, but she is in a profession that seems to lend itself to investigating murders. Alexa is a doctor. Admittedly, in the Victorian era women were not supposed to be or allowed to be doctors, but Alexa, and the village of Newton-on-Sea that she serves, have decided not to care.

Alexa inherited her practice from her father. The late Dr. Gladstone also trained his daughter in medicine. She’s all the doctor that her remote village has – or needs. By this point in her history, everyone has come to accept her. She’s good at her job, and she’s the only doctor for a long ways around.

As is usual in small-town series, Alexa has gathered a little group of irregulars around her, people who help (and sometimes hinder) her unofficial investigations. Her nurse Nancy, the two boys who do chores around her house, Rob and Artie, and most especially Nicholas Forsyth, a London barrister who unexpectedly inherited the local title and is now the Earl of Dunsford, to both his delight and dismay.

This case involves Nicholas’ household more directly than is usual. His snobbish mother has come to the estate with a very special and very secretive guest. The intent is that Queen Victoria’s visit to the remote village should be a secret, but when the medium that the Queen consults turns up dead, it turns out that everyone in the village either already knows that Her Royal Highness is at Dunsford, or they find out pretty quickly.

There are secrets within secrets. Someone says they saw the Queen scrabbling around the cemetery where the late medium was found dead. The local Constable saw Nicholas mother searching that same ground for some equally unknown reason.

A village man confesses to the murder, but it is obvious that he didn’t commit it. Alexandra, who also unofficially serves as coroner, finds herself in the middle of a case that has two suspects who can’t be named, and one victim that all too many people believe consorted with evil spirits, or at least could raise the dead.

None of the possible clues make much sense. And nothing is as it seems.

Escape Rating A-: I had no idea whodunnit at the end, and I didn’t even care. I got completely wrapped up in Alexandra’s world and the people who inhabit it, so much so that I bought the other three books in the series so that I can go back and visit them again soon.

Alexa carries the story, and it was easy to like her and empathize with her. She is a career woman at a time when women were not supposed to have careers, and she values her independence and the respect she receives as a doctor. At the same time, she has become very good at maneuvering her way around people who simply cannot accept that she is a trained physician, and she gets her job done anyway, even treating the extremely reluctant.

She also has a great way of using her position to get her into places that she otherwise would not be able to go. Busybodies get shown the door, but doctors get in to treat their patients, even when the patients don’t want to be treated.

Because so much of this case involves secrets within Dunsford House very ineffectively kept by a titled Lady, Alexa needs to use her professional ability to treat the ill older woman as a way of getting into the house to discover where the secrets are being kept.

That Alexa is much better at managing Nicholas’ spoiled mother than Nicholas is does not bode well for the romance he wishes would blossom between them, but I suspect that is an entirely other story.

The kickoff to the mystery, Queen Victoria’s visit to the village to consult a medium, is based in history. Victoria never stopped mourning Prince Albert, and the rise of spiritualism in Britain and America can be traced to her desire to communicate to her late husband.

And, of course, a lot of the mediums were exposed as charlatans. While the truth of this dead medium’s talents are never ascertained, a part of this mystery does revolve around fraudulent seances.

Including the one conducted by Alexa’s nurse along with a couple of the more credulous women in the community. The scene of Alexa, along with Nicholas and the two boys, sneaking around her own house to spy on a seance that none of them believe in was hilarious. It also showed the depths of the relationships that Alexa has with all of her friends and coworkers.

And there are more than a few scenes where Alexa’s dog Zack steals the show.

This tour includes a Rafflecopter giveaway for a $25 eGift card to the eBook Retailer of the winner’s choice + an eBook copy of MEDIUM DEAD.