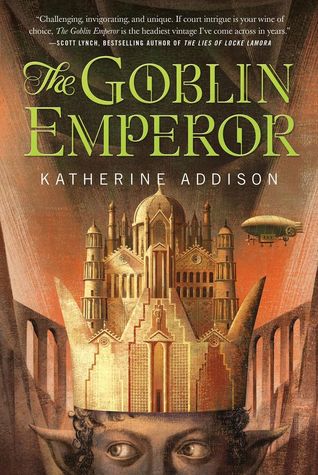 The youngest, half-goblin son of the Emperor has lived his entire life in exile, distant from the Imperial Court and the deadly intrigue that suffuses it. But when his father and three sons in line for the throne are killed in an “accident,” he has no choice but to take his place as the only surviving rightful heir.

Entirely unschooled in the art of court politics, he has no friends, no advisors, and the sure knowledge that whoever assassinated his father and brothers could make an attempt on his life at any moment.

Surrounded by sycophants eager to curry favor with the naïve new emperor, and overwhelmed by the burdens of his new life, he can trust nobody. Amid the swirl of plots to depose him, offers of arranged marriages, and the specter of the unknown conspirators who lurk in the shadows, he must quickly adjust to life as the Goblin Emperor. All the while, he is alone, and trying to find even a single friend… and hoping for the possibility of romance, yet also vigilant against the unseen enemies that threaten him, lest he lose his throne – or his life.

I just want to squee. I absolutely adored this from beginning to end. My only regret is that it’s finished. The Goblin Emperor gave me a terrible book hangover and I did not want to leave this world.

As June is Audiobook Month, it is fitting that I started out listening to this book on a long trip, and was utterly absorbed from the very beginning. However, as wonderful as the audio was, it just didn’t go fast enough. A little past halfway, I dove into the ebook and raced to the end.

The story is one that has been told before. The emperor is dead, long live the emperor. Except that this story is not nearly that straightforward.

The Emperor of the Elves is murdered when the airship containing himself and his three oldest sons is sabotaged. He has two remaining heirs; his oldest son’s son, a boy of 14, and his disregarded and disrespected fourth son, a young man of 18. The Empire has a very poor history when it comes to minor Emperors and their regencies (no surprise there), so Maia suddenly finds himself the new Emperor. At 18, Maia is barely old enough that he will not require a regency. Whether he’s experienced enough to do the job is a completely different question.

He has no training for the job. He was raised in exile, not because he did anything wrong, but because his father hated his mother. Not that she did anything wrong either, but the previous emperor was a man who could not bear to admit to his mistakes – and marrying the Goblin princess while he was still mourning the loss of his beloved third empress and her unborn child was definitely a mistake.

A mistake for which Maia pays the price, over and over.

While somewhat knowledgeable about court etiquette and logic, at least in theory, Maia has no experience of life in the cutthroat political atmosphere of the imperial court, or even of life among the nobility. He can’t dance, he can’t ride a horse, and he has no clue how to make small talk or write meaningless letters.

Even more embarrassing, he has spent the last ten years of his life being beaten and bullied by the man who was supposed to be his guardian. Maia’s first lessons are in “emperoring up” and presenting an impassive expression in the face of everyone who tries to take advantage of his inexperience – including his former guardian.

Maia is on his own. He has had no teachers, and he has no guide to the strange new world in which he finds himself both a king and a pawn. Everyone who surrounds him has heard tales that he is unnatural, dim-witted or crippled in some way, when in fact the only things that hold him back are his youth and his ignorance. Ignorance is curable, and Maia struggles to overcome it while continuously dodging attempts on his power and his life.

Maia sometimes questions whether he will manage to outlive his youth. The reader does too.

And he never loses sight of the fact that he is only on the throne because someone sabotaged an entire ship full of people in order to take down the emperor. And who may also want to take Maia down, if one of his courtiers or relatives doesn’t get there first.

Escape Rating A+: I absolutely loved this one, which makes it difficult to review it properly. Or even improperly. As The Goblin Emperor is one of this year’s Hugo nominees for Best Novel, I am also immensely grateful that it is a real choice. I’m having a difficult time deciding between this and Ancillary Sword (reviewed here). I’m looking forward to reading Three-Body Problem by Cixin Liu to see if it’s a real horse race.

Back to The Goblin Emperor. The story is one that is familiar in some ways. It is also one that it much easier to do wrong than it is to do right. Addison (now revealed to be Sarah Monette) did it very, very right.

This is a combination of coming-of-age/into-power story and political court intrigue. What makes it so good is that the author made the very insular court intrigue extremely fascinating by combining it with Maia’s coming of age story. There are no big battles in this book, but there are lots of tiny and important ones. Perhaps I should have said that there are no big army battles, because this book is not about warfare. The climax is in many ways quiet, but extremely compelling, and utterly fitting, in its quietness.

The plots come to their current conclusion, not with a bang (or a lot of bangs) but with a whimper. Maia goes from needing to tell himself that he is the emperor to fully inhabiting his role and his life, even if neither are what he wanted. They are what he has and he is determined to make the best of them. In the end, he wears it well.

Because we see this world from Maia’s often confused, sometimes frustrated, and constantly worried perspective, we feel each blow against him, whether it is political or physical or psychological, right along with him. We start out the story every bit as confused as he is about who is who and what is what. We thrill at his small triumphs as well as his big ones, because we are inside his skin. A place where we are often as befuddled as he is, but he is such a fully drawn character that we desperately want him to succeed.

Which he finally does, in his own way. As he tells himself at the beginning, he is not his father, and he will not be emperor in the same way that his father was. His way finally triumphs. We become his friends, as do many of the people around him, even though they have been taught that they shouldn’t.

And it is absolutely awesome.

Note on the audiobook version: The reader was terrific, and did an excellent job voicing all of the many, many characters in the story. Some reviewers have commented that there are a plethora of tongue-twisting names in this story, which there are. As a court intrigue, this court is fully populated with schemers and dreamers alike. While the names look almost like nonsense syllables in print, the audiobook made those names easier to follow. It also pointed out that none of the names are pronounced quite the way we expect.

3 thoughts on “Review: The Goblin Emperor by Katherine Addison”