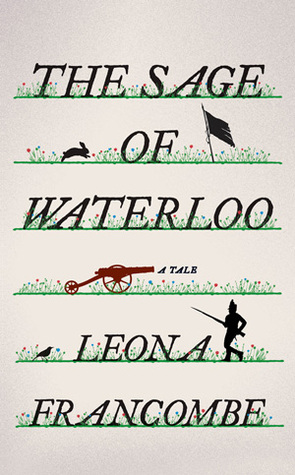 On June 17, 1815, the Duke of Wellington amassed his troops at Hougoumont, an ancient farmstead not far from Waterloo. The next day, the French attacked―the first shots of the Battle of Waterloo―sparking a brutal, day-long skirmish that left six thousand men either dead or wounded.

William is a white rabbit living at Hougoumont today. Under the tutelage of his mysterious and wise grandmother Old Lavender, William attunes himself to the echoes and ghosts of the battle, and through a series of adventures he comes to recognize how deeply what happened at Waterloo two hundred years before continues to reverberate. “Nature,” as Old Lavender says, “never truly recovers from human cataclysms.”

The Sage of Waterloo is a playful retelling of a key turning point in human history, full of vivid insights about Napoleon, Wellington, and the battle itself―and a slyly profound reflection on our place in the world.

“What is legend, though, but history written in the way that moves us most?”

The above quote is from The Sage of Waterloo by Leona Francombe, and it seems like a pithy saying that contains much truth.

The story itself is a mixture of what history, through the survivors, records of the truth of the Battle of Waterloo, or at least one small but vital section of it, and the legends that have accreted around that truth, both among the humans and among the rabbits who are the narrators of this particular little tale.

While it’s the stories writ small, downright rabbit-sized, that fascinate them most, it is still a truism that, as the narrator-rabbit William says, “Truth and legend are tricky bedfellows.”

This is not a coherent, day-by-day or hour-by-hour account of the huge battle, or even of the events that took place in one small theater of that battle, the farm at Hougoumont. Instead, it is the persistent legends that occupy the telling – those big events encapsulated into small, nibble-sized pieces.

But while the rabbits see the events in small and distant bits, they still see the whole of the battle. Also a few of the events that legend created out of the whole cloth, like the story of the haunted well. 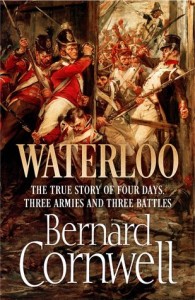 If you are looking for a factual, but still eminently readable, account of Waterloo, take a look at Bernard Cornwell’s Waterloo: The True Story of Four days, Three Armies and Three Battles, reviewed yesterday.

One wants to label The Sage of Waterloo as the story of the battle, as told by rabbits living on the farm two centuries later, as though it were Waterloo filtered through Watership Down, or possibly Redwall. It isn’t really.

Besides, Redwall is about mice. Not the same thing at all.

Instead, it’s a story about collective memory, collective consciousness, and the way that history fades into legend. It’s also about all of those places that send a shiver up your spine because you can feel what happened there, whether there is any evidence on the ground, or not.

It just so happens that this particular version is told by a fluffy bunny, who is far from fluffy in the head where it counts.

In William’s world, that long-ago battle is a metaphor for everything that happens in his life and to his little clan. His grandmother, Old Lavender, is a military historian who has gleaned her knowledge from the collective consciousness, from the currents in the air, and from tourists who wander the old battlefield while reading accounts of the battle to each other within earshot of the hutch.

Some of the history that Old Lavender learns and passes on is correct as history records it. Some is legend. But all of it informs her life, and William’s life after. As William said, “What is legend, though, but history written in the way that moves us most?”

Escape Rating B: I’m very glad that I read Cornwell’s book first. The Sage of Waterloo references a lot of the facts, as well as some of the legends, of that battle, and it helped a lot to have the knowledge of what happened when, and what didn’t happen at all, fresh in my mind.

There is, as I said, a temptation to think of this as Waterloo by way of Watership Down or Redwall, but it isn’t. Old Lavender, and William, tell and retell their version of the story of the battle, they do not experience it or anything like it themselves.

There’s no dangerous quest for them, just a determination to keep the history alive for the lessons it teaches, even when there is no one to teach it to.

One of those lessons, that the rabbits ponder upon because they have no analogy in their own lives is, “Strange, isn’t it, how men who can fight, suffer and die in close proximity to each other have such difficulty actually living side by side?”

There is a surprising amount of philosophical musing going on between William’s fluffy ears. In that way, the book reminded me a little of Sophie’s World by Jostein Gaarder, which is a study of philosophy wrapped in an adventure tale.

In short, The Sage of Waterloo isn’t nearly as twee as it sounds. The way that William’s family tells the story of the battle isn’t that much different from how it is remembered in legends, and the device is a cool (and cute) way of showing how legends persist.

But personally, I much preferred Cornwell’s strictly factual account. The extensive quotes from survivors gave the story all the human drama it needed.