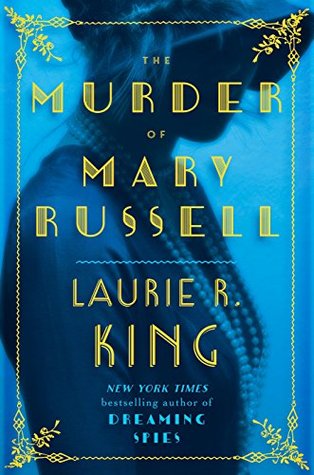 Laurie R. King’s bestselling Mary Russell–Sherlock Holmes series weaves rich historical detail and provocative themes with intriguing characters and enthralling suspense. Russell and Holmes have become one of modern literature’s most beloved teams. But does this adventure end it all?

Mary Russell is used to dark secrets—her own, and those of her famous partner and husband, Sherlock Holmes. Trust is a thing slowly given, but over the course of a decade together, the two have forged an indissoluble bond.

And what of the other person to whom Mary Russell has opened her heart: the couple’s longtime housekeeper, Mrs. Hudson? Russell’s faith and affection are suddenly shattered when a man arrives on the doorstep claiming to be Mrs. Hudson’s son.

What Samuel Hudson tells Russell cannot possibly be true, yet she believes him—as surely as she believes the threat of the gun in his hand. In a devastating instant, everything changes. And when the scene is discovered—a pool of blood on the floor, the smell of gunpowder in the air—the most shocking revelation of all is that the grim clues point directly to Clara Hudson.

Or rather to Clarissa, the woman she was before Baker Street.

The key to Russell’s sacrifice lies in Mrs. Hudson’s past. To uncover the truth, a frantic Sherlock Holmes must put aside his anguish and push deep into his housekeeper’s secrets—to a time before her disguise was assumed, before her crimes were buried away.

There is death here, and murder, and trust betrayed.

And nothing will ever be the same.

This book felt like two stories for the price of one. With part of a third thrown in for added body and spice.

The first 55% of this book details the life of times of Mrs. Hudson before she became Mrs. Hudson. In the Holmes’ Canon, Mrs. Hudson springs fully-formed, as if from the Head of Zeus. Or Arthur Conan Doyle. In the first half of The Murder of Mary Russell, we finally get to know who she was before she became Holmes’ and Watson’s mostly unflappable landlady – and what a story it is.

As Mary finally discovers, the woman that Clara Hudson really is, well, is a much different person than the one that Mary has loved and taken for granted these last ten years. We never see our parental figures as they see themselves, but Mrs. Hudson’s revelations are much more of a surprise than the usual. Then again, little turns out to be usual in Sherlock Holmes’ and Mary Russell’s world.

But as we read about Clara’s early life, and as Mary eventually discovers, beneath the plaster saint that Mary has somewhat assumed Mrs. Hudson to be, there beats the heart of an adventuress.

In addition to the story of Mrs. Hudson’s early life, and the true tale of how she first met the young Sherlock Holmes, we also dive back into Holmes’ first case, The Adventure of the Gloria Scott. A whole lot of people get much-needed closure in this old case of bank fraud, mutiny and murder on the high seas, and blackmail.

But the resolution of that old case is part of the second half of the story, as Mrs. Hudson’s former life comes crashing into her current life, with nearly devastating results for everyone involved. When the smoke clears, a life is over.

Escape Rating A-: The Murder of Mary Russell, in spite of its alarming title, does not appear to be the end of the Mary Russell and Sherlock Holmes series. But it certainly closes a chapter. 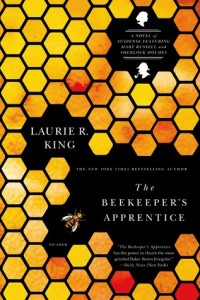 It is also not the best place to start the series. If you have not had the pleasure, I enthusiastically recommend starting with The Beekeeper’s Apprentice, where Sherlock Holmes meets a 15-year old orphan on the Sussex Downs, and first mistakes her for a boy. And second takes her as his apprentice.

But The Murder of Mary Russell does reach back into the past, and a past long before Mary herself comes into the picture. The story of Mrs. Hudson’s early life, while incredibly illuminating as regards a central figure in both the original stories and the Russell Kanon, just doesn’t have the same flair as is usual for this series. The complete and often sad story is necessary for the rest of the book, but it just doesn’t “sing”, or maybe that’s “zing” the way that Russell and Holmes usually do when they are together. When a very young Sherlock Holmes enters the story, just past the halfway point, the book suddenly picks up the dramatic pace, much as Holmes runs non-stop when he’s on the scent.

In other words, the first half of the story was interesting but a bit slow. The second half ran away with me, and I couldn’t put it down until I finished. Once all the players are finally together, the game is not merely afoot, but seems to sprint towards its climactic finish. The story, and the life and times of Mrs. Clara Hudson, wrap themselves up with both a literal and figurative “bang”.

For those who have followed this series from its beginnings, the end of this book, and the end of this chapter in all of their lives, is surprising and satisfying and sets the stage gloriously for more adventures yet to come.

I can hardly wait.

This is my birthday book. As in, when I saw the release date, I just about squeed in delight, because I have been waiting for this next book in the Sherlock Holmes/Mary Russell series since the minute I finished the previous book, Dreaming Spies, last year. Because my birthday just happens to fall on a Tuesday, The Murder of Mary Russell is being released on my birthday. And what a marvelous present it turned out to be!

As part of my Blogo-Birthday Celebration, the publisher agreed to let me give away a copy of The Murder of Mary Russell to one lucky U.S. commenter. I love this series and hope that you do, or will, too!

Review: A Conspiracy in Belgravia by Sherry Thomas
The Pirate King

16 thoughts on “Review: The Murder of Mary Russell by Laurie R. King + Giveaway”