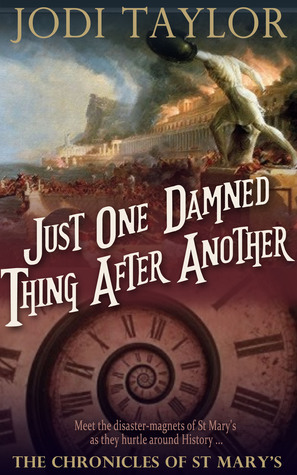 The first book in the bestselling British madcap time-travelling series, served with a dash of wit that seems to be everyone’s cup of tea.
“History is just one damned thing after another.” —Arnold Toynbee
Behind the seemingly innocuous facade of St. Mary’s Institute of Historical Research, a different kind of academic work is taking place. Just don’t call it “time travel”—these historians “investigate major historical events in contemporary time.” And they aren’t your harmless eccentrics either; a more accurate description, as they ricochet around history, might be unintentional disaster-magnets.
The first thing you learn on the job at St. Mary’s is that one wrong move and history will fight back—sometimes in particularly nasty ways. But, as new recruit Madeleine Maxwell soon discovers, it’s not only history they’re often fighting.
The Chronicles of St. Mary’s tells the chaotic adventures of Max and her compatriots—Director Bairstow, Leon “Chief” Farrell, Mr. Markham, and many more—as they travel through time, saving St. Mary’s (too often by the very seat of their pants) and thwarting time-travelling terrorists, all the while leaving plenty of time for tea.
From eleventh-century London to World War I, from the Cretaceous Period to the destruction of the Great Library at Alexandria, one thing is for sure: wherever the historians at St. Mary’s go, chaos is sure to follow in their wake.

The story opens with a quote attributed to the great historian Arnold Toynbee, that “History is just one damned thing after another…” What I find more interesting after having finished the book is that when Toynbee made that famous statement, he was actually quoting someone else, another historian named Elbert Hubbard.

In the context of the story in Just One Damned Thing After Another, there’s a quote from Hubbard that is possibly even more apropos, “Every man is a damn fool for at least five minutes every day; wisdom consists in not exceeding the limit.” Our protagonist in this story makes a point of using up her five minute quotient of foolishness every single day, down to the second. But she gets the job done – even when she doesn’t know quite what the job is until it’s chasing after her.

St. Mary’s is one of those places that doesn’t exist, but should. Maybe not its time traveling function, but at least its propensity for insanity and organized disorganized chaos. It feels a bit like it ought to be a graduate school for Brakebills from Lev Grossman’s Magicians Trilogy. There is that much insanity, that much chaos, and definitely that much threat to life and limb. Also the inability to talk about it with anyone after getting ejected.

We see everything and everyone through the eyes of one character, Madeleine Maxwell, better known as Max. The book begins with Max’ interview and introduction to St. Mary’s, and then follows her somewhat madcap career through training and early missions. I say somewhat madcap not because Max is occasionally serious but because madcap appears to be the norm for St. Mary’s. The staid and stolid either do not make it through the rigorous training in thinking on your feet and lying through your teeth, or they don’t survive their first missions.

And where do those missions go? St. Mary’s historians take trips back in time, using marvelous time travel pods. Kind of like TARDISes but with functioning chameleon circuits and limited to Earth’s past. However, unlike the frequently interfering Time Lord, the historians of St. Mary’s observe a rigorous version of Starfleet’s Prime Directive. They do not interfere, they only watch and record. Because history will defend herself vigorously and with extreme prejudice if a St. Mary’s historian even thinks of interfering with history.

Max is generally a disaster magnet of eye-watering and bowel-loosening propensity at the best of times, but when she and her partner get the mission to go back and observe the dinosaurs, it seems like the absolutely coolest thing ever. Until it all goes terribly, horribly, wrong.

Escape Rating A+: When I picked this up, I was expecting it to be something like The Invisible Library, which was marvelous in its own way. But not in the same way. The Chronicles of St. Mary’s do not dip their toes into the multiverse. Instead, their remit is the long and frequently bloody history of our very own Earth. They have all of the past to play in, as long as they restrict themselves to observation and recording. That still gives them a lot of possibilities, especially with an allied university that would really like someone to go back and resolve some of history’s unanswered questions.

So instead of The Invisible Library, this series’ godparents are probably Connie Willis’ time travel stories, especially Doomsday Book and To Say Nothing of the Dog (both awesome) and Kage Baker’s fantastic series about The Company, beginning with In the Garden of Iden and Sky Coyote.

In a bit of synchronicity, the St. Mary’s folks and The Company go back in time to rescue the same bit of history. It made me wonder if they just missed each other in the chaos and confusion that they were both taking advantage of. It could have happened…

Also similar to The Company, the historians of St. Mary’s are not the only people playing with time travel. If St. Mary’s represents the good guys, there are also bad guys. St. Mary’s interest is in preserving history. Their opposite numbers want to profit from it, and don’t care if they rip the timeline to shreds in order to do so. After all, they can just escape back into history and let the future unravel itself.

There is a lot going on in this story, and it is one of those wild ride type of stories that never lets up for a minute. While first-person-singular doesn’t always work, in this case it’s brilliant. Max and St. Mary’s deal with so much ambient chaos that viewing it all through the eyes of one single person pulls the reader into the world and into the story. There is so much going on that any kind of omniscience would be too much. 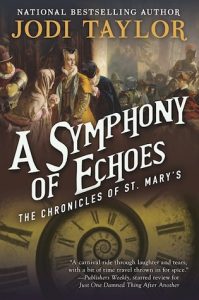 The events in Just One Damned Thing After Another are indeed also one fool thing after another. And there certainly are two fool things after each other. This story is one that will keep you thinking and smiling long after you turn the last page. It certainly did me, so I’m very happy to say that The Chronicles of St. Mary’s continue with A Symphony of Echoes.