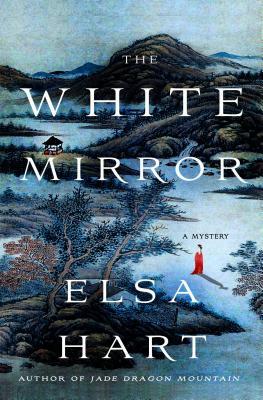 In The White Mirror, the follow-up to Elsa Hart’s critically acclaimed debut, Jade Dragon Mountain, Li Du, an imperial librarian and former exile in 18th century China, is now an independent traveler. He is journeying with a trade caravan bound for Lhasa when a detour brings them to a valley hidden between mountain passes. On the icy planks of a wooden bridge, a monk sits in contemplation. Closer inspection reveals that the monk is dead, apparently of a self-inflicted wound. His robes are rent, revealing a strange symbol painted on his chest.
When the rain turns to snow, the caravan is forced to seek hospitality from the local lord while they wait for the storm to pass. The dead monk, Li Du soon learns, was a reclusive painter. According to the family, his bizarre suicide is not surprising, given his obsession with the demon world. But Li Du is convinced that all is not as it seems. Why did the caravan leader detour to this particular valley? Why does the lord’s heir sleep in the barn like a servant? And who is the mysterious woman traveling through the mountain wilds?
Trapped in the snow, surrounded by secrets and an unexplained grief that haunts the manor, Li Du cannot distract himself from memories he’s tried to leave behind. As he discovers irrefutable evidence of the painter’s murder and pieces together the dark circumstances of his death, Li Du must face the reason he will not go home and, ultimately, the reason why he must. 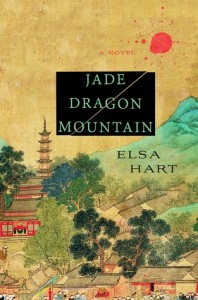 In this second story of the travels of Li Du, exiled Imperial Librarian, he has traveled far from the Court he left behind. But even in this remote mountain valley, it is still very much with him, and not just in his bittersweet memories.

At the end of the marvelous Jade Dragon Mountain, Li Du leaves China intending to travel to Lhasa. Even though his exile has been revoked after the services he renders to the Emperor in that tale, he still feels the urge to travel.

But the further he gets from his home, the more he longs for it. And the more that the mysteries he left behind beckon him to return.

Before that can happen, if it can happen, Li Du must first confront the mysteries that have arisen on his journey. His caravan has been taken off the beaten path, to a remote mountain village, for no reason that he can determine.

And as they reach their destination, Li Du finds himself in the middle of another murder mystery. Just as in Jade Dragon Mountain, Li Du has found another dead priest. But this time, the priest he has found is a Tibetan monk and not a Jesuit priest.

Not that there isn’t a Jesuit involved in this mess, because there is. But this time the Westerner is neither the victim nor the perpetrator. He is lost on a mission of his own. And he is just plain lost.

As the valley is covered in snow, the caravan is stuck waiting for the thaw. And Li Du finds himself incapable of letting the matter rest. The locals want to believe that the bizarre death of the priest is suicide, in spite of many, many clues that make that verdict a bit difficult to swallow. But no one wants to talk about murder.

Except Li Du, and his friend the storyteller Hamza. Li Du may be in pursuit of the truth, but Hamza seems to be looking for a good story. And he tells a bunch of them as he assists his friend.

At first, it seems as if this village murder is a local crime for local reasons. It is all too obvious that someone has designs on the local landowner, his holdings and his pretty wife. There’s a ready made villain, but not one who would have had a reason to kill the more than a bit crazy priest.

Li Du is forced to look far far afield for the reasons behind this crime. He may have left the Imperial Court, but its intrigues have found him. It is up to him to solve the crime before it claims more victims, or before the snow melts and he is forced to leave it all behind.

Escape Rating A-: This story started a bit slower for me than the utterly awesome Jade Dragon Mountain. In the end, I enjoyed The White Mirror very much indeed, but I missed the machinations of the court that permeated the action in the first book. The more this story reached out beyond its remote mountain setting, the faster it flew and the more I loved it.

There are so many delicious red herrings scattered through this snowy landscape. There is some obvious skullduggery going on between the landowner, his wife and his cousin. In that piece of the story there’s a fascinating amount of information about the way that the Dalai Lama and other Lamas are chosen. And how easily that process can be manipulated for both personal and political ends.

At first, it seems as if the current mystery is part of a conspiracy to make the wrong boy a lama, and a different but  equally wrong boy the heir to the household. It’s tragic that both young men have found themselves in situations to which they are not suited, and part of the solution to the crime allows them an opportunity to figure out who they are really meant to be.

But the mystery in The White Mirror, just like the one in Jade Dragon Mountain, involves wheels within wheels, and plots surrounded by counterplots. By the end of the story, we discover that no one is quite who they initially pretended to be. Removing their masks and discovering their true loyalties is what allows Li Du to finally determine not just who murdered the monk, but also why it was done. And just how far the tentacles spread.