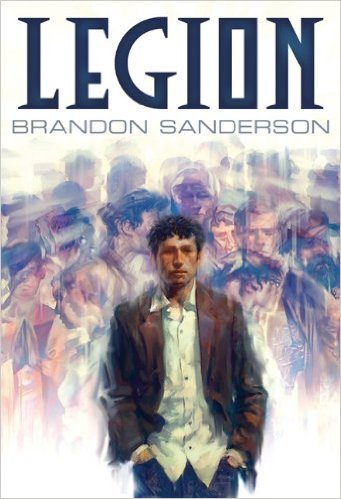 "Stephen Leeds, AKA 'Legion,' is a man whose unique mental condition allows him to generate a multitude of personae: hallucinatory entities with a wide variety of personal characteristics and a vast array of highly specialized skills. As the story begins, Leeds and his 'aspects' are drawn into the search for the missing Balubal Razon, inventor of a camera whose astonishing properties could alter our understanding of human history and change the very structure of society"--From publisher's description

I was looking for another relatively short audiobook, and a friend recommended this one to me. I’ve never read anything by Brandon Sanderson before, but always meant to. And after Legion, I certainly will again.

Legion is partially SFF as mystery, and partially a fascinating character study. Or perhaps I should say “characters study”. Because one of the central questions of the story is just how real each of Stephen Leeds ‘aspects’ is. Or isn’t. He treats them as real, but he is also aware that they are hallucinations.

At the same time, he insists that he’s not really a genius. That all of his supposed insights are due to the intelligence and efforts of those ‘aspects’. He just provides the synthesis. And the body that gets them around.

But he insists that most of them believe that they are real, and he doesn’t like to upset them. That he has managed to hire and actually KEEP a butler who is willing to go along with all of this is a testament to the essential sweetness of Stephen’s nature, as well as the depth of his pocketbook.

Stephen Leeds is rich. Seemingly, as they say, beyond the dreams of avarice. Whether the genius is his or belongs to his aspects, the use of that genius has brought him a lot of money in consultant fees. Also an endless stream of annoying psychology students who regularly attempt to breach his privacy by obvious trickery. The aspects catch the fakers every time.

But his new client is no faker. She presents him with a series of black and white photographs that appear to have been taken with a time machine. A photograph of Shakespeare. Another of George Washington, shaving. And the real draw for Stephen – a photograph of the woman who taught him how to manage his crazy genius and then left without a trace.

His aspects insist that the photos are real and not faked, even though the historical ones were taken long before the invention of photography. And his client, Monica, insists that her company has discovered the secret of taking photographs of historic events as they happen – but that they’ve lost both the photographer and his magic camera.

From there, it’s off to the races, as they attempt to track down the missing photographer before someone steals his invention, and before someone uses him and it to unbalance the world.

Escape Rating A-: This was incredibly fun. I found myself driving around a bit more than usual, just so I could finish it. The premise was unique and interesting, and the mystery that it wraps around was quirky and absorbing.

There’s so much to unpack in this short novella. It does lie on that cusp between science fiction and fantasy. The time-traveling camera is technology, so science fiction. But the way that Leeds ‘aspects’ act and react feels a bit more like fantasy. How do they do what they do, especially when he is not present?

But the science fiction and fantasy bits, while not window dressing, feel more like the way the author gets to the heart of the story than the actual story. At heart, this feels like a mystery. Leeds has a missing persons case to solve, he just uses a slightly more ‘out there’ cast of irregulars than is normal. 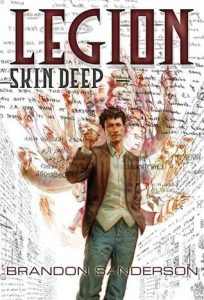 Which he insists that he is. Normal, that is. Stephen Leeds believes that he is sane and that his aspects are the various forms of crazy. But whatever they are, they do have personalities and specialties of their own, and without the correct specialist Stephen doesn’t think he has access to parts of his genius.

How much the reader falls into his way of thinking is part of what makes this story work so well.

I’m very glad that I picked up Legion, and I’m looking forward to listening to the second book in the series, Skin Deep. I hope the author returns to this world to bring us more of Stephen Leeds’ adventures.