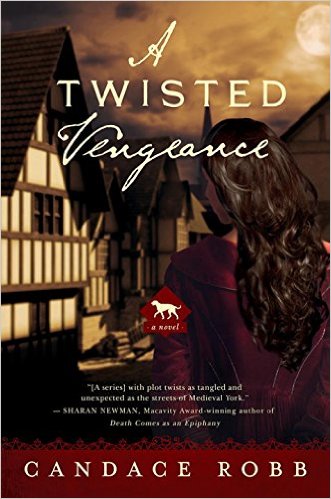 1399. York is preparing for civil war, teeming with knights and their armed retainers summoned for the city’s defense. Henry of Lancaster is rumored to have landed on the northeast coast of England, not so far from York, intent on reclaiming his inheritance—an inheritance which his cousin, King Richard, has declared forfeit.
With the city unsettled and rife with rumors, Eleanor Clifford’s abrupt return to York upon the mysterious death of her husband in Strasbourg is met with suspicion in the city. Her daughter Kate is determined to keep her distance, but it will not be easy—Eleanor has settled next door with the intention of establishing a house of beguines, or poor sisters. When one of the beguines is set upon in the night by an intruder, Kate knows that for the sake of her own reputation and the safety of her young wards she must investigate.
From the first, Eleanor is clearly frightened yet maintains a stubborn silence. The brutal murder of one of Eleanor’s servants leads Kate to suspect that her mother’s troubles have followed her from Strasbourg. Is she secretly involved in the political upheaval? When one of her wards is frightened by a too-curious stranger, Kate is desperate to draw her mother out of her silence before tragedy strikes her own household. 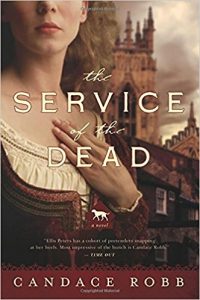 In yesterday’s review, I noted that one of the things that historical mysteries often have in common is that they are set in times of great political upheaval. And so it proves with A Twisted Vengeance, the second book in Candace Robb’s Kate Clifford series, after last year’s The Service of the Dead.

Kate Clifford, the protagonist and amateur detective of this series, lives in York, England in 1399, a time when England was again on the cusp of civil war. (While England has only had one conflict officially called the English Civil War, it has had lots of civil wars that were named something else.) In 1399, what Kate and her city are experiencing is part of the long run up to the Wars of the Roses, which may have “officially” begun in 1455 but had their roots in much earlier conflicts.

At this particular point in the century-long mess, Richard II, unbeknownst to all the characters in this particular story, is about to be deposed by his cousin, the Lancastrian Henry of Bolingbroke, crowned as Henry IV. While the deposing, and later beheading, hasn’t happened at this point in Kate’s story, the conflict between Richard and Henry is in full swing, with nobles and their knights scurrying for position on both sides, or sometimes, as in yesterday’s book, attempting to straddle the increasingly mushy middle.

York, as the second city in England and the unofficial capital of the North, is a prize coveted by both factions. As our story begins, both factions have sent knights, spies and seemingly unaffiliated with surprisingly well-armed men to camp in and around York, in hopes of glorious battle and rich plunder.

And all of them are spoiling for a fight.

Kate, on the other hand, is trying to keep her head down, manage her properties, and get out from under the onerous weight of her late husband’s massive debts and away from the grasping machinations of his family. Her initial efforts in this regard form the backdrop of The Service of the Dead. Her late husband being the dead in that instance, and no one seems to lament the bastard. Not even his bastards.

But Kate’s hopes for peace are immediately dashed in this story, when someone attacks the house next door. Unfortunately for Kate, her mother has moved into that house. And whatever Dame Eleanor’s ostensible reasons for her move to open a lay religious house on Kate’s doorstep, Kate knows that her mother always has layers under layers of motivations, and that somehow Kate will end up picking up the pieces while enduring streams of her mother’s verbal abuse.

Dame Eleanor has a dangerous secret. And just like all of Eleanor’s secrets, it is going to get someone killed. And, also as usual, that secret is going to do it and Eleanor’s damn level best to drag Kate under with it.

Escape Rating A-: A Twisted Vengeance grabbed me from the very first page, and didn’t let go until around midnight, when I turned the last page and heaved a sigh of relief. No one escapes from this one unscathed, and danger piles upon danger (also secret piles upon secret), from the first to the last. But our heroine and her fascinating and motley household do live to fight (and investigate) another day.

One of the reasons that A Twisted Vengeance was able to do that first-page grab was because all of the setup had already been handled in The Service of the Dead. That first book has a rather slow beginning, because the richness of this historical setting, and the circumstances of Kate’s rather singular position in it, take a while to take hold. The investment of time in reading the first book, definitely pays off here in the second.

In the end of this outing, the army leaves, and all is finally revealed, not necessarily in that order. That army, and all of its plotting and scheming, are in many ways a giant (and very stinky) red herring, confusing all the issues and providing too many places for too many villains to hide in plain sight.

When all is said and done, and there’s a lot of both, this is a story about family. Both writ large, as the family squabbles and family conflicts are a huge part of the political landscape, and as the great lords use the conflict as an excuse to enact their petty (and not so petty) revenges.

But also writ small, in the neverending conflict between Kate and her mother Eleanor. Where the political shenanigans can sometimes get very large and seem very arcane, the little war between Kate and Eleanor is easy to understand and sympathize with. It will remind every woman who has ever had issues with her own mother (and the number of women who have never had such issues is vanishingly small). The yawning gap between mothers and their grown daughters is a chasm filled with childhood resentments and parental admonishments.

In 21st century terms, parents have such an easy time pushing our buttons because they are the ones who installed them.

Kate doesn’t trust Eleanor because Eleanor keeps secrets, as she is in this instance. And while much of their conflict lies in the past and in patterns neither of them seems able to change, the fact is that Eleanor’s secrets have gotten people killed in the past, and Kate is right to both worry and be mistrustful.

A Twisted Vengeance, like The Service of the Dead and the author’s absolutely marvelous Owen Archer series, is a historical mystery for those who love a rich, detailed slice of history served up with their engrossing mystery. If that’s you, Kate Clifford is a heroine to follow.