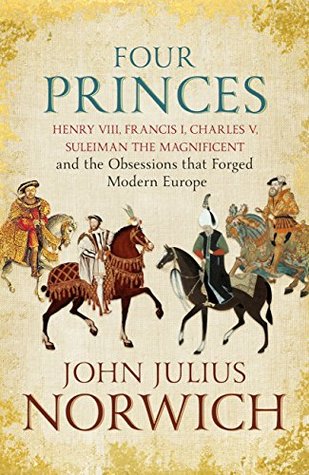 In Europe, 1491 to 1500 was an exciting time to be alive. The entire continent was overshadowed by four rulers, all born within a ten-year period:
King Francis I of France, the most interesting of the quartet, bursting with energy and swagger, was a great patron of the arts and the personification of the Renaissance.
King Henry VIII of England—who was not born to be king but embraced the role with gusto—broke with the Roman Catholic Church, and made himself head of the Church of England.
Charles V, Holy Roman Emperor, the most powerful man in the civilized world, obsessed with the religious disputes of Europe, was leader of the Spanish and then Roman Empire.
Suleiman the Magnificent, the richest of them all, stands apart as a Muslim, who brought the Ottoman Empire to its apogee of political, military, and economic power, as well as to the golden age of its artistic and architectural prowess.
Never before had humankind seen such giants coexisting. Against the rich background of the Renaissance, they laid the foundation for modern Europe. Individually, each man could hardly have been more different. Their mutual relations shifted constantly: often they were actively hostile and occasionally they were friendly. There was a healthy respect between them; never did one make the mistake of underestimating another. And together, they dominated the world stage.

I know that this isn’t quite my usual, but, once upon a time, back when I was about 12, I saw the movie Anne of the Thousand Days. It was a very, very fictionalized account of King Henry VIII and his second wife, Anne Boleyn. And for some reason, I was absolutely fascinated.

Not by the so-called tragic romance, but by the time period. I was just old enough to develop an intense fascination with history, and for years after seeing that movie I read pretty much anything I could get my hands on about the Tudor period, eventually expanding into the Plantagenets and the early Stuarts.

I also wasn’t too particular about whether the book was fiction or nonfiction. If it was within my reasonable comprehension, I comprehended it. It was also during this time that a friend’s mother gave me a copy of Josephine Tey’s The Daughter of Time, one of those book relationships for which I will be forever grateful.

It was my abiding interest in all things Plantagenet, Tudor and Stuart that led me to both Dorothy Dunnett’s sprawling, compelling, immersive Lymond series and eventually to Outlander. For a movie that wasn’t actually all that good, at least according to the critics, it cast a surprisingly long shadow over my reading life.

It’s been a long time since that deep dive into English history, but when I saw Four Princes up on Edelweiss, it just called to me. This was that period, and it looked like a bit of “once over lightly” of both the English history that I remembered so fondly and the greater European history that it touched on but generally did not explore.

And so it proved. I expected to kind of “dip into” Four Princes for the parts I recognized. Instead, I found myself absorbed, reacquainting myself with history I knew, and filling in so much that I glossed over back then.

We tend to think of kings (and queens) and historical personages in general as old and grey, not because they were born old, but because by the time they are famous and their portraits got painted, they generally were, as the saying goes, in the autumn of their lives, if not downright close to midwinter. As the play Hamilton hints at, while we may remember the U.S. Founding Fathers as old men in white wigs, at the time of the Revolution they were, for the most part, young. Except for Benjamin Franklin – he HAS always been old. 😉

What Four Princes brings to the fore is that in the first half of the 1500’s, the monarchs of the four great powers, England, France, the Holy Roman Empire (which, as we know, was neither holy nor Roman nor exactly an empire) and the Ottoman Empire all came to power within a decade of each other and were all, in fact, born within a decade of each other. Which means they were all young together, all took their thrones young and together and spent all of their respective reigns dealing with each other in particular, and not just that their countries worked for or against each other with different people at the helm each go around.

And for the most part, they all knew each other. Henry of England, Francis of France and Charles of the Empire had all met and were all related to one degree or another. Suleiman the Great was the outlier, most mysterious and least known in Europe – no matter how much or how often he threatened it.

And they each had outsized and long-lasting impacts on their respective countries, if not on each other. In their half century, Henry created the Church of England, Francis began the religious persecutions that stained so much of its history, and both Empires reached the heights of their powers – heights they never attained again.

Reality Rating A: If you have an interest in European history, or enjoy reading history in an accessible style (or honestly, if you know a student who needs to read a relatively short history book that is actually good to read) Four Princes is excellent. It made me remember why I was so fascinated with this period, and has gotten me hooked all over again.