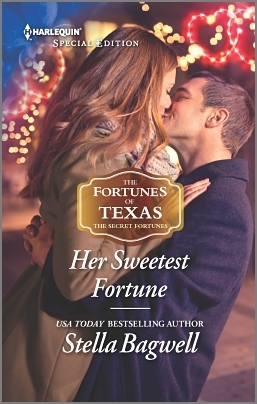 Sophie Fortune Robinson is on a mission. The word around the office watercooler is that the boss's youngest daughter is intent on landing Mr. Right by Valentine's Day--and that she has her eyes, and heart, set on a certain hunk in Marketing. But when she enlists her longtime pal and coworker Mason Montgomery to teach her how to get a man to notice her, little does she know she's already captured his attention!

Now Mason's in a real bind! He has just a few short weeks to fight his way out of the "friend zone." On his agenda: convincing sweet Sophie that he is the real man of her dreams! Will Fortune smile on true love's venture?

Sophie Fortune Robinson has found her man, The One For Her.  He must be! And she’s utterly certain that she’s the right catch for him. Only–well, see, there’s this guy from IT, and he’s been a good friend to her for a while now, and it doesn’t seem to matter to him that she’s part of the stunningly wealthy Fortune clan.

Escape Rating: A-. Stella Bagwell has written over ninety books for Harlequin, and this isn’t her first foray into the sprawling “Fortunes of Texas” arc of stories. Going in, it looks really predictable: it’s the “I Was Here All Along” trope, tried and true. But Bagwell is an experienced author, so I was counting on a surprise.

I had a little trouble understanding where our heroine was coming from, at the outset of this book. We know she’s the boss’s daughter, she’s interested in the flashy dude from marketing, and she’s only-recently been found to be a scion of the massive Fortune clan around which this group of stories revolve. But, to me at least, she came off a little…shallow. Think of Disney’s Gaston, from Beauty and the Beast:

“She’s the one, the lucky girl I’m going to marry!”

“The inventor’s daughter? But she’s…”

“The most beautiful girl in town! And that makes her the best! And don’t I deserve the best?”

The opening sequence of this book feels like a gender-swapped version of that, to me. He’s the hunkiest, and he’s high up in marketing, so he’s The One, and she’s set her cap to get him. Sure, that’s the formula at play here, but Sophie comes off as almost predatory. For me, it was a tiny sour note, right from the outset, but being the stubborn reader that I am, I powered on.

Once we see where this is heading, it’s easy to think that the end will write itself. But not so fast–it turns out that Sophie’s infatuation with the hunk ends much earlier in the book than I expected–she and her pal Mason, the IT guy, hit it off, and things are ticking along marvelously, before we’re even 2/3 of the way through the book. But what about the subplot that got Sophie into this “Fortunes of Texas” arc in the first place? Her father, you see, lived a double life for a long, long time, and it turns out that he’s a Fortune–and he has illegitimate kids here and there, to boot. Sophie’s brothers and sisters have discovered another one, and it’s stressing her. She withholds this from Mason, and also is keeping their relationship on the sly, to avoid gossip. Predictably, Mason’s not okay with this state of affairs for long, and only then do we see where the real ending of the story will be. Bagwell gave us two Harlequins in one, in a way, and it was cleverly done.

Stella Bagwell shows us her expertise as a writer in Her Sweetest Fortune, and it made for a lovely read for me. Like most Harlequins, this is not a book to dwell on and think over; it’s escapism, pure and clean and unadulterated. Other than the minor bobble with the opening, it’s a cute, fun story, and well worth a read.