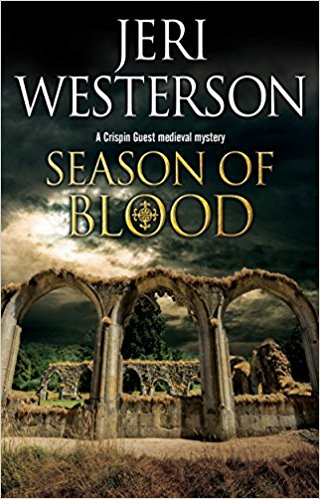 1390. Hailes Abbey, Gloucestershire, England. Two monks lie murdered, their Holy Blood relic stolen: a relic that is said to run liquid for the sinless and remain stubbornly dry for the sinner. Unwilling to become involved in a bitter dispute between a country monastery and Westminster Abbey, the disgraced former knight Crispin Guest attempts to return the relic to Hailes where it belongs, but somehow it keeps returning to his hands no matter what.

As he tries to shield a former nemesis from a charge of murder while becoming entangled with a mysterious and beautiful woman caught between Church politics and the dangerous intrigues of King Richard's court, Crispin begins to suspect that someone at Westminster is conspiring with the assassins. Can the Blood of Christ point to the killer? 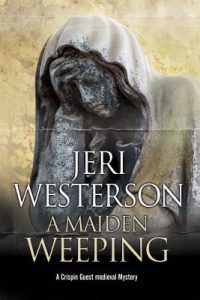 Season of Blood follows last year’s A Maiden Weeping, and Crispin seems to have learned very little from all the trouble he got into during that case.

A man dies on his doorstep with a knife in his back. In Crispin’s down-at-heels section of London, that actually might not be all that uncommon an occurrence. But the dead man in this particular case is a monk. And in addition to his corpse, he leaves Crispin with two big problems.

That knife in the monk’s back clearly bears the seal of Simon Wynchecombe, former Sheriff, current Alderman, and always a thorn in Crispin’s side. Simon hated Crispin while he was Sheriff, and beat and belittled him at every turn, including when he needed Crispin to resolve a case.

The second problem presented by the corpse is that he has a religious relic in his possession. Crispin has been involved with relics before. He doesn’t trust them or the people who traffic in them. But the damnable things keep invading his life, and that never ends well for him.

On the heels of the corpse, a woman hires Crispin to find her errant niece, who seems to have run off with a married man – that married man being the same Simon Wynchecombe whose knife was in the dead man’s back.

This all should scream “unlikely coincidence” to Crispin the expert tracker, but something about this woman has Crispin doing most of his thinking with his little head instead of his big one. Not that that hasn’t happened before, too. Crispin can never resist a pretty face, especially when there’s a clever brain behind it.

So Crispin, as usual, finds himself investigating a case where he trusts that no one is telling the truth. He is forced to rely on his own wits to determine who killed the first monk (and eventually the second and the third) without having anything like 21st century forensic science. Only his own knowledge of how things work and how people behave – even if his wits are a bit addled by the beautiful woman who seems to be at the center of this spider’s web of a case.

And just because he doesn’t believe in the truth of the relic, doesn’t mean that others are not willing to kill for them. Or that just because so many of the people involved with this case are celibate monks, does not mean that there are not men under those robes, just as fascinated by a pretty face as he himself is. Possibly even the same pretty face.

The chance to solve this conundrum tests Crispin at every turn. But the unexpected chance to score against an enemy – PRICELESS.

Escape Rating B+: A part of me wants to say that this was fun, in spite of the dead bodies falling at every turn. This case is interesting because it is so foreign. The past is definitely another country in this one.

Crispin is skeptical about the truth and the efficacy of those much venerated relics. His attitude is in some ways almost modern, and in others fits within his time. He’s not sure they are real, but if they are, we don’t deserve them. And it’s not for him to judge their religiosity, only to follow the trail of death and end it – no matter the cost.

But this is a case where trying to follow “who benefits?” is difficult because the benefits don’t seem based in our reality – even though they are in theirs.

As always, Crispin is a fascinating character. Once upon a time, he was a nobleman, who lost his station and his fortune by backing the wrong claimant in one of the early skirmishes of what became later known as the “Wars of the Roses”. He should have been killed for his treason, but instead he was reduced severely in station.

He should have died of his ignorance, but instead was helped and taught until he could manage to make his own living as the infamous “Tracker” who solves problems for a fee and shows up the Sheriffs at every turn. He has seen life from both the heights and the depths, but is a stranger in both and at home in neither.

He’s also in his mid-30s and starting to feel that he is no longer young. At the same time he has no idea of if or how to “settle down”. He does have a knack for gathering interesting people around him who both help and support him. A group that gets more interesting all the time, particularly in this outing.

If you like historical mysteries where you really feel (and occasionally taste and smell) just how different the past is from our own present, Crispin Guest is a master at bringing his world to life – and solving its suspicious deaths. 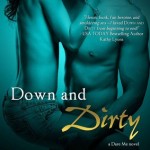 Review: Down and Dirty by Christine Bell

2 thoughts on “Review: Season of Blood by Jeri Westerson”