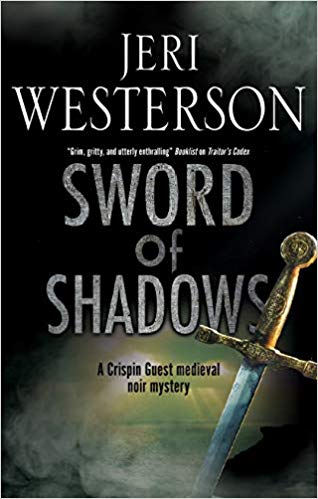 A quest to find the ancient sword Excalibur quickly turns into a hunt for a determined killer for Crispin Guest.

London, 1396. A trip to the swordsmith shop for Crispin Guest, Tracker of London, and his apprentice Jack Tucker takes an unexpected turn when Crispin crosses paths with Carantok Teague, a Cornish treasure hunter. Carantok has a map he is convinced will lead him to the sword of Excalibur - a magnificent relic dating back to King Arthur and the Knights of the Round Table - and he wants Crispin to help him find it.

Travelling to Tintagel Castle in Cornwall with Carantok and Jack, Crispin is soon reunited with an old flame as he attempts to locate the legendary sword. But does Excalibur really exist, or is he on an impossible quest? When a body is discovered, Crispin's search for treasure suddenly turns into a hunt for a dangerous killer.

“The past is a foreign country; they do things differently there,” or so the saying goes. And that’s certainly true in the Crispin Guest Medieval Noir series, of which Sword of Shadows is the lucky, or unlucky, 13th book.

They may DO things differently in 1396 A.D., but that doesn’t mean that human beings are actually any different, either better or worse, than they are in 2020. Or than they were at the time of King Arthur and his Knights of the Round Table, whether that was the quasi-medieval era as later chroniclers made it, the latter part of the Roman occupation of Britain, as historians claim it, or a magical period of myth and legend as written in the chronicles of Geoffrey of Monmouth – the only version that would have been extant in Crispin’s time.

King Arthur shouldn’t be relevant, as Crispin deals in facts and motives, evidence and crimes, in the real world. But he also needs to keep a roof over his head and food in his belly. While he is best known as the “Tracker of London”, solving crimes and righting miscarriages of justice, sometimes he takes other work.

So this tale begins. A gentleman “treasure hunter” feels that he is on the track of Excalibur. While the sword may be shrouded in myth and legend, Carantock Teague believes that he has found clues to the fabled artifact’s location – that Excalibur is hidden somewhere near Tintagel Castle in Cornwall, purported to be the site of King Arthur’s birth. Teague hires Crispin – and Crispin’s apprentice Jack – to come with him to Cornwall and help him search for it. And to guard him if he finds it.

The pay is too good to turn down, even with a wet, cold, miserable fortnight’s journey to Tintagel by horseback to start it off.

But once there, the search for the sword is complicated by the discovery of not one but two extremely recent corpses. Meanwhile, Crispin’s sometime quarry and occasional lover, Kat Pyle, has arrived in this remote spot to either bedevil Crispin, nab the treasure before he can, or make some other mischief.

Knowing Kat as he does, Crispin can’t help but wonder if the answer is “all of the above – and more.”

The question is whether it is only Crispin’s heart at risk – or his life. 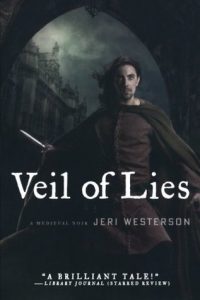 Escape Rating A-: Sword of Shadows was a terrific read. It was a return to a series that I’ve picked up off and on over the years and always enjoyed. It dipped into a legend that has always fascinated me, the Matter of Britain, or as it is better known, the tales of King Arthur and his Knights of the Round Table. And it was also a reminder of journeys of my own, as I read the first three books in this series, Veil of Lies, Serpent in the Thorns and The Demon’s Parchment, on a Caribbean cruise, back when such things were possible. This series was among the first things I read on my then-new Nook. How time flies.

That being said, although there were nostalgic elements attached to this story for me, I don’t think they are necessary to enjoy this book. If you love historical mystery, this is one of those series where the author has meticulously researched every detail, and the reader feels as if they are walking beside Crispin whether on the streets of London or exploring the caves on the Cornish coast. This is a series where you not only feel the feels, but you also smell the smells – good and bad.

It is a series where some prior knowledge is probably helpful, but does not have to be exhaustive. I haven’t read the whole series, just dipped in here and there, and enjoyed the journey back to England during the reign of Richard II, during the opening stages of what history would call the Wars of the Roses.

This particular event in Crispin’s life is a bit different than the usual stories in this series as it takes Crispin out of the London that he has come to call home and out into the country, far away from not just his home but from any place with which he is familiar. Crispin has become a creature of London, a man of the city, that’s where his reputation and his living are.

In Tintagel he is a complete outsider, and has to do his job of tracking the murderer – or murderers – in a place where he is not well-known, where his current reputation is of no help but his long-buried past as a traitorous knight is still remembered. He knows no one, but he still has a job to do – even if it’s one that he isn’t getting paid for.

At the same time, he is teased and tormented by the search for Excalibur and the legends surrounding it. In the end, catching the murderer, as difficult as it is, turns out to be easier than letting go of the search for the sword. The myths that are wrapped around the hilt of Excalibur have caught better men – and many, many searchers – before Crispin, and have continued to do so after, inspiring creators century after century. The way that Excalibur fades into the mists of Cornwall in this story feels right – and sends a chill up the spine at the same time.

The author claims that Crispin’s story is coming to an end. His next outing, Spiteful Bones, will be his next-to-last adventure. Normally I’d say that I couldn’t wait to read his next book, but knowing that his journey is coming to an end means that I’ll be happy to wait a bit. I’ll be sad to see him go – but I hope it will be into a happy and successful retirement. We’ll see. 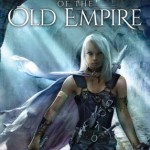 Review: Blades of the Old Empire by Anna Kashina

2 thoughts on “Review: Sword of Shadows by Jeri Westerson”