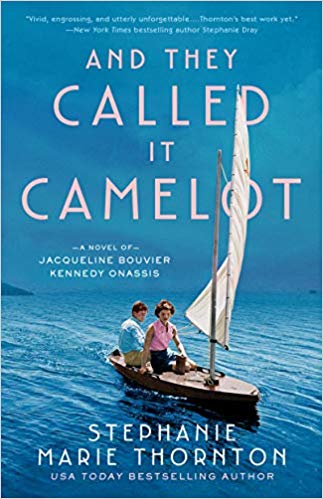 An intimate portrait of the life of Jackie O…

Few of us can claim to be the authors of our fate. Jacqueline Bouvier Kennedy knows no other choice. With the eyes of the world watching, Jackie uses her effortless charm and keen intelligence to carve a place for herself among the men of history and weave a fairy tale for the American people, embodying a senator’s wife, a devoted mother, a First Lady—a queen in her own right.

But all reigns must come to an end. Once JFK travels to Dallas and the clock ticks down those thousand days of magic in Camelot, Jackie is forced to pick up the ruined fragments of her life and forge herself into a new identity that is all her own, that of an American legend.

I began this week with Camelot, so it seemed fitting to end the week in the same place. A part of me wants to say something about the Camelot of Sword of Shadows being the Camelot of myths and legends – but as we now look back nearly 60 years in the rear-view mirror, the brief, shining moment of the Kennedy Administration seems very nearly as mythic – and just as shrouded.

I still hear the title of this book as the words to the finale theme song from the play and movie, and hear it in the late Richard Harris’ voice with the music in the background. It was one of my favorite albums, both the original cast recording and the soundtrack of the movie. Right along with Vaughn Meader’s spoof, The First Family. There’s a bit of art imitating life imitating art in this circle, as the administration derived its nickname from the play, while the spoof album was inspired by the administration.

The story in this fictionalized biography is the life of Jacqueline Kennedy Onassis, of the years when she was the shining star of the public stage – even the Onassis years when that star was more than a bit tarnished. Just like Jackie herself, her life captivates the reader and doesn’t let go until the very end.

Based on this fictionalized account, told in Jackie’s first-person voice as events unfolded, if even half of what happens is true, then, to paraphrase the title of a book about JFK, Jackie, we hardly knew you.

Escape Rating A+: First and most important, Jackie’s story is every bit as spellbinding as she was. I picked this up in the afternoon, and finished at 2 in the morning. Once I started, I couldn’t stop – and didn’t even want to.

Some of that was nostalgia, as the Jackie years of this story are part of the background of my own life. We begin Jackie’s story in 1952, during Jackie’s whirlwind romance with the dashing young Senator, Jack Kennedy. The story ends in 1979, at the dedication of JFK’s Presidential Library, while Jackie was working as an associate editor for Doubleday. With one last tragedy in her life still to come, the death of her son, who was once the little boy in the White House that the press nicknamed “John-John”.

Along the way is a story of triumphs and tragedies. Whether those two are equally balanced is something that only she could have judged. For the reader, this is a life that seems to have filled with both the highest of highs and the lowest of lows.

Part of the fascination in reading this book is that it is told in the first-person. We feel as if we are inside Jackie’s head during all those times when she projected an image of the perfect First Lady. At first, it felt a bit weird being in her head. And there’s a moment of doubt when the reader has to wonder how close to the truth the author has come.

But the view from behind her eyes is so compelling that the reader is just caught up in it. The story gives weight and color to an image that in retrospect looks perfect and plastic in a way that real people never are. And she was very, very real.

The story is also more than a bit salacious, not just because of Jackie’s perspective – and anger – over JFK’s many, many, MANY (need more many’s) sexual liaisons, but also at hints that Jackie had a long-running affair of her own with Bobby Kennedy after Jack’s death. A possibility that historians can’t seem to make their minds up about either, but something that was certainly never publicly speculated about at the time.

It’s interesting to note that although this is Jackie’s life, the story is dominated, not merely by the Kennedys, but by three Kennedys in particular. The story opens at the beginning of Jackie’s life with Jack, middles with her relationship with Bobby (whatever it might have been) and closes not long after the death of Joseph P. Kennedy, the patriarch of the family. Nearly everything that happens to her is colored or influenced by the effect it will have on the family. It’s as though, until the Presidential Library is complete, she’s just a secondary player in her own life. But ironic that once she is able to live fully for herself, she fades into the shadows.

And They Called It Camelot is an absolutely compelling read. It’s a view behind the looking glass at a life that seemed to have been lived completely in the public eye, telling us things we never knew and providing insights we never expected. It is absolutely one of those stories where, as Neil Gaiman famously put it, “Fiction is the lie that tells the truth”.

Because even if the story isn’t completely true – it sure feels like it is.