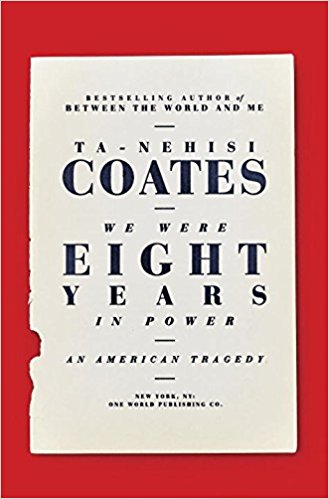 "We were eight years in power" was the lament of Reconstruction-era black politicians as the American experiment in multiracial democracy ended with the return of white supremacist rule in the South. Now Ta-Nehisi Coates explores the tragic echoes of that history in our own time: the unprecedented election of a black president followed by a vicious backlash that fueled the election of the man Coates argues is America's "first white president."

But the story of these present-day eight years is not just about presidential politics. This book also examines the new voices, ideas, and movements for justice that emerged over this period--and the effects of the persistent, haunting shadow of our nation's old and unreconciled history. Coates powerfully examines the events of the Obama era from his intimate and revealing perspective--the point of view of a young writer who begins the journey in an unemployment office in Harlem and ends it in the Oval Office, interviewing a president.

We Were Eight Years in Power features Coates's iconic essays first published in The Atlantic, including "Fear of a Black President," "The Case for Reparations," and "The Black Family in the Age of Mass Incarceration," along with eight fresh essays that revisit each year of the Obama administration through Coates's own experiences, observations, and intellectual development, capped by a bracingly original assessment of the election that fully illuminated the tragedy of the Obama era. We Were Eight Years in Power is a vital account of modern America, from one of the definitive voices of this historic moment. 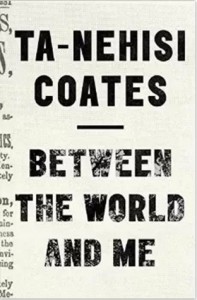 I came to this book via multiple odd routes. I heard the author speak a couple of years ago, because my husband really likes his writing. While it doesn’t resonate with me quite the same way, when it does, it really, really does. Coates’ comment at the beginning of Between the World and Me regarding the social construction of whiteness in America, and how that social construct can be withheld, conferred and taken away as conditions change, spoke directly to me and my own experience as a Jew growing up in America. I was not white when I was a child. I have been through most of my adulthood. But if the neo-Nazis chanting at that Unite the Right rally last year in Charlottesville have anything to say about it, I will not be again in the future.

I was also interested in the historical resonance. I recently completed the extremely well-written (and incredibly massive) biography of Ulysses S. Grant by Ron Chernow. The historical “eight years in power” that Coates refers to in the title of the book largely overlap the years of Grant’s administration. Grant attempted to guarantee civil rights for the newly freed slaves in the South, and broke the 19th century incarnation of the Ku Klux Klan. But the resulting backlash of white supremacy swept away his achievements, and those rights that were held most dear and paid for in blood.

That the backlash in the 19th century looks all too much like the backlash after Barack Obama’s election and administration in the 21st is all too poignant. And frightening in the intensity of its fear and hate, and in the depths of its depravity and its denial that there is anything wrong that still needs to be addressed.

America was founded on and prospered because of two original sins. One was the theft of the land itself from the Native Americans who already lived here, and the generations upon generations of continuing theft, pillage, murder and suppression, all sanctioned by law.

The second original sin is chattel slavery, the kidnapping of people in Africa, their shipment to the U.S., and their continued bondage, exploitation, theft, pillage, murder and suppression, all sanctioned by law. The wealth and prosperity of this country was founded on slavery, and the suppression of the descendants of that crime continue to this day. And tomorrow.

If the arc of history does bend towards justice, it seems to operate on a geologic scale of time. What feels more real is that for every swing towards what seems like progress, there is an equal and opposing backlash that feels worse than the oppression that went before, because once there was hope, and then there isn’t.

Which sums up a lot of liberal feelings about the election of Trump, after eight years of a President who was intelligent, thoughtful, statesmanlike, progressive, an always informed if not always inspiring speaker, and scandal-free – but who just so happened to be black, which is an original sin that too many people cannot forgive. Not because he was a bad president, but because he was a good one. Not perfect, but then no human is. But good.

And in the eyes and hearts of white supremacists, his Presidency is something that must be erased or delegitimized at every turn. Because it is proof that truly anyone can hold the highest office in this land.

Unfortunately, the current occupant also proves the exact same thing. Anyone can be President. But Obama appealed to the better angels in our nature, where Trump continues to build his base among the worst elements of repression, racism, anti-semitism and suppression of any and all people who are not just like him, meaning white, male, Christian, heterosexual, and rich.

Reality Rating A: Some of the above is personal. And while it isn’t directly about the book, it also is. We Were Eight Years in Power combines essays that Coates published in The Atlantic during the course of Obama’s administration, one for each year, with a framing narrative that is his own personal story of who he was at the time, what he was trying to accomplish with his writing craft, and how he felt both about what he was writing and about the issues that he raised within it. He places himself, his research and his writing within the context of the black writers who came before him, and attempts to set himself in the context of those who will come after.

Some of the early essays are a bit dated, and occasionally it is obvious that the writer was still honing his craft. The later ones are searing in their intensity, as the author marshalls both his facts and his passion in service of stories that need to be told and things that must be said, but unfortunately seldom are.

The ending is hard to read, because we know what came after. And there is a bit of an element of what should be “preaching to the choir” but isn’t. Because I agree with the author that so much of what caused the rise of Trump is racism (along with its terrible brethren, xenophobia, misogyny, homophobia, anti-Semitism, Islamophobia and all the rest of the fearful hatreds of people who the perpetrators perceive as “not like them” and equate in their minds to “less human”).

But too few writers seem to be willing to call it by its name. Because until this terrible history, and the present that derives from it, is acknowledged as exactly what it is and called to account, it can never become the past, and we can never move forward.