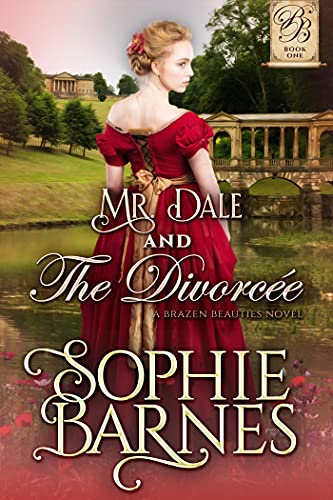 He's a respectable barrister...
She's the most scandalous woman in England...

Wilhelmina Hewitt knows she's in for a rough ride when she agrees to help her husband get a divorce. Nothing, however, prepares her for the regret of meeting Mr. Dale on the eve of her downfall. No other man has ever sent her heart racing as he does. Unfortunately, while she’ll soon be free to engage in a new relationship, no respectable man will have her.

James Dale would never pursue another man’s wife. Or a woman reputed to be a deceitful adulteress. Furious with himself for letting the lovely Mrs. Hewitt charm him, he strives to keep his distance. But when her daughter elopes with his son, they're forced into a partnership where passion ignites. And James soon wonders if there might be more to the divorcée than meets the eye.

As I’m posting this review the day after Thanksgiving, I want to start out by saying this book made me really, really thankful that I was born in the latter half of the 20th century and not any damn earlier at all. But I’m also feeling kind of sorry that I plan to read a book I would have liked better for the holiday – or at least felt less conflicted about.

The story feels historically accurate, at least as far as the amount of control and agency that women had over their own lives during the Regency period. Whether it actually is or not, the situation that the heroine is in matches the way we believed things were during that time, or the image that has taken hold in the popular imagination.

Which, quite frankly, is that she has no agency or control at all.

This is a story about a woman who only has as much control over her life as the men in her life and society in general allow her, which is not much. The only control she has is over how much of herself she is willing to sacrifice, knowing that she will always be the one to pay the price for that sacrifice no matter who might truly be to blame.

The first half of this one left me on the horns of a giant dilemma. Because the heroine’s actions and society’s reactions felt true to what we expect of the time. She’s put herself in a terrible situation for reasons that were never in her control, and society punishes her for it exactly as one expected they would.

Which means that both she – and the reader – get repeatedly slapped in the face with just how terrible conditions for women could be.

I very nearly DNF’d at that halfway point, because I was getting really tired of the smell and the taste of that wet fish of horribleness. Not that it’s written horribly, as the author writes well and I generally like her books, but that the situation the heroine is IN is horrible and at that halfway point seems as though it’s only going to get worse as it goes.

That was the point where the son of the man who raped her 20 years ago makes it clear that he has the exact same plan as his vile old man and isn’t planning to let anyone or anything stand in his way, either.

You could call that a low point in the story. It was certainly a low point in my reading of it and I stopped for a while and picked up something else.

But I picked it back up because I thought the worst had to be behind me. And the heroine. And it was.

Escape Rating C: For a story that actually does have a happy ending, this is kind of a sad story for a lot of its length. Mina’s entire life seems to have been about being stuck between a rock and a hard place and letting herself be ground between them in one way or another.

Letting herself be divorced at a time when the only way for her husband to be allowed to remarry afterwards was to accept all the blame, all the calumny, all the social opprobrium and for both of them to commit perjury that she had numerous affairs when she never had any seems harsh and is harsh and society deals with her harshly as a result.

Her ex-husband leaves the country, marries his pregnant lover, and society forgets him except as her victim. She has to suck it all up and move on, which she honestly does. At least until her widowed daughter falls in love with a man whose father will not allow the marriage because of Mina’s reputation as a scarlet woman.

(Whether any of the scenario around Mina’s divorce was legal or possible at the time this story takes place seems to be a matter of some debate.)

The young couple elopes to Gretna Green, the older couple chase after in hot pursuit, and truth gets revealed all around – after more than one misunderstandammit.

This is a story where the happy ending is earned through a whole lot of blood, sweat and tears and a very literal change of heart on the part of the hero. Who was in serious need of getting the stick out of his ass.

I ended this with mixed feelings, which was a definite improvement after my near-DNF at the midpoint.

I liked both that the main romance of this story is between two people who are on either side of 40 instead of barely over 20. It made the situation much more complex and the characters more interesting because they had more depth as well as more emotional baggage.

I also liked that the member of the nobility who featured prominently in the story was the villain. The hero is part of the upper middle class. His family has land but no title, and he is a practicing lawyer. He works for a living, something we still don’t see often enough in Regency romance but does seem to be on the uptick.

So I want to say that this story did gel for me after all. Except it jelled kind of like the two-layer Jell-O cups where the top flavor is one I hated and the bottom flavor was one I almost liked. But a lot of reviewers absolutely adored this book so reading mileage obvious varies on this one.