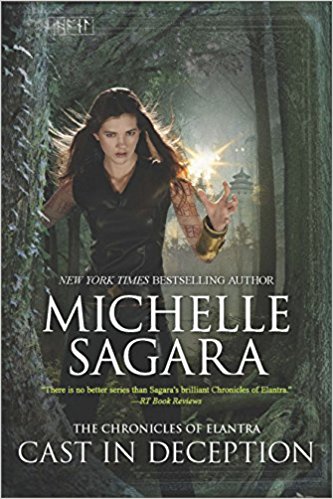 Private Kaylin Neya thought her home couldn’t possibly get more crowded. But when one of her housemates, Annarion, decides to undertake the Barrani Test of Name, his friends refuse to let him face his task alone—and Kaylin’s sentient home, Helen, is the only structure capable of shielding the rest of Elantra from the magnitude of their power.

Annarion and Mandoran almost caused the destruction of the High Halls once already. Add nine of their closest friends, and the danger is astronomically higher—especially since these guests are at the heart of a political firestorm. Imprisoned almost a millennium ago, their recent freedom threatens the rulership of several prominent Barrani families, and the machinations of those Lords make it almost impossible to tell friend from foe.

As political tensions ramp up, the shadows beneath the High Halls are seeking a freedom that has never been possible before. Kaylin must find a way to keep those shadows from escaping, or that freedom will destroy her city, the empire and everything she holds dear.

I originally said that the Chronicles of Elantra series was urban fantasy in a high or epic fantasy setting. Our point of view character is Private Kaylin Neya, a member of the Hawks, meaning law enforcement, in the city of Elantra.

Elantra is populated not just by humans, but also by Leontines, Aerians, Thallani and Barrani (read elves, sort of) and ruled by Dragons. While only the Barrani and the Dragons are immortal, even the non-immortals make the reader think more of epic fantasy than urban.

At the same time, Kaylin’s very lowly position among the local equivalent of the police did put her in the way of solving crimes and mysteries in her city. But even though that’s where she started, that’s not where she is now.

Instead, Kaylin has become a wild card among the political movers and shakers of Elantra. Not because she wants power, but because they began by seeing her as too ephemeral to cause any problems, only to discover that it’s her mortality that makes her so interesting.

One of the problems with being immortal is that everything gets boring after a while. Being around Kaylin is never, ever boring. Often dangerous, frequently chaotic, occasionally life threatening, but never dull, not even for a second. Kaylin is such a chaos magnet that she actually makes boring look desirable in comparison.

The story in Cast in Deception, like all of the stories in the Chronicles of Elantra, is about Kaylin dealing with the unexpected consequences of her previous actions – hopefully before someone gets killed, war breaks out, or both.

But as the events of this story are the results of so many that came before it, this is a series where it is probably impossible to get in at this point. Events, and people, in this series layer upon each other, well past the point where the only way into Elantra is from the very beginning, with Cast in Shadow. Kaylin’s life and her world, or at least her perspective of it, were much simpler back then.

It is also possible to start with the prequel novella, Cast in Moonlight, which tells the story of how Kaylin became a Hawk – which was not what she intended. Kaylin’s actions often result in things which she did not intend, frequently to the dismay of anyone else even tangentially involved.

The scope of events of the series have become epic, but it is epic in a way where the author does not seem to be leading toward some ultimate battle between good and evil. Not that there are not evil forces, but rather that those evil forces don’t seem to be personified, or at least not yet. In some ways, it seems as if the evil force they are resisting is entropy, the winding down of the universe, rather than true evil. This may be resolved later in the series.

The story in Cast in Deception relates directly to events in Cast in Peril where Kaylin rescued a group of young Barrani from centuries of an imprisonment designed to increase the power of their families. It was a ceremony that backfired spectacularly, and Kaylin rescued the much changed young people who emerge.

But that cohort of people have become threats to the High Halls of the Barrani, and there are forces both within and without that are attempting to keep them from claiming their birthrights. Some of those forces are embodied in people that Kaylin thinks of as friends, and others may be part of the dreaded Shadow.

But all of it is politics as usual among the extremely political, immortal Barrani. And if there’s one thing Kaylin hates more than anything else, it’s politics. Which doesn’t stop her (as nothing ever does) from rushing in where angels fear to tread to pull her friends out of grave danger, even if that merely puts her in danger with them.

Escape Rating A-: I absolutely adore this series, and wait eagerly for each installment. At the same time, this is a world creation that has become very, very dense, with lots of characters and epic amounts of backstory, and it always takes me a little ways (and a bit longer each time) to get into the book to feel myself catching up. Then, of course, it takes me an equally long time to emerge from the book hangover. Elantra is difficult to get into, and equally difficult to leave.

As much as I love this series, and this particular entry in it, this particular story feels like it doesn’t take up a lot of “world time” and it feels like not much gets resolved by the end. At the beginning, the cohort of formerly lost Barrani were lost again on their way to take up their birthrights. By the end of the story, they have managed to make their very dangerous and nearly deadly way to Elantra, but the political challenges are all still yet to come. But as always, I was happy to travel along on Kaylin’s journey.

Hopefully in the next book, hopefully next year. And now the countdown begins!