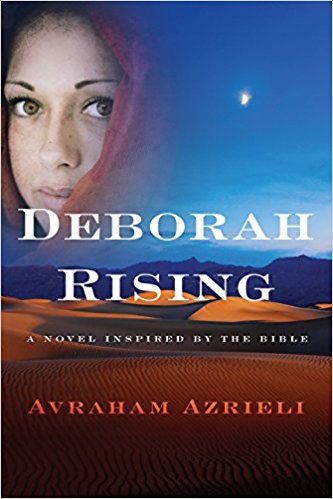 In the tradition of The Red Tent, The Fifth Mountain, and The Mists of Avalon comes this absorbing historical novel that reimagines the life of one of the Bible's most revered women, the prophetess Deborah, and her epic journey to fulfill her destiny.

Deborah's father dreamed that his daughter would one day become a prophet of the God of the Israelites. But the social and religious mores of her time dictated that a woman must marry—even against her will—and obey her husband. When Deborah is forced into an engagement with the violent son of her local judge, the young Hebrew woman rebels, determined to forge a new path.

Captivated by the notion of transforming herself into a man to escape the arranged marriage and fulfill her father's dream, Deborah embarks upon an epic journey across the desert to find a mysterious elixirist rumored to be blessed with the gift of turning women into men. It is a journey that proves increasingly perilous—filled with wild beasts, lustful men, unscrupulous priests, and warring tribesmen. Yet Deborah discovers that she is not alone; an unlikely coterie of lepers, slaves, Moabite traders, and even a dead tiger come to her aid and defense along the way.

Part traditional biblical fiction, part adventure, Deborah Rising is a captivating tale about the early life of one of the most famous figures from the Old Testament—a woman of courage and spirit whose battle to overcome discrimination, sexism, and paternalism speaks to women's lives today.

The story in Deborah Rising is the very (possibly very, very) fictionalized account of the early life of the Biblical Prophet Deborah. Deborah was the only female judge mentioned in the Bible, and one of very few female prophets.

Based on this story, one also gets the feeling that Deborah lives up to a saying from The Notebooks of Lazarus Long, the one that goes, “A fake fortune teller can be tolerated. But an authentic soothsayer should be shot on sight. Cassandra did not get half the kicking around she deserved.” In this story of her early life, Deborah certainly suffers from all the kicking around that Long would have wished – and she hasn’t even started to prophesy yet. 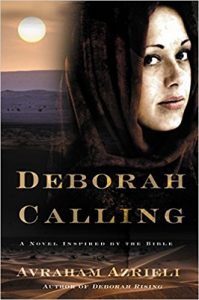 Then again, when the story ends she’s only 14. She has time yet. And another whole book (Deborah Calling) in which to start speaking truth to power. And speaking with the power of truth.

But for the course of this book, she is also an unfortunate example of “when bad things happen to good people” and just how those good people react. Not that Deborah’s life wasn’t good for most of her childhood, because it was. But a year before the opening of the story, disaster struck.

Her parents were murdered, supposedly by raiders from another tribe. She and her sister were taken in by the local Judge (read ruler) of their town. Not out of the goodness of his heart, because I don’t think he has any. Rather, because the land their parents owned included a cistern – not merely a well but an underground protected water source. Water is worth more than gold in the dry land of Canaan.

Deborah and Tamar have no brothers. They each inherit a half share in the land, but can’t really inherit it. Their half-shares pass to their husbands when they marry. The Judge has a 20 year old son, and the Judge expects that he will obtain the land by marrying first one sister, then the other – whether they want to marry him or not.

The Judge’s son, Seesya, will let absolutely nothing stand in his way. Not poor Tamar, not Deborah, not the law and not the commandments. He takes what he wants, when he wants and how he wants, with as much cruelty as he desires. And he seems to desire endless amounts of it.

All Deborah wants is to escape. She will do anything to escape. Even, if she can, become a man.

Escape Rating B: In the end, this turned out to be a wow! I felt compelled to keep reading, and could not stop until the end.

But as much as I was riveted to the pages, there were some things that bothered me, often quite a lot.

The comparison is being made between Deborah Rising and The Red Tent. I read The Red Tent many years ago, and enjoyed it, but I do not remember it being quite this grim. Every circumstance is against Deborah all the time. The circumstance that she is female means that she has no power of any kind, and is only supposed to endure every terrible thing that happens to her. While that may have been true, we see nothing but terrible things happen to her. At times it makes for hard reading.

The story of Deborah the Judge may end in triumph, but we do not see any of that here, only one catastrophe after another. For every step forward she makes, she seems to take three steps back, and all of those steps over a bed of nails.

Part of what motivates Deborah in her quest is the Judge’s son Seesya. He makes perversely good motivation, because he seems to be evil for evil’s sake. To survive, Deborah must evade him at every turn, because if he catches up to her she will die.

That Seesya and his father want the land makes sense. That cistern represents untold wealth in the right hands – hands like the Judge’s, that will exploit the precious resource in every possible way.

But Seesya’s pursuit of Deborah isn’t just about the land. It’s personal. He hated her sister, he hates her, and he wants to kill every single person with whom she has contact. As a character, he is so sick and twisted that we can only see the twistedness – we don’t understand why. He’d be scarier if we knew what was motivating him.

One of the interesting twists in the story is Deborah’s quest to become a man. It is not about gender identity as we understand it today. Instead, it is a response to her circumstances. If she had been born male, she could have inherited the land from her parents and protected her sister from marriage to Seesya. She could learn to read and write. She could become the prophet that her parents hoped that she would become. Life as a man, in her time and place, would give her at least power over her own body and her own life. She could testify in court, and she has plenty to say. She could fight back.

Her desire to become male makes sense under her circumstances. However, it feels as if every single person involved in her quest is lying to her in some way, quite possibly for what they believe is her own good, but lying nonetheless. And she is too naive to realize it, or at least to realize it yet.

The story in Deborah Rising does not feel complete – only because it isn’t. As this book ends, Deborah’s quest has just barely begun, and there is no certainty within the story that she will succeed. Also, it doesn’t really feel like it ended at a natural point in the story, which continues in Deborah Calling.

I’m looking forward to seeing the rest of how the author fleshed out this Biblical story. And I want to see Seesya get his just desserts. Or even just see him dead in the desert.